The Incredible Hulk Donut at 7-Eleven 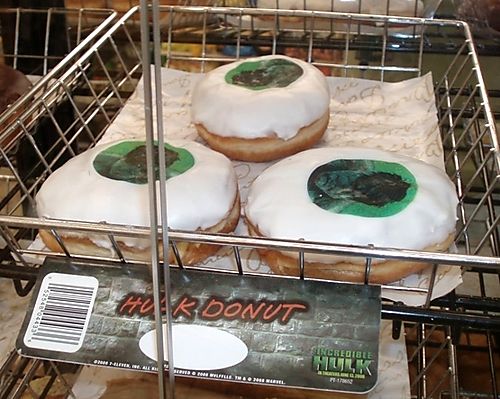 The Incredible Hulk is big and green, but his promotional tie-in assault has been rather petite and more off-white in hue. My old friends at 7-Eleven have tried to drum up interest for the new Edward Norton-powered “Incredible Hulk” film by trotting out a new round of lenticular Slurpee cups, preferably filled with the “Radiation Rush” ice drink. Because nothing says dee-lish quite like a mouthful of freezing green slush intended to represent one of the most poisonous substances known to humankind.

Oh, and there’s a donut too. 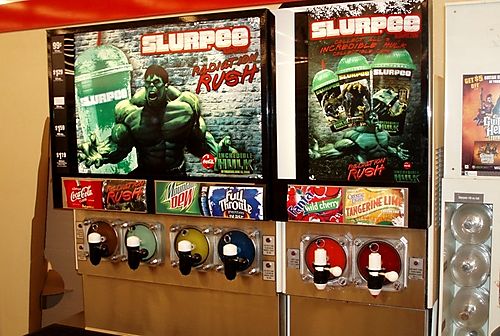 The Hulk donut is hilarious when first encountered. Stuck among the torn and battered remnants of the morning commute sugar rush, the donut stands out from the pack because a) it has a gigantic Hulk sticker slapped on it and b) nobody has bothered to purchase one. Seriously, I’ve visited three 7-Elevens in my area and they were all fully stocked with donuts well into the evening. Hulk sad.

Against my better judgment and setting aside my recently-induced phobia of donuts (look for that chilling story in my upcoming autobiography, “So What Donuts Are Good Here?: A Tale of Desperate Employment,” due autumn 2018), I purchased one of these lonely, frosted bastards in hopes of developing a stronger understanding of what a Hulk donut could possibly taste like.

Here’s the calorie bomb in its original unforgiving paper cage, right after a successful liberation from the syrup-stained jungles of a suburban 7-Eleven. Hulk looks confined, enraged, and delicious. 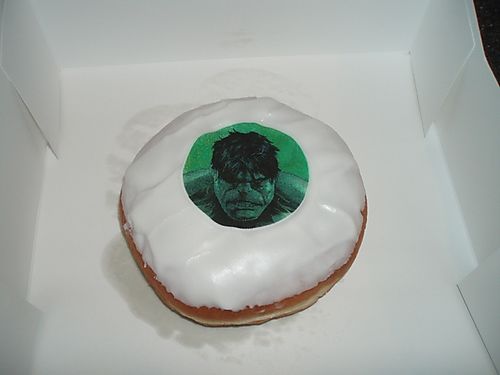 The Hulk donut is a standard-issue yeast-shell containment device with vanilla frosting and an edible Hulk sticker affixed to the top. At least I hope the sticker was edible. I just assumed, but with 7-Eleven, you never really know.

From the outside, it’s just a peculiar sugared orb. Scrape off the Hulk sticker, and it’s the type of nondescript donut that’s traditionally passed over at offices everywhere as the dreaded “jelly one,” even if the thing doesn’t actually contain jelly filling. It’s a lonesome road for the yeast-shell donut. They’re the Bobby Brady of the morning treat ritual.

However, the Hulk donut contains a surprise! If you cut the superhero’s face in half, it reveals a soft, gloppy puddle of green frosting, adding a sweet punch to the fried dough that wasn’t expected. Frankly, I had no idea what could be brewing inside the donut. I pestered the frustrated clerk at 7-Eleven for answers, but she only winced and shrugged dutifully, perhaps gobsmacked someone was actually whipping out a wallet to buy one of these silly things. Maybe there’s a franchise-wide betting pool going on, and the winner is the store that sells the least amount of Hulk donuts. Perhaps I just screwed up her shot at a treasured Applebee’s gift card. Christ, now I feel just awful. 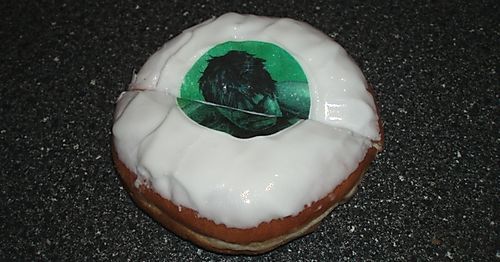 Once Hulk is sliced open (an act that, if nobody is around, should be performed with maximum dramatic effort), the green frosting slowly bubbles out to appreciate the daylight. For added fun before ultimate consumption, you can pretend that Hulk’s gummy brain is pouring out in viscous clumps after a brutal encounter with Abomination. 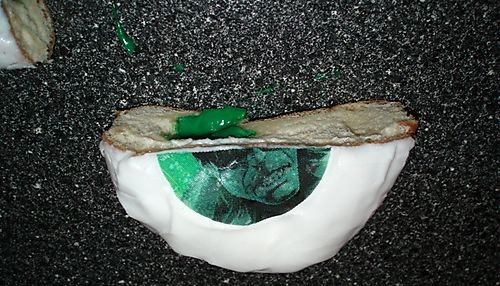 Buckle up for this statement, but the Hulk donut tastes like…a donut. *raspberry* The emerald frosting within, a substance I affectionately dubbed the “Gamma Goo,” is a nice thematic touch, but there’s really nothing Hulkish about the flavor. And I swear I could feel the artificial crunch of the sticker as I took a bite. Edible stickers...sheesh. Is nothing sacred?

Does the Hulk's head taste more or less delicious than the parts that don't include his image?

A little review about the character and his not so incredible image :