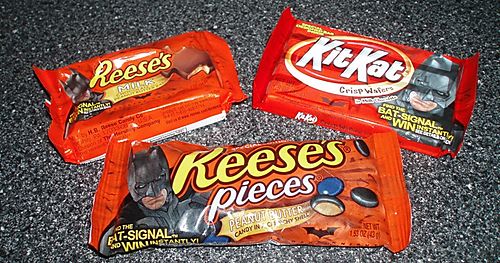 Perhaps the only thing Batman loathes more than the Joker’s anarchic reign of terror in Gotham City is a trim figure. How else to explain the latest piece of “Dark Knight” promotion: the Reese’s candy assault of teeth-melting treats.

Candy and movies have such wonderful chemistry, going together like summertime and Sunkist two-liters or Mike Myers and fervent fanboy message-board hate speech. The new Batman film, “The Dark Knight,” has glad-handed every form of media around to spread word of the film’s July 18th debut, so why not kid-friendly sugared distractions? Well, it’s a little odd, seeing how the upcoming motion picture looks impressively hostile and visually nightmarish, but who am I to argue the tactics of promotional goons who would probably sell their own mother to secure Batman a spot as Gerber’s new pitchman.

I caught a glimpse of these brooding beauties at the local gas station while paying my weekly rape tax to drive a car, and I had a laugh. Seeing how money was already flowing out of my wallet, I figured a few “Dark Knight” sweets wouldn’t hurt. However, the clerk, in a rare moment of monetary compassion, pointed me to a cheaper pathway where I could achieve the same peanut butter candy results at 1/3 the price. Bless his heart. I had the embarrassing job of explaining to this guy that no, I just wanted the bat goodies.

In a twist that’s ultimately best for all parties involved, the “Dark Knight” tie-ins don’t muck with the classic flavors; instead the selections try to theme their way out of gastronomic disappointment. Honestly, I wouldn’t know what a Batman candy could possibly taste like, so I’m grateful the Hershey Company didn’t blend some awful concoction together in the name of a fleeting experience (“Now Joker-flavored with green apple and orange filling!”). Let’s just keep the peanut butter cups peanut butter, fellas. No tricks.

The first suspect in the line-up was the bat cup, and it’s fairly respectable approximation of Batman’s classic insignia. For a lump of chocolate and “peanut butter,” it’s at least shaped accordingly, even if that shape is somewhat plump and sadly melted to one side. It certainly isn’t a familiar cup presentation, so kudos to the candy wizards who tried to bat-up the design, even if the finished product resembles more of a brown mountain range or E.T. lying down. In fact, the P.B. patty is the coolest member of the bunch, giving a distinct Batman air to the experience of eating the same delicious garbage that’s been on store shelves for nearly a century now. Thank heavens the bat shape topped the less popular follow-up design: the “Maggie Gyllenhaal” cup.

The next caloric nightmare up is the Kit Kat bar and, again, nothing has been altered ingredient wise. The trick about the Kit Kat is the printing found on the bar, which factors into the candy’s sweepstakes. If you rip open the packaging and find the Bat-Signal, you win…something. I’m not sure what the prize is actually, I just tore the wrapping apart and found a note from an old enemy informing me that I was a loser. 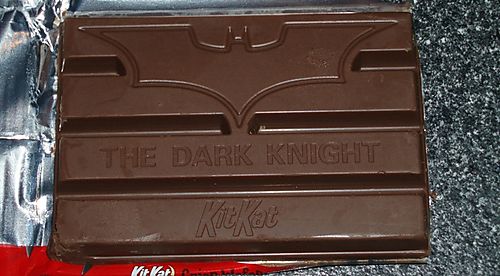 You gotta love the trivia question.

A small sack of Reese’s Pieces is the final leg of the Batman candy adventure, and perhaps the least impressive. Without needed room to shape the tiny bits of candy into iconic visual aids, there’s little to be done to the Pieces beyond simple coloring. Here, the candies are black and blue to represent Batman’s outfit or the condition of the baddies who run across Batman during “Dark Knight,” if you want have more fun with it. Again, the taste is familiar (they were good enough for E.T., they’re good enough for Batman), only the visual experience has been altered.

The Batman candy isn’t going to disappoint anyone, but there’s no trace of inspired tie-in insanity that marked the Indiana Jones marketing flood waters that only recently receded (seriously, coconut Snickers?). However, these beauties are the perfect pacifier for anyone who has ever complained that peanut butter cups are “too predictable” or found Kit Kats to be lacking thought-provoking trivia options. 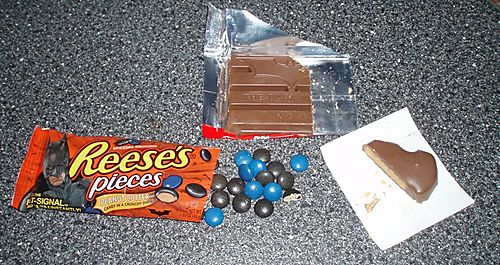 if you enjoy these peanut butter cups, i recommend checking out the dark knight site reese's made. you can create your own video destroying the bat candy and possibly win some nice prizes! there are some pretty funny videos, check em out!!

Great posting! Love the pics - I've been wondering was was inside those promotional wrappers. I'm also a big fan of the Reeses shapes - tree, egg, heart - they seem to have more peanut butter (and it looks like the mountain range does to!) Yay!

I need Batman candy this halloween. This is my final curtain. I am selling my ensamble and need to do a photo shoot to sell. Being in character and stealthy I can not offer further info. :-)