Film Review: You Don't Mess with the Zohan There’s much to celebrate in “You Don’t Mess with the Zohan,” which marks the return of Adam Sandler to an unhinged level of farce he’s been trying to stifle recently in his career. However, “Zohan” is like a second piece of birthday cake: it looks and tastes terrific, but it’s just too much indulgence. Hey, I’m just thrilled Sandler has stopped trying to pluck heartstrings for the first time in a long time.

A Mossad agent who’s impervious to pain and holds a magnetic disco charm about him, Zohan (Adam Sandler) dreams of a day when he can stop thwarting Palestinian attacks and fulfill his dream: to become a hairstylist. Faking his own death at the hands of terrorist Phantom (John Turturro), Zohan boards a plane and heads to New York City, where he finds employment at a salon run by Dalia (Emmanuelle Chriqui). Once given his chance to cut hair, Zohan turns into a sensation, making the community’s older women swoon with his gyrations and sexual finishing moves. The newfound attention alerts an old Palestinian enemy (Rob Schnieder), who tries to destroy Zohan with help from his Hezbollah brotherhood.

Yes, it’s true: Adam Sandler has made an action comedy using the Israeli-Palestinian conflict as a background.

As is expected when playing silly in these political minefields, “Zohan” is not a film to be easily shrugged off as another blissfully dopey Sandler concoction. Sure, it’s a farce, playing very broadly at every possible turn, but it’s a strangely brave motion picture, daring to poke a stick at an exceedingly volatile situation. Sandler means well enough, coating the film with an obvious “why don’t we get along?” message that will baffle the less geopolitically aware, but there’s something to admire about a film that dares to step into uncomfortable areas and try to conjure some laughs.

Trouble is, those laughs aren’t exactly raining from the sky in “Zohan.” Written by Sandler, Robert Smigel, and Judd Apatow, the picture is a sprawling, slippery collection of half-realized ideas. The writers splatter their every last whim across the screen, and it leaves director Dennis Dugan (a Sandler specialist, marking his fourth film with the actor) baffled where to take the story next. At 110 minutes, “Zohan” is much too long to make a lasting comedic impact, and several plot threads are left out to dry from neglect (most notably, the romance between Zohan and Dalia). It can be a tiring film, suffering from Sandler’s exhaustive idea inhalation, and the enterprise runs out of steam long before the film concludes.

However, it’s a picture worth a recommendation.

Even when “Zohan” loses control, especially in the final half-hour, it remains a feature of undeniable fascination and unusual edge. With “Click” and “Chuck & Larry,” Sandler played softball; “Zohan” has Sandler throwing curveballs again, piling on the absurdity with the same zeal he once held in his youth. However mediocre the quality of the jokes are in the picture, it scores some pretty potent laughs when focused on Zohan’s amazing sexual prowess with senior citizens or his high-flying action figure poses, displayed as the character pinballs around New York architecture to save the day. There’s also sizable laughs squeezed from Zohan’s salon theatrics, where the most dangerous man in the world prances joyfully around, thrilled he’s finally received his treasured chance to make the world “silky smooth.”

I didn’t find “Zohan” especially offensive, and the film’s intent is so sincere it seems foolish to suggest political irresponsibility in a picture that features rear nudity from Lainie Kazan and Rob Schneider as a Middle-Eastern taxi driver. To help soothe nerves, Sandler has called in a horde of celebrity cameos to soften the blow, and even hired boxing announcer Michael Buffer for one of the film’s many villain roles, embellishing the cartoon nature of the picture further.

It’s not a sturdy feature film, but there’s just enough chutzpah to “You Don’t Mess with the Zohan” to keep it amusing and sporadically uproarious. It’s a decent comedy construct: a film one unforgiving editorial pass away from greatness. 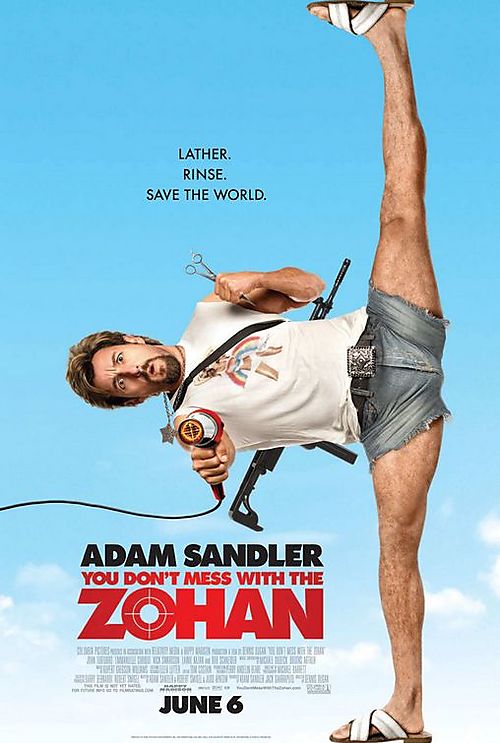