It’s not the familiarity that ultimately undoes “Wanted,” but its uncharacteristic reserve. A back-flipping action bonanza, “Wanted” is an adult cartoon, taking acts of death-defying stupidity to their most illogical extreme, and that’s exactly where this outlandish visual buffet should stay.

Trapped in a dull life with a soul-crushing cubical job, a cheating girlfriend, and no money, Wesley Gibson (James McAvoy) is lost in his own life, unable to claw his way out from underneath his depression. Into his world comes Fox (Angelina Jolie), who takes Wesley to meet Sloan (Morgan Freeman), a secretive man who oversees The Fraternity: a collection of highly-trained, super-human assassins. After learning that his father’s death has left him a spot on the team, Wesley reluctantly undergoes tests of strength and endurance, pushing himself to unleash his extraordinary gifts. Now fully settled into his new life as a hunter, Wesley learns some ugly truths about The Fraternity that force him to confront those he trusts most.

“Wanted” is one of those high-octane, fist-pumping, soda-hurling experiences that make summer multiplex entertainment so much fun. Director Timur Bekmambetov assaults the screen with bracing visuals, taking great stock in bullet-time theatrics and CG-enhancements to a point where “Wanted” feels just like an animated movie. It’s not an especially intellectual motion picture, but more an optical flame-thrower for the first hour, with the director pulling out all the stops to announce “Wanted” as a film cocked and loaded with exclamation points pointed in all directions.

Betmambetov’s previous films, the Russian fantasy two-pack “Night Watch” and “Day Watch,” allowed the filmmaker to sharpen his visual effect skills, and all that exhaustive training comes out to play during “Wanted.” The film is teeming with Betmambetov fingerprints, from a fixation on uneasy textures to the lawless action, playing acceptably into the director’s field of vision. He’s having ball with his English-language debut, falling in love with The Fraternity world: the textile factory/slaughterhouse base of operations, the health-replenishing wax baths the assassins take to cure wounds, and the sheer ballet of bloodshed as the warriors engage in hyper-warfare by “curving” bullets and nailing gravity-defying kill shots. It’s a tapestry of absurdity, yet the director shapes it into a spellbinding sit for the first hour, gulping down the nonsense with a completely convincing photographic bravado.

Following Wesley as he grows from “Fight Club” mouse to “Matrix” lion is a far more enchanting arc than it has any right to be, if only because Betmambetov keeps the film’s outlandishness out in front to stun the viewer, while the rest of the film breakdances like a madman to keep the pace at top speed. The filmmaker is dealing with ridiculously clichéd visual gimmicks, but there’s a consistency to “Wanted,” a veritable fantasy world created, that helps to swallow the malarkey that’s routinely offered by the camera.

Would you believe The Fraternity actually receives their kill assignments from a mystical loom that foretells destinies? It’s that level of reality that Betmambetov saves from complete laughter with his visual ferocity.

However, what goes up must come down. Once “Wanted” moves over to the second half, the picture strangely begins to buy into itself, turning an agreeably violent, heavily caloric distraction into a battle of fates as Wesley starts to take his role in The Fraternity very seriously. Once “Wanted” becomes a tale of revenge instead of discovery, the whole film deflates into over-plotted nonsense. The fun is scooped right out of this sucker, replaced with a punishing sense of obligation, where the filmmaker tries to overcome the movie’s newfound solemnity with a late-inning presentation of excessive, nasty violence and multiple explosions.

Let’s just say the climax of “Wanted” involves epic posturing of familial revenge, a deafening Busby Berkeley-style shoot-out, and an army of lethal rats, their bellies filled with peanut butter and explosives.

It’s disappointing that “Wanted” abandons its sense of humor, but that doesn’t completely rob the picture of some wildly infectious material. It doesn’t maintain its pitch, but “Wanted” is still a rewarding rocket-powered ride of escapism, damn near-perfect lunacy at times. 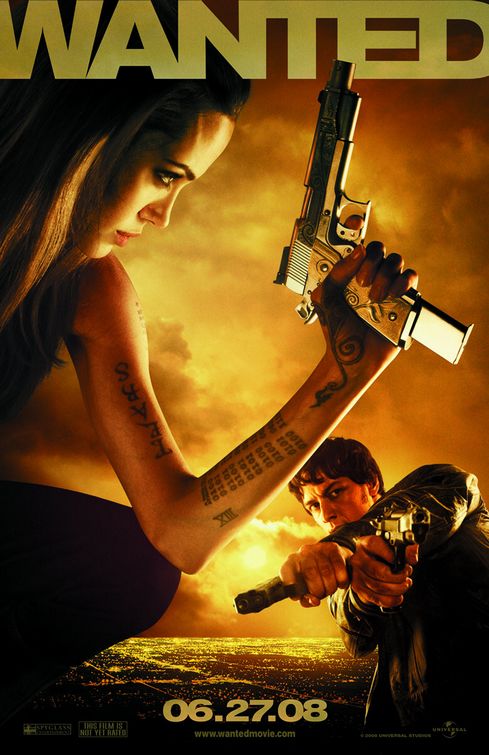 you give this film a "B" but WALL-E a "D"?!
the greater moral evil is a corporation espousing a seemingly hypocritical agenda regarding gluttony and irresponsibility instead of an ethically vacuous utilitarian, vigilante blood-bath cartoonishly lulling you into 'escapism' and apathy?

you are a magnificent logical specimen, aren't you?

Overused CGI, a cliche story, and an adaptation that strays completely from its source material. I suppose this is what *you* would consider to be a masterpiece, ya dumb f*ck.