There was a character in the last “Austin Powers” film named, appropriately, Goldmember; he was a mischievous creation from star Mike Myers, performed with a goofy voice and an eye toward grossing out the room, but he ran out of entertainment steam early. “The Love Guru” is a cinematic equivalent of Goldmember: a semi-hilarious movie that corners itself too easily and grows tiresome quickly.

Offered a huge sum of cash and an Oprah appearance if he can reunite hockey star Darren Roanoke (Romany Malco) with his estranged wife (Meagan Good), the Guru Pitka (Mike Myers) bursts onto the scene, preaching a message of self-love and confidence to his followers. With the help of Toronto Maple Leafs owner Jane Bullard (Jessica Alba), Pitka indulges every last lesson learned from his teacher, Guru Tugginmypudha (Ben Kingsley), as he tries to help Darren focus on his gifts and ignore his psychological limitations. Along the way, Pitcka develops feelings for Jane, testing his sexual willpower and helping him to feel the same love he preaches about.

I wanted to shamelessly dig into “Love Guru,” if only to celebrate Myers’s return to live-action filmmaking after a long five-year absence. A ferociously talented and funny performer, Myers does have the tendency to chase fouled concepts of comedy all the way to the bitter end, as witnessed in some of the lesser moments of the aforementioned “Austin Powers” franchise. “Love Guru” is one of those low notes; a comedy of blissful intentions, but a failure of execution, caught between deafening notes of silly and screwy without any sort of road map to connect it all together.

Myers likes to play loudly, and while previous features have found a way to channel that energy into more level-headed screenplays, “Love Guru” is a free-for-all battle royal of slapstick and bathroom humor, giving Myers free reign to stroke whatever impulse pleases him. First-time director Marco Schnabel holds no control over the film, merely making sure the camera is in focus while Myers dances around in a long beard, fake nose, and plays up a second-tier Deepak Chopra act to middling results. Myers is the type of performer that needs a traffic cop on set, and Schnabel is just not that person. The filmmaker sets a lawless tone early with “Love Guru” and doesn’t do a thing to stop the proceedings from snowballing into a picture completely drained of laughs.

What I did enjoy about the film are the moments of Myers’s unbridled curiosity: the little buttons on scenes that could only emerge from a constantly whirring mind. “Love Guru” has pointedly uproarious sequences with Myers bouncing off his co-stars or making the camera his best friend, and the actor can sell impish sexual jesting like no other.

However, it’s criminal how much of “Love Guru” is lost to Myers’s other passion in life: genital humor. The actor is fascinated with the functions and durability of the midsection and the film spends an inordinate amount of time on bathroom humor (including a battle where the combatants hold urine-soaked mops). I certainly can’t argue that the potty material provokes a reaction, but Myers beats on this drum for far too long, taking the script to dead ends as he tries to find new ways to use the male genitalia as a punchline. We get it, Mike: testicles are hilarious. Move on, please.

“Love Guru” doesn’t start off promisingly, but it does have a zest about it that promises a more rousing time than what actually ends up onscreen. With several musical numbers, fun celebrity cameos, some pachyderm lovemaking, a crafty callback to “Wayne’s World,” and an affectionate send-up of self-help culture, “Love Guru” aims to please in a major way. However, allowed to indulge Myers’s questionable imagination to the fullest degree, and “Love Guru” wears out its welcome fast. 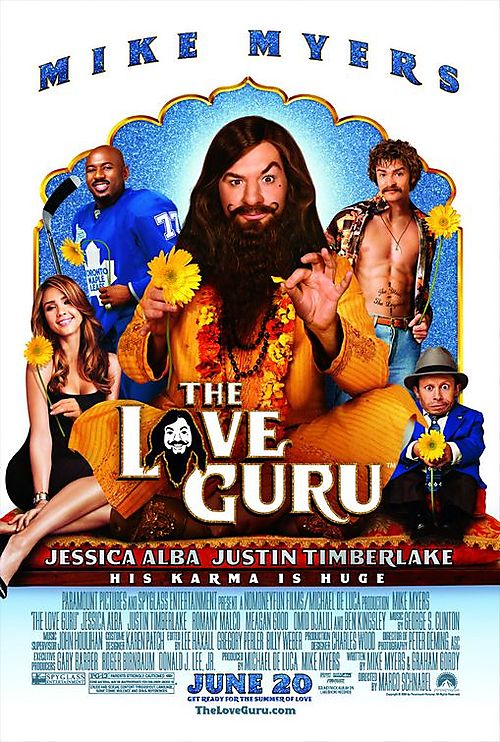 So you think this is better than Wall-E you a true jackass!!!