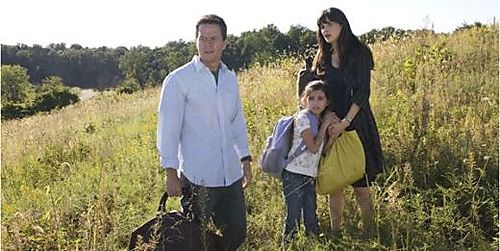 The opening movement of “The Happening” is a virtuoso guitar solo of alarm. It’s the sharpest collection of footage writer/director M. Night Shyamalan has ever committed to the screen, launching his latest picture on a giddy note of assured doom; a chilling introduction to the human race’s greatest adversary: the unknown.

When a deadly toxin is released into the air, it causes the public to lash out in violent ways, rolling out waves of suicides that officials are baffled by. When the panic hits Pennsylvania, high school science teacher Elliot Moore (Mark Wahlberg, miscast as a boy scout type) takes his wife Alma (Zooey Deschanel) and a small pack of survivors into the countryside to escape the invisible threat, finding bodies everywhere they turn. Suspecting a terrorist attack, Elliot looks for clues to support a logical explanation, but what he finds are answers that reach beyond the realm of human understanding.

Licking his wounds after the justifiable pummeling he took with the inane 2006 bedtime story “Lady in the Water,” “Happening” shows an exciting new level of aggression for the habitually lyrical Shyamalan. As the marketing trumpets, this is Shyamalan’s first R-rated feature, and “Happening” willingly doles out the nightmares as the bravura suicide sequences are revealed in lurid detail. Hairpins are jammed into jugulars, zoo employees encourage lions to snack on their limbs, and suburban dads crawl under lawn mowers; Shyamalan summons a bleak mood of mass death as it blows from city to city. It’s a blood-spurting, skin-crawling first act that’s worth the price of admission alone to witness the coldly reserved filmmaker revel in a bit of uncharacteristic pandemonium.

The rest of “Happening” slips helplessly into familiarity once Shyamalan fattens himself on the calories of the early going. Always a distanced filmmaker, I had hope that Shyamalan could ditch his beloved community theater atmospherics and try to forge new ground with this film, but the opportunity is squandered. “Happening” starts to resemble a retread of “Signs” in the second half, as Elliot and his “family” seek out abandoned homes in the countryside for shelter. The film exhausts its claustrophobia here, hopelessly bending to standard Shyamalan touches that he milked dry long ago. The more Elliot leaves the masses behind, the less special “Happening” becomes, tiring out Shyamalan’s imagination and his ability to properly unnerve the audience.

There’s no reason for me to reveal who or what is behind the deadly attack, but I will say it’s a fantastic starter pistol for a horror film. Unfortunately, Shyamalan doesn’t follow through on this premise, allowing “Happening” to slowly, painfully deflate as he scrounges to erect a button of terror for the third act and unearth fruitless emotional content between Elliot and Alma. Too many old habits break down the picture, especially the staccato rhythms of the acting and the script’s tendency to chase plot threads that distract the suspense further. “Happening” is only 85 minutes long, but it’s oddly winded by the conclusion, which effectively smudges the contact high of the throat-slashing, body-breaking commencement.

It’s become clear that if you’ve seen one Shyamalan film, you’ve seen them all. “Happening” promises a change of pace, but the magic only lasts for a few moments, then it’s all open acre isolation, media blackouts, and mysterious threats with extended, mouth-agape pauses. One could say these are endearing motifs, but I’m more inclined to reject them as Shyamalan’s crutches: acts of storytelling repetition that have grown moldy and dramatically inert. 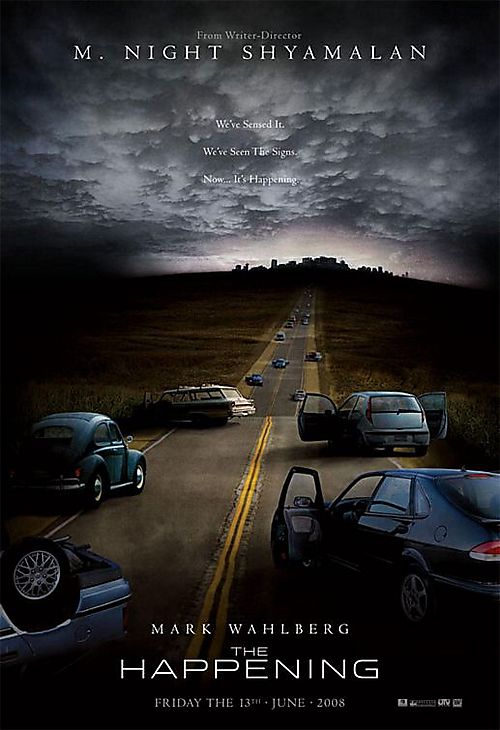 "it’s a fantastic starter pistol for a horror film"

Good line ... better than anything in "The Happening's" script.

You're too kind to the film. It's laughably silly in many key situations, and the dramatic elements (marital stress, for example) are handled as clumsily as a soap opera subplot.

what the hell is this movie all about???