Ah, white people. What can’t they do? “Children of Huang Shi” serves up another steaming pile of Caucasian liberation with the story of George Hogg, whose acts of heroism and benevolence saved a small army of innocent children and guaranteed him a spot as a future cinematic subject.

In 1930’s China as a journalist, Englishman George Hogg (Jonathan Rhys Meyers) stumbled around the countryside documenting the violent unrest between the Chinese and Japanese armies. With help from a Chinese partisan leader (Chow Yun Fat) and an American nurse (Radha Mitchell), Hogg is sent to the fringes of the combat zone, where he encounters a group of orphans desperately lacking a parental figure. Assuming the leadership role out of obligation, Hogg suddenly finds himself drawn to the boys’ plight. Now, with wartime devastation encroaching on all sides, Hogg and his pupils embark on an arduous 700-mile journey to locate safety and establish a solid future.

The true story of George Hogg is a fascinating testament to the man’s kindness and perseverance: how he took on the horrors surrounding him and molded a home for himself and his legion of Chinese orphans. To director Roger Spottiswoode, the opportunity to engage in inspirational hooey is much too tempting, and his leaden touch weakens the emotional impact a tale this extraordinary should elicit.

“Children” means well enough, but it’s a television movie in execution, forgoing the refinement of big screen nuance to paint with sloppy brush strokes of sentimentality and aggravating simplicity. Hogg’s tale allows for plenty of awe-inspiring interpersonal breakthroughs, yet Spottiswoode isn’t content to leave a layer of subtlety on the proceedings. He wants the audience to feel every act of Hogg’s selflessness as though they were in the presence of a deity; the director slowly, but surely, removes Hogg’s fallibility and all interest in his actions the more the film reaches for the heartstrings.

I can’t say I was immune to certain moments of the picture, most notably the introductory moments between Hogg and the hungry, lice-infested kids, who see the journalist as an invader to be thwarted. It’s also one of the few moments the monumentally miscast Meyers offers a hint of internal struggle to Hogg. Mostly the film is lost to the golden glow of sainthood; a label I wouldn’t dare challenge, but a screen sensation that doesn’t offer anything for the drama to chew on. Blunt attempts to take Hogg down clichéd romantic trails are lacking the same spirit; Meyers and Mitchell make for a handsome couple, but there’s little chemistry there to embrace or, frankly, believe.

“Children of Huang Shi” is too banal, too unadventurous to evoke a seemingly required teary-eyed response. It’s a tiresome, familiar picture playing softball to find the widest possible audience, not to mention giving respected art-houses that book it a bad name. Surely George Hogg had more dimension that what this film offers. His deeds were valiant, his film is a bore. 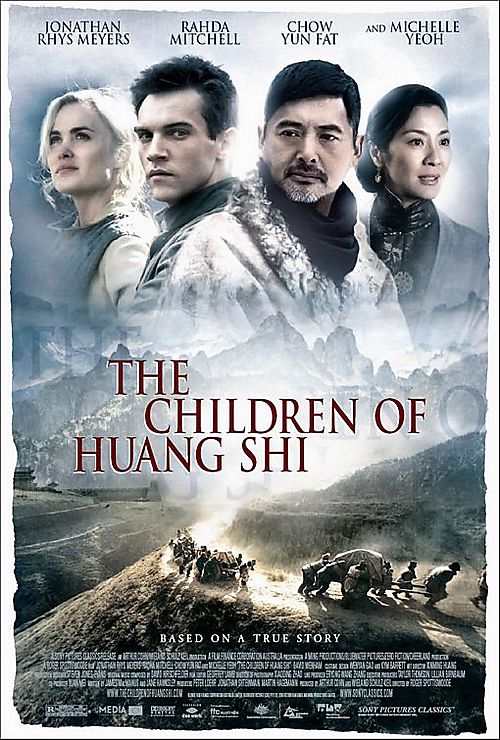 Well actually, white folks have done a lot about liberating many enslaved populations. Starting with a Civil War in the U.S., but consider also English outlawing of slavery (which is still practiced in African and the Middle East, with gusto), and don't forget stopping Nazism, etc.

What a foolish review . . . get educated before making such inane remarks.

Actually, Brian's review doesn't discuss enslavement at all. The film doesn't deal with the issue either.

You are a boob, "Truth in reviewing," and you need a sense of humor.

Please get one before making such inane remarks.

There is a great book by Vera and Gordon, Screen Saviors, that shows how often white men are the heroic "saviors" of people of color in US and other places. Rarely, the opposite.

And, actually, 200,000 Black soldiers (mosly former slaves) and 200,000 black support troops helped Mr Lincoln (when whites quit volunteering in large numbers) mightily to win the civil war, and to free themselves. In a real sense, the slaves freed the slaves.