Though it plays like a diluted version of David Cronenberg’s “Crash,” “Quid Pro Quo” impressively maintains a bewildering mood, probing into an underbelly of cracked minds and disturbing matters of desire. It frustratingly refuses to go bonkers, but the film is a compelling sit, brought to life by two very crafty, pointed performances.

Partially paralyzed since he was eight years old, Isaac (Nick Stahl) has made a name for himself reporting for a New York public radio station. When an anonymous e-mailer sends in a tip for a story, Isaac follows the clue to an underground support group where members share and demonstrate their desire to live life as disabled people. Baffled, yet utterly intrigued, Isaac’s attention is soon consumed with able-bodied Fiona (Vera Farmiga), a member of the group who probes Isaac for information about life in a wheelchair. The two embark on a sexual relationship, but the glow is quickly rubbed off when Fiona shares her twisted plan to join Isaac in paralysis.

“Quid Pro Quo” is a strange movie that should’ve been stranger. Writer/director Carlos Brooks arranges a familiar noir tone for his debut feature film, treating Isaac as a Sam Spade type who chases temptation with little regard for his own well being. It’s a fixated character, hoping to fashion a breathtaking piece of journalism that will rocket him to public radio stardom, only to find that his subject, Fiona, sternly challenges his own perceptions to a life-altering degree.

Encountering disabled fetishes, “Quid Pro Quo” really has the clearance to head in any direction it chooses, presenting the opportunity for Brooks to launch off into seriously depraved regions of thrillerdom as Fiona starts to shed layers of stability. “Quid” nails the early scenes of uncomfortable discovery marvelously, promising a lurid decent into unspeakable desires and stomach-churning results.

It comes as some surprise that Books doesn’t want to make a film of questionable taste, but a mild psychological study buttoned with a faint, effective plot twist. Part of me wanted to throw my hands up in disgust, while the rest of me felt OK with the unexpected trajectory. Books has some interesting visual cues in “Quid,” but his strength is with the actors, guiding Stahl and Farmiga through tricky scenes of sensuality and mental instability. The performances are brave and eyes-wide-open, finding the glue that holds the movie together when the script stumbles to take it all in.

Isaac makes some life-altering discoveries and Fiona is buried alive in her guilt for the final act of “Quid,” and while nothing ever jumps off the screen, the resolution for this odd character piece is comforting, perhaps even ultimately perfect. “Quid Pro Quo” seems better suited to the stage, where static theatricality might emphasize the horror within, but the film remains an engrossing offering of oddness, even when it treats insanity as the ultimate cootie. 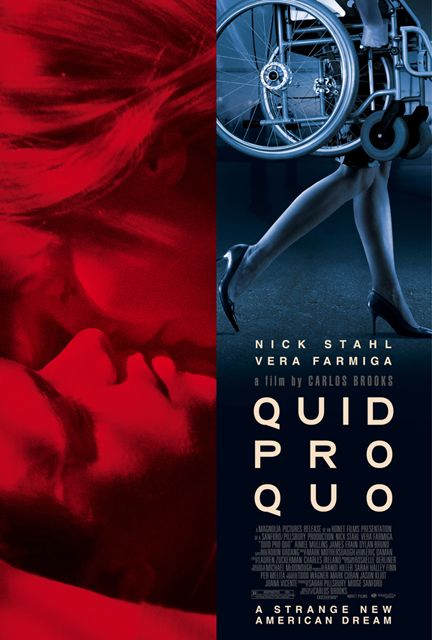