It’s easy to see that “Kit Kittredge” is after family audiences. It’s a harmless tale told without a lick of objectionable content, sure to offer relief to many parents unwilling to subject their children to the heated warfare of lowbrow summer entertainment. However, as generous in spirit as “Kittredge” is, it’s an absolute chore to sit through for anyone not plugged into the “American Girl” franchise hoedown.

Watching her family hope to make ends meet during the Great Depression, Kit Kittredge (Abigail Breslin) remains courageous, even trying to score work with the local paper writing about matters of the unemployed. When her father (Chris O’Donnell) heads out of state to find work, it forces Kit’s mother (Julia Ormond) to take in eccentric boarders (including Stanley Tucci, Joan Cusack, and Jane Krakowski), most of which have great distaste for the hobos that fill the manual labor jobs of the neighborhood. One of the homeless kids, teenager Will (Max Theroit), is a friend of the Kittredges, and when he’s accused of theft, Kit springs into action, trying to uncover the clues that will clear Will’s name and save the family home from foreclosure.

“Kittredge” is born from the popular “American Girl” doll line, which gives young girls (and Marie Osmond types) a chance to experience life from a different era and perspective. It’s an interesting concept for a toy, and if there’s anything to outright praise about the “Kittredge” movie, it’s the obsession with Depression iconography. The picture is all soup lines, chicken-feed-bag dresses, and the use of “hobo” as the ultimate four-letter word (seriously, these characters wield the term like a switchblade).

Director Patricia Rozema embraces the era and manufactures an agreeable cardboard backdrop for Kit and her adventures, but she overdoses on the earnestness, turning Kit into a blinding beacon of one-dimensional goodwill and kid-sized worry. “Kittredge” has been drained of complexity to satisfy the wee ones in the audience, and I’m absolutely fine with that; what troubles me about the picture is its amplified presentation. The cast is all wildly gesticulating arms and heavily-pronounced melodrama, while the plot itself is pulled straight from a “Scooby-Doo” episode, with slapstick bad guys and cartoonishly greedy motivations. Rozema pitches everything to the rafters, turning the picture into a sugary, aggravating caper.

The perky pinch is also felt by Breslin, pushed here by Rozema to give an adult performance dancing across the emotional rainbow, but she’s too limited to have much effect. Breslin is entering the Dakota Fanning phase of her career: the place where studios lust after her name, thus pressuring the actress to take roles beyond her skill level. Breslin sells the earnestness of Kit, but not the gravity, and her performance is cringingly robotic as a result.

“Kit Kittredge” is hopelessly vanilla entertainment, and while it’s sure to please some matinee attendees, it’s going to feel like a demonic endurance ritual to the less inclined. 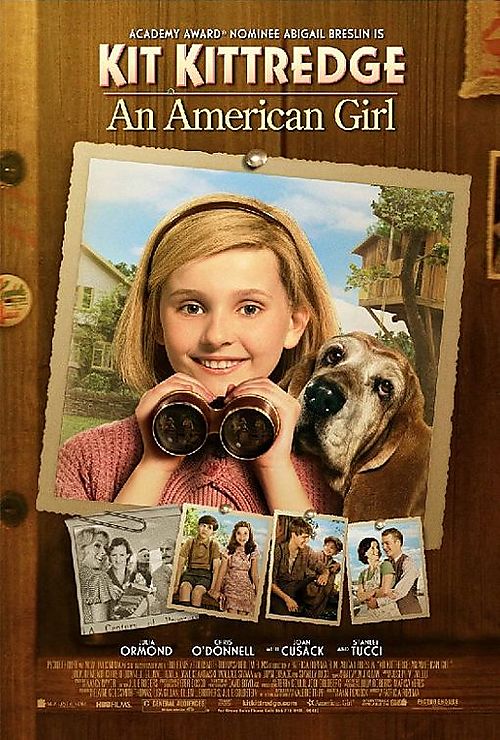 My 2 girls love the American Girls. The other American Girls movies were made for TV. They watched them and loved them. However, I will not be purchasing 9.00 tickets a piece for them to see this in the theaters, rather we will wait until it comes out on DVD. The price of gas,movie tickets and the costs for treats, is ridiculous, to pay for them to see it in theaters. For our family we will wait until this comes out in DVD format, and watch it from the comfort of our own living room.

The dude makes some good points. In addition to what he said, I had to explain to my kids that people who are able to pay their bills and buy groceries are not all evil, and that having a homeless camp established in your neighborhood is probably not a good thing. And in real life, monkeys are very, very evil.

Obviously, u are not liberal.

Blogs are good for every one where we get lots of information for any topics nice job keep it up !!!