“Finding Amanda” could easily be lumped into the growing “awful people doing awful things” genre. It’s a story of unlikeable characters forced into a position where they’re expected act honorably, yet can’t exactly temper their nature to destroy their own lives. Yes, it’s a comedy.

A struggling sitcom writer with enough vices to make Charles Bukowski blush, Taylor (Matthew Broderick) is facing the last days of his marriage to Lorraine (Maura Tierney) due to his compulsive gambling. To save face and regain trust, Taylor volunteers to travel to Las Vegas to help his niece Amanda (Brittany Snow) get out of prostitution and into rehab. Once there, Taylor finds the lure of gambling too much to ignore and immediately snowballs into old habits, while trying to convince Amanda that her life is a total wreck.

“Finding Amanda” marks the feature-film directorial debut of writer Peter Tolan, who has spent a majority of his career racking up some impressive comedy credits (“The Job,” “Rescue Me,” “The Larry Sanders Show”). His familiarity with uneasy laughs and edgy mannerisms comes into play in a major way during “Amanda,” a prickly comedy that takes meticulous care to arrange serious decision-making flaws for its characters.

It’s an uncomfortable film, as Taylor is a man bent on nurturing his addictions, even while it costs him his life. Yet “Finding Amanda” is uproarious too. Tolan snatches a few pages from the Larry David/Woody Allen neurotic files, but the tributes work, creating a sly collection of humiliations and snappy one-liners delivered with a renewed zeal from the recently sleepy Broderick. The picture is a caustic collection of exposed vices, yet Tolan can find the humor in nearly every diseased scene when he actually puts forth the effort.

Following Thomas on his trip to Vegas offers the screenplay plenty of moments of both panic and dry reaction, as the character falls victim to his impulses and remains wildly aware of the hypocrisy of his mission. Tolan is best with the minor moments of Taylor’s day: the interaction with a passive-aggressive casino manager (Steve Coogan), his reactions to Amanda’s rather competent assembly of a misled life, and the bitter losses racked up on the ponies. Between Broderick’s contained alarm and Tolan’s machine-gun quips, “Finding Amanda” can be a real knee-slapper, yet the filmmaker isn’t always concerned with the big laugh.

For reasons I’m having trouble processing, “Finding Amanda” turns abruptly serious. Not just melodramatic, but crying-in-a-bathroom-stall heavy, paying off some emotional connection between the characters that was never there to begin with. It’s disorienting to say the least, and really forces the film down to its knees in the final 20 minutes. More baffling is why it’s even there to begin with. “Finding Amanda” is a generously funny, sharp-edged comedy with unusual promise, and to watch it grow a conscience when clearly the film needed more generous helpings of acid is one of the year’s great mysteries. 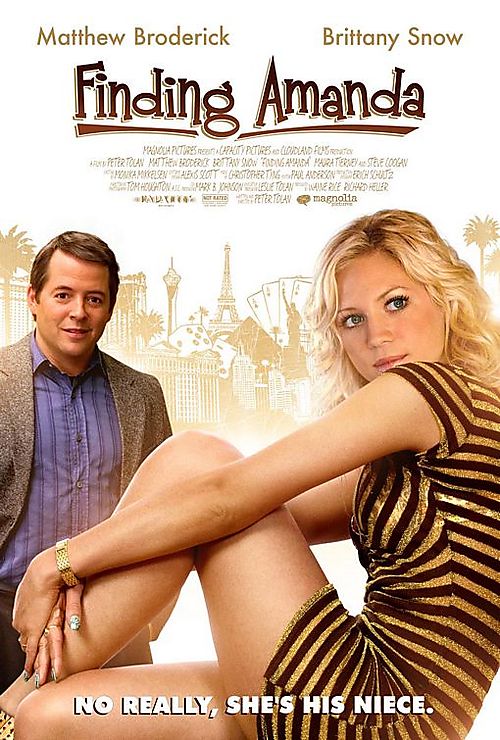