Someone somewhere had the nutty idea to connect the music from the 1940s to the music of the late 1970s, and explore that combustible relationship to fashion the ultimate disco movie of 1980. It was the year that gave us “Flash Gordon,” “Can’t Stop the Music,” and “The Apple,” yet “Xanadu” trumped them all with its pageantry of glitter, roller skating, and yearning to put on a show larger than life to kick off the new decade on a skyrocketing fantastical note of nylon-jumpsuited ecstasy.

A struggling artist wasting his talents painting record album art reprints, Sonny Malone (Michael Beck, “The Warriors”) can’t shake the image of a beautiful girl he ran into at the beach. Frustrated, Sonny confides in Danny McGuire (Gene Kelly, in his last big screen role), a lonely man warmed by his memories as a musician during the 1940s. The men strike up a friendship, soon joined by Kira (Olivia Newton-John), the lady of Sonny’s dreams, who uses her magical gifts to inspire the gentlemen to follow their dreams and open a nightclub. With opening night on the horizon, Sonny asks Kira to reveal her true self and embrace their love, but her otherworldly origins threaten to separate them for good.

A massive flop at the time of its release and generally considered the final nail in the roller-boogie coffin, “Xanadu” has endured throughout the years, recently reimagined as a Broadway musical, lending surprising new life to a bejeweled question mark of 1980. Strip away all the lousy press, scathing reviews, and cinema-snob titters, and what’s left is a relentlessly upbeat, fidgety experience that’s just dying to please the crowds. Look at “Xanadu” with an eye toward storytelling superiority and your head will explode. To appreciate the madness within, one must take in the blinding neon sights with an open heart and at least one nostril-coating line of cocaine.

Surely I hold no certainty that “Xanadu” was fueled by heaping spoonfuls of Bolivian marching powder, but I offer this evidence: it was 1980 and the picture is bonkers.

“Xanadu” is an experience unlike any other disco-influenced musical of the era. Given a hefty budget, cast with shining stars of old and new Hollywood, and created with a master plan to capture the leg-warmer zeitgeist, “Xanadu” was palm-sweaty ambitious and prepared to unload everything in its arsenal to bowl audiences over. It’s a smothering picture with a grand design the filmmakers aren’t exactly confident enough to pull off, but there are so many colorful distractions to adore in this misfit that help to counterbalance the often inexplicable presentation.

Director Robert Greenwald was in way over his head when he signed on to helm this overstuffed idea factory, and his skittishness is felt throughout the picture as the story constantly trips over itself, dipping toes in musical comedy and Greek origins to middling effect. “Xanadu” is best appreciated as a slide show of ornate costuming, outstanding soundtrack architecture, and scattershot dance choreography. It’s an episodic picture, but that very nervous quality works to the film’s advantage, dashing the plot from one musical number to the next, giving people what they really want: the show. The screenplay for “Xanadu” is only marginally adhered to and, for once, this is good thing. Will Sonny and Kira find love in the end? Who cares! Bring on more Electric Light Orchestra bliss and Gene Kelly dance sorcery.

“Xanadu” is all about the music, combining a wide variety of ballads, boppy big-band confections, and straight rock hits to shape something special, rivaling “Flash Gordon” as the preeminent screen musical experience of 1980. My preferred sonic harmony is found with E.L.O., who serve up major atmospheric tunes “Xanadu” would be lost without. Providing the wings to the film’s more lyrical detours (including a sugary Don Bluth-animated sequence), Jeff Lynne’s professional shame actually, in my eyes, remains one of his greatest triumphs. Cuts with Newton-John and the likes of The Tubes fill the softer edges nicely, but E.L.O. is the true diamond of “Xanadu,” imbuing the feature with sonic intensity and echoed spectacle.

Certainly “Xanadu” has its fair share of embarrassing, cover-your-face moments. There’s only so much one can blame on the fog of drugs before total incompetence rears its head. An imagined mash-up of big-band musicianship and disco rock textures between Sonny and Danny results in the film’s worst performance sequence: a den of spandexed, thrusting dancers dry-humping a league of cherry-lipped U.S.O. castaways, trying to assume the improbable position of a bridge across generations. It’s a doozy. I also wasn’t fond of Michael Beck’s sterile performance as Sonny. The actor looks lost in the middle of all the roller skating and sparkly daydreaming, and his stab at starry-eyed wonder is miles off target.

Granted, Beck should be allowed some room to fail simply because anyone caught between a golden, wet-lipped Olivia Newton-John (here thoroughly vaporizing her virginal allure) and a sprightly, smile-happy Gene Kelly is going to resemble wallpaper.

Presented in anamorphic widescreen (1.85:1 aspect ratio), “Xanadu” has been “digitally remastered,” just not entirely cleaned up. Surely the visual presentation is the best the picture has ever looked on a home entertainment format, with improved clarity making the colors pop and illuminating wonderful detail. However, the print remains a bit dirty, with specks littering the presentation. Much like Universal’s “Flash Gordon” disc from last year, the new image reveals various grainy cinematographic limitations, but overall this is a striking viewing experience.

The 5.1 Dolby Digital mix on “Xanadu,” also recently fluffed up for this DVD, is a barnstorming affair with magnificent sonic depth, liberal use of surround channels, and a near-perfect preservation of original audio intention. Clearly the songs offer the most bang for buck, and the mix respects the importance of keeping the music as vigorous as possible. Dialogue is agreeably separated. A French language track is also available.

“Going Back to ‘Xanadu’” (27:15) isn’t going to dazzle fans with loads of production information, but this mini-documentary remains an enlightening journey into the creation of a film most would rather forget ever existed. Interviewing a slew of production members and edited with an eye toward speed and slickness, the doc gets to the heart of the matter quickly: where did this wacky feature come from? The answers are often funny and the participants are fairly honest about their experience on the set.

The finest anecdotes emerge from choreographer Kenny Ortega, who was intimately involved with “Xanadu” at every step, eventually forming a lasting bond with Gene Kelly until his death in 1996.

Strangely, Olivia Newton-John is not present to discuss her iconic role, and the doc makes no mention of Michael Beck, who saw his rising bankability from “The Warriors” erased by this career misstep. Both have been vocal and pleasant toward the film in recent interviews, but they don’t appear here. A shame.

“‘Xanadu’ Photo Gallery” is a set of 46 stills from the film, including some publicity shots.

A Theatrical Trailer for “Xanadu” has been included on this DVD.

Offered on a second disc is the “Xanadu” original soundtrack. From the look and sound of the CD, it appears some effort has been made to spruce up the audio quality from its original issue, but the track listing remains woefully incomplete (still no “Drum Dreams” to be found). 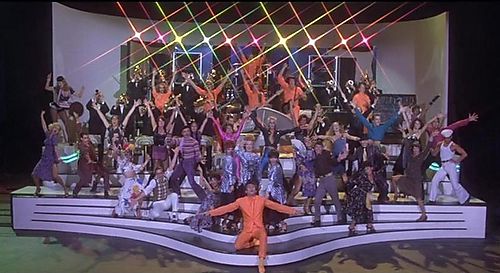 The famous finale of “Xanadu” places every glittering element of the film into a blender and pours out a paste of dancers, acrobats, skaters, cowgirl Newton-John, and a befuddled Michael Beck, concluding the movie on a celebratory laser-light-show note that pitches the whole feature over the edge of taste and personal roller-boogie digestive limitations. But damn, it’s a fun ride. Embrace it as a hilarious reminder of early-‘80s enthusiasm, explore the rampant homoerotic subtext, or just bask in the candied radiance of unimaginable show business aspiration, and “Xanadu” is an easy film to retain as a major guilty pleasure. 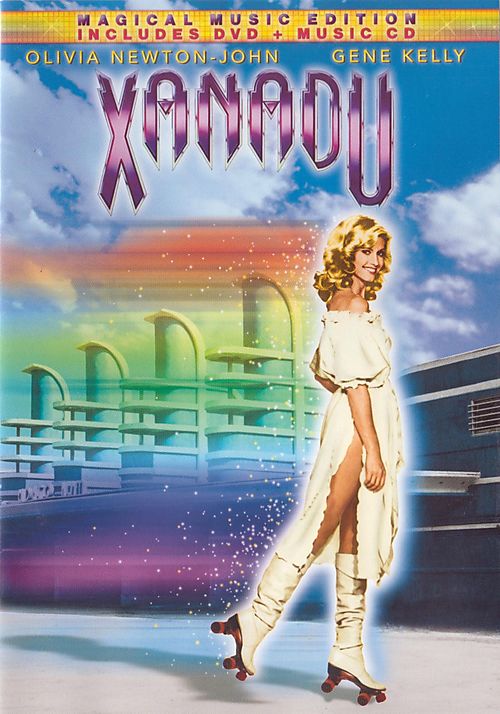 I'm actually sad to read that this movie was a flop and a career killer. It changed my life! I know it sounds stupid but I was 10 and the main gist of the movie was to follow your dreams and all that. As a ten year old I loved it! And ONJ on roller skates...that was heaven to me! I have a select few friends who feel the same. I guess that's why it's a cult classic.

Don't you folks believe it. This was a wonderfull movie. It needs to be appreciated for its time, not in todays absence of feelings. Going off to the theatre back then and watching the likes of something fantastical was realy great. Times were much harder than today and seeing something completely different opened our minds to what may be in our world. Too many care for the cold and calculating, others find wonder. I know which I choose. Industry or Art folks? From Olivia, to Gene Kelly, and the sounds of the Electric Light Orchestra, very nice indeed. They don't make them like they used to, sadly. Watch this movie!