Contractually dumped into a handful of movie theaters late last year without a wisp of promotion or pride, “Mama’s Boy” has finally arrived on DVD where it rightfully belongs. A witless, awkwardly constructed comedy, “Boy” bungles its comedic potential at every step, turning what should’ve been a jolly 90 minute diversion into a master class on miscasting.

A fragile boy raised to become a man of specific maternal needs, Jeffrey Mannus (Jon Heder) is now 29 years old and can’t move away from his mother, Jan (Diane Keaton, looking understandably confused). Ignoring his potential to instead stay protected under her wing, Jeffrey has grown into a bitter guy without much life experience. When Jan finds love with self-help guru Mert (Jeff Daniels), it drives Jeffrey crazy, leaving him desperate to break the two up. Jeffrey finds comfort in Nora (Anna Faris), a minimum-wage revolutionary who takes a shine to the loser, but finds his lack of ambition disturbing. Jeffrey now finds himself staring down a chance to finally find personal growth, caught between the life he’s comfortable with and the development of healthier emotional options.

Considering the film has just one good-sized laugh and a wonderful supporting cast, it’s safe to write that “Mama’s Boy” is not a complete trainwreck. In fact, the film almost appears designed to be terrible, as though it was a choice of director Tim Hamilton to bumble each and every scene in an effort to embarrass the kindly actors who elected to help make the picture. It’s a bizarre feeling, but it permeates the proceedings, turning the film into a complete dud, but a harmless one that perhaps never had a shot at reasonable quality.

There’s no mistake about it: the blame for this turkey rests squarely on the shoulders of Jon Heder and his continued effort to claim his crown as cinema’s worst comedic actor. Because some hipsters had extra time on their hands four summers ago and decided to make “Napoleon Dynamite” a pop culture speed bump, the rest of us have been forced to pay the price ever since, despondently watching the outrageously untalented Heder stumble his way through one unremarkable production after the other. Damn you useless ironic whimsy!

“Mama’s Boy” marks Heder’s first starring role since “Dynamite,” and he’s one terribly insufferable screen presence. With the film pressing down on him, Heder resorts to his Napoleonisms while making Jeffery a braying, femmy know-it-all. Without traditional actorly skills that could inject some charisma into the character, Jeffrey remains a boorish idiot with motivations that are impossible to decipher. The salt on the performance wound is Heder himself, who has zero comfort level in front of the camera and hits his punchlines with a bluntness that reads immediately as amateur hour. Exactly what about this guy people find funny I will never understand, and “Mama’s Boy” confirms that he’s completely incapable of producing laughs.

I can’t lay all the blame at Heder’s feet; Hamilton, in his feature-length directorial debut, is a woefully inept filmmaker, lazily trying to coast on cutesy montages and the magic screen band-aid of college radio hits. If there was any spitfire to Hank Nelkin’s original screenplay (unlikely, but let’s give the man the benefit of the doubt), it’s been steamrolled by Hamilton’s crude handling of the film’s comedy, and eventual belly flop into sentimentality, punctuated by a “Say Anything” lift both malicious and poorly foreshadowed. In fact, nothing in the film has any connective tissue to it. The picture is merely series of loose gags stumbling into each other while Heder makes faces, Hamilton spends more time on his soundtrack selections than his storytelling, as the rest of the cast waits patiently for their paychecks to clear.

Presented in anamorphic widescreen (1.85:1 aspect ratio), the “Mama’s Boy” visual experience retains an unusual amount of grain in the film’s early scenes, while struggling to preserve strong black levels. Colors are pronounced and fleshtones are accurate.

The 5.1 Dolby Digital mix kicks in with soundtrack selections, giving the audio effort a needed jolt with a smart collection of punk and new wave smashes. Dialogue is separated adequately.

English for the Hearing Impaired, Spanish, and French subtitles are included.

A feature-length audio commentary with director Tim Hamilton promises to dangle more toward technical disclosure, but he only vaguely holds to that vow. Hamilton reveals: how music was intended to underline Jeffery’s many moods; how he likes “to encourage a light feeling on the set;” the improvisations between Keaton and Daniels; character motifs; how “Withnail & I” and “Annie Hall” influenced the film; and his concerns about whether the film is “too dark.”

It’s not the most enlightening commentary, and should be enjoyed only by those enamored with the film.

“Deleted Scenes” (6:14) offer needed substance to the relationship between Jeffery and Mert, present a slightly more downbeat ending, and include a few comedic moments wisely edited out of the finished film.

A theatrical trailer has not been included on this DVD.

Who cares about these characters and their lethargic sitcom mentalities? Nobody, actually, with the exception of the filmmakers, who try to steer “Mama’s Boy” toward a heartfelt ending in the final reel. Heavens, there’s not even a word for how miscalculated a resolution the picture decides to chase. However, it fits in nicely with the rest of the nonsense, concluding a painful movie on an ultimately unforgivable note. 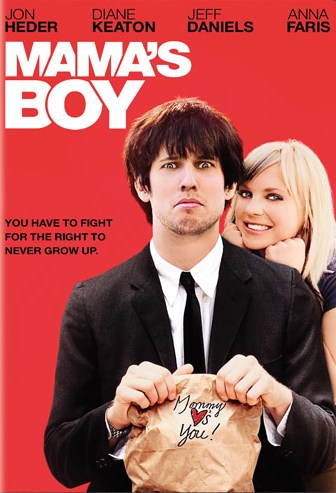