It certainly took the gang at Cinematic Titanic enough time to regroup, but the six-month wait between episodes was worth the unbearable impatience. Backing away after the release of “The Oozing Skull” to reassess their strengths and weaknesses, Titanic storms back with “Doomsday Machine,” and while the series is starting to solidify pleasingly, the movie selection for this outing is perhaps too formidable for even this squad of ace comedians to conquer with quips.

“Doomsday Machine” is a 1972 piece of drive-in fertilizer originally assembled in 1967 and abandoned, only to be revived five years later with a few additions of completely incomprehensible footage. It’s a sublimely awful piece of depressingly outdated ‘50’s sci-fi melodrama, dipped liberally in creaky cold war politics and unbelievable displays of chauvinism. While the title implies a nonstop, end-of-days battle for humanity, the film is essentially a plodding tale of horny astronauts unable to control their genital urges when Earth is decimated by the titular device. It’s more about abusing power than laser guns, thus making it an idea focal point for unrelenting mockery. Oh yeah, and Casey Kasem has a supporting role. Fantastic. 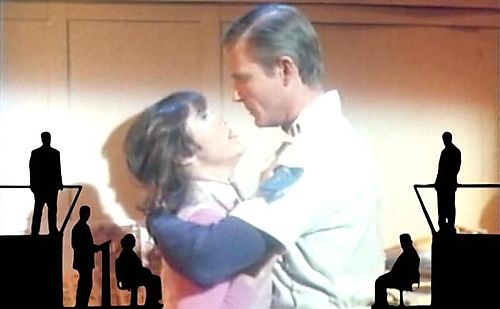 The Titanic gang (J. Elvis Weinstein, Frank Conniff, Mary Jo Pehl, Trace Beaulieu, and the riff majesty himself, Joel Hodgson) are eager to jump all over this mess of a movie, but some unexpected business is left to attend to at the start of the program. Perhaps hearing the cries of fans who desperately craved a background story to Titanic in the same fashion “Mystery Science Theater” tried to connect a loose plot to hang the hijinks on, the show explores the very reason the troupe has come together on this stage to riff mightily: the future. Details are sketchy, and perhaps personal interpretation is way off here, but it looks as though the Titanic episodes are being amassed as a gift to the horizon, with each effort packed into a “Time Tube” to await future enjoyment. It ain’t homemade robots and evil doctors in green jackets, but it’s a fascinating start, adding more edge to the project than “Oozing Skull” could communicate.

Once “Doomsday Machine” commences, the riffs flow easily and hilariously; the group has a blast pointing out severe wardrobe choices of the differing eras of production, while fruitlessly trying to keep up with the nonexistent continuity. Once the ’67 footage takes over, references to the likes of “Blue Velvet,” “Purple Rain,” and the wonderful cheapness of the entire production keeps the comedy continuous. The aforementioned sexism is another target Titanic toys with mercilessly, offering limitless chances to both underline and comedically deflate the film’s disturbingly ugly portrayal of male astronauts who thrive on humiliating their female counterparts and, at times, try on a little attempted rape for size. “Doomsday Machine” isn’t graphic, but it’s a sleazy film, leaving the knee-slapping Titanic comments a necessary blast of levity just to make it through this perplexing picture. There are some kinks left in Titanic to be worked out, including the usage of “pausing” the film to break up the riffing and add some skits. I love a Thunderdome reference as much as the next guy, but the stoppage only snaps the momentum and doesn’t elevate the comedy to higher levels. “Doomsday Machine” also shuts down in the third act, leaving the able cast a little disoriented on where to go next. And I mean literally shuts down, concluding on a bewildering, painfully arid note of contractual runtime padding that actually seems to freeze the troupe in their tracks. Conniff (who’s especially on fire here) even suggests the film is worst than “Manos,” perfectly describing the aggravatingly lifeless climax.

The full frame presentation mixes sharply outlined “Cinematic Titanic” props and set with the patchy, poorly-aged “Doomsday Machine” print. Much like “Oozing Skull,” this isn’t a reference-quality disc, but a fine offering of a modest comedy program.

Nothing to be found here, though a special note on packaging: there actually is some! While “Oozing Skull” was shipped to the faithful in a paper sleeve (only to be reissued with full packaging to the latecomers…grrrr), “Doomsday” comes fully prepared to join the rest of your collection on a display shelf. Hooray. 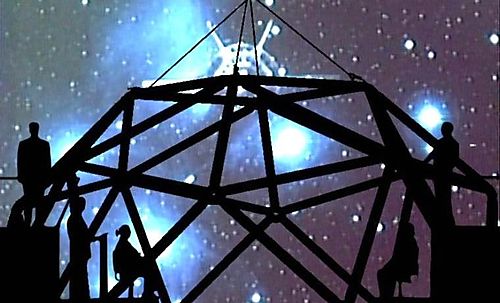 Cinematic Titanic continues to build impressively toward something yet undefined, and “Doomsday Machine” is an impressive chapter of growth. Much like “Oozing Skull,” this is an experience of sublime bad movie riffing from masters of the genre, and while their concept still needs a few tweaks and squirts from a creative oil can, the execution is uproarious and near-perfect. 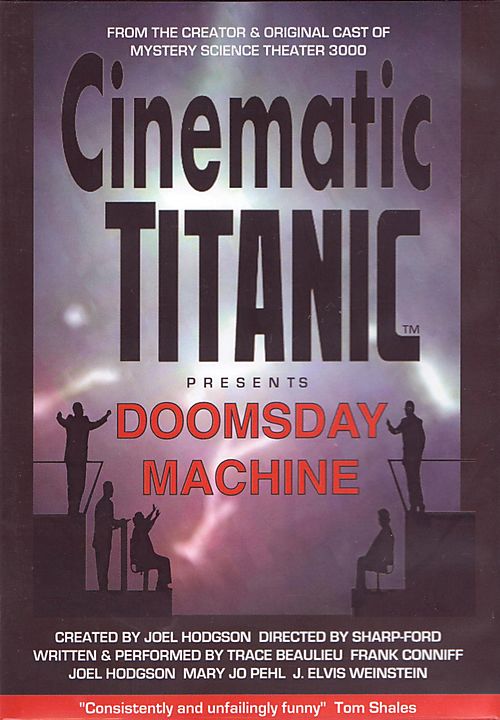 I actually saw this movie unriffed as part of one of those Mill Creek 20-movie packs (the reason I bought this CT DVD in the first place). Believe it! What I remember most was Katie and Mason being totally reprehensible characters and getting a sleazy feeling from watching them-uhg! By the time this turkey ended, I must've tuned everything out. Maybe that's why I don't remember the non-ending.