Film Review: What Happens in Vegas What happens in Vegas? Well, it usually involves a truckload of booze, which is something not readily available in a movie theater and would help this shrill monstrosity of a romantic comedy greatly. If I had anything kind to say about Ashton Kutcher and Cameron Diaz before this film, I’m ready to take every word back.

Traveling to Las Vegas after suffering some immense personal setbacks, Joy (Cameron Diaz) and Jack (Ashton Kutcher) find themselves thrust together by accident. Over drinks and a swinging night on the town, the two open up their hearts to each other, which leads to a quickie wedding. After deciding the next morning to erase their mistake, Jack hits a slot jackpot with Joy’s quarter, and both claim the grand prize. Sentenced by a judge to work out their differences over a six-month period of time, the two take the opportunity to declare war on each other, hoping to snatch all the loot for themselves.

“Vegas” is abrasive, needless, and unpleasant. Just like the real Las Vegas. It’s an old-fashioned star-driven comedy that is gliding on the charm of the two leads, yet there’s no story here, no recognizable emotions. The film is a crass collection of dreadful slapstick, deafening performances, and a romance that, even by loose screen standards, makes no sense whatsoever. “Vegas” is junk food: you’ll forget it the minute you step out of the theater. Perhaps even earlier than that.

Because so much of the film is carried on the backs of Kutcher and Diaz, one would think director Tom Vaughan would take better care to protect the characters from becoming completely toxic; instead, Joy and Jack are insufferable morons and it’s a chore to watch Diaz and Kutcher attempt to cozy up to these hostile roles. Mostly, the actors yell and fall, and then yell some more, all because some Hollywood boob told Kutcher a long time ago that screaming is hilarious. The two bop all over the frame, frantic to sell the anguish of forced marital bonding, while pushing ahead with eye-rolling pranks (most concerning the toilet) and sitcom coincidences. Vaughan is hopeless here, and he does nothing to temper the ear-splitting performances. With Kutcher hamming it up and Diaz in full pinched-face mode, there isn’t a single thing to embrace here. Perhaps this is why the leads are frequently shedding their clothes.

There are two capable people in the background much more interesting; comedian Zach Galifianakis and actress Lake Bell hold up the best friend delegation (along with Rob Corddry) and are severely underutilized in the final product. Both actors are far more entertaining than Kutcher and Diaz, and would provide a more motivating, combustible relationship for the director to work with. But then again, you’d probably pass on seeing them without clothes. Well, maybe just Galifianakis.

Because the screenplay by the execrable Dana Fox (“The Wedding Date”) is not in the mood to sample anything new, “Vegas” runs on autopilot in the final act, where…get this: Joy and Jack actually develop feelings for each other! As a boldfaced cliché, it’s deplorable, yet I was sucked into this segment of the film if only because “Vegas” finally gets quiet. The performances are suddenly dialed way down, and the burden of laughs is thrust upon the supporting cast. Hey, when a film is this obnoxious, I’ll take all the silence I can get. 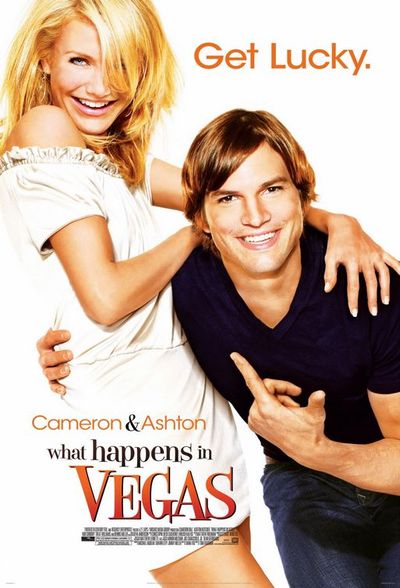