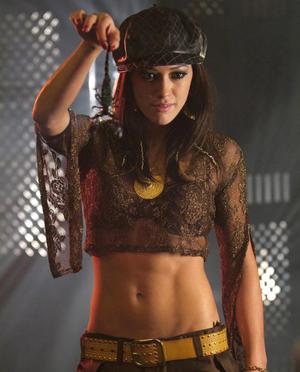 “War, Inc.” aims to be a sly “Dr. Strangelove” for today’s disgruntled generation, who slowly simmer in the misfortune of the Iraq war. The film just isn’t that razor sharp, but look at “War, Inc” as a back-flipping, over-the-top political farce, and the results are far more pleasurable. Consider the film an unofficial sequel to the 1997 classic “Grosse Pointe Blank,” and “War, Inc.” is absolutely wonderful.

Disgruntled hitman Hauser (John Cusack) is at the end of his rope, needing to down shots of hot sauce just to feel anything in his life. Commissioned by the Vice President (Dan Aykroyd) to travel to the war-torn Middle Eastern country of Turaqistan to protect ruling corporation Tamerlane’s financial interests, Hauser’s job is to kill competing CEO Omar Sharif while remaining under the guise of a trade show producer. With his trusted secretary (Joan Cusack) in tow, Hauser settles into the unfortunate responsibility of controlling the local insanity. However, once he meets aggressive journalist Natalie (Marisa Tomei) and Eastern European teen pop sensation Yonica Babyyeah (Hilary Duff), Hauser finds his allegiances altered while Turaqistan explodes around him.

I didn’t laugh much while watching “War,” but I found myself tickled with the tone that Cusack (who co-wrote the script) and director Joshua Seftel were trying to achieve. “War” is a constant burst of chaos, taking aim at political and cultural targets of all shapes and sizes. It’s a ballsy, abrasive farce that will surely have most audience members sprinting for the exit. Yet I fell in love with its symphony of outrage, slapstick, and ultraviolence.

The tough question to answer is how to exactly approach the material. “War” is critical of current shady American business methods and Bush-age Middle-Eastern maneuvering, but it’s blasted onto the screen with a heavy satirical bent. These are acidic brush strokes, but “War” is amazingly light on its toes, packing in heated depictions of corruption and corporate manipulation while saving plenty of room for much broader spit-takes. With Golden Palace-sponsored military vehicles, a legless chorus line show, Yonica fellating a gas pump while singing “I Want to Blow You…Up,” fast food chicken shops dominating the town square, and a motion-simulator ride where writers can experience the horrors of embedded journalism, “War” isn’t exactly a finely-tuned Michael Moore slash job; it has much more fun tinkering with established combat zone iconography and media-fed hooey. Or, if you’re like me, you could drink in “War” as the sequel to “Blank” Cusack criminally never received the chance to make. Oh, the similarities are all over this production, and it doesn’t take a genius to discern that Cusack just shifted a few key elements around to avoid a Disney lawsuit. Basically, it’s “Martin Blank Goes to War,” with Cusack returning to the character’s anxiety-riddled kitten purr voice, the blend of comedy and graphic violence, Joan Cusack hamming it up again as Hauser’s assistant, and the film’s dramatic arc of the lonely assassin rethinking his life’s purpose. In any incarnation, it’s great to see this persona back on the screen, and there’s always a special thrill that comes from watching Cusack assume a more haggard Steven Seagal stance as Hauser/Blank starts to mow down the bad guys when backed into a corner.

“War” gets a little sticky trying to tie together all the madness in the final reel, detailing Yonica’s wedding-day disasters, Hauser trying to rescue Natalie from extremists, and revealing the villainous Walker (Ben Kingsley, in full Looney Tunes mode) as the “viceroy” of the city. Seftel tries to even things out with some spaghetti-western guitar strumming to boost the cartoon nature of it all, but even with all the previous high-wire theatrics, it can reach frustrating levels of ambition.

While not for everyone’s taste, I was thoroughly amused by “War, Inc.” and its enthusiastic hustle to make a point. It’s not a perfect poke at today’s headlines, but it’s a pleasingly mischievous creation that trades stomach-churning hopelessness for an acerbic take on current and future woes. 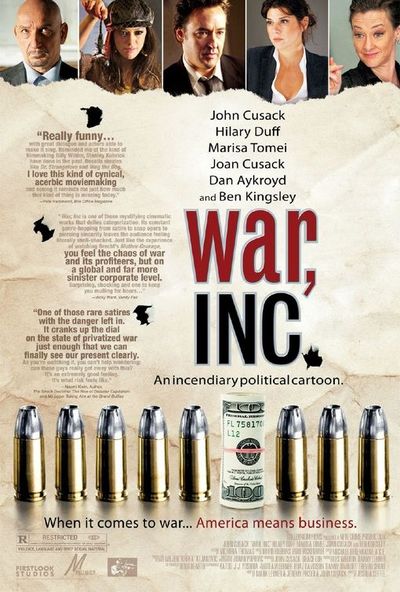