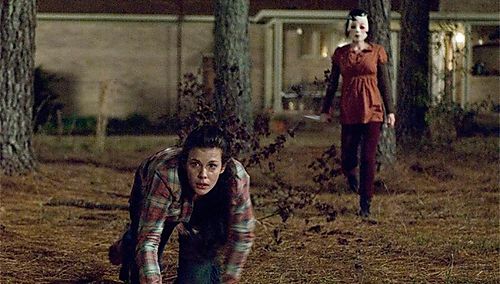 “The Strangers” answers the question: could a movie be made where nothing actually happens? A breathtakingly boring motion picture, “Strangers” proves a filmmaker needs more than spooky masked killers and brain-dead protagonists to craft a successful suspense offering.

Returning home late one night after some painful relationship matters are revealed at a wedding, Kristen (Liv Tyler) and James (Scott Speedman) quietly go about their business as emotional ice forms between them. When three masked strangers arrive at the home, they begin to psychologically terrorize the couple, who search for areas to hide from the torment. When the acts soon become violent, Kristen and James find there’s no escape from these faceless aggressors and fear what anguish the morning will bring.

“Strangers” is 80 minutes of screen stillness; a suspense picture powered by directorial incompetence and behavioral idiocy. Filmmaker Bryan Bertino seems determined to evoke John Carpenter’s “Halloween” with this riff on a Mansonesque home invasion, and he hands himself some powerful visual tools by placing unsettling masks on the killers and playing with shadowy composition. However, these are only fragments of “Strangers,” with the rest of the picture lost to pure absurdity.

Even for a pseudo-horror film, “Strangers” has little regard for logic. I can swallow massive acts of stupidity as long as the nonsense is pulled off with some juicy confidence. “Strangers” lacks a crucial genre grace, asking the audience to sit through 80 minutes of two actors frantic to make a lousy script feel realistic. Kristen and James don’t appear to truly panic, call the cops, or run like hell out of the house and never look back. No, they would rather spend time staring into the darkness with evil around every corner, reenter previously established hives of doom like total boobs, and bumble every chance for survival by simply allowing the villains free reign around their wide open property. Bertino doesn’t possess the skill to fashion a suffocating bubble of tension that would magically erase this buffet of pure illogic, which makes “Strangers” a maddening movie to consume.

“Strangers” is meant to toy with the audience, baiting them with continuous scenes of glacial stalking and Liv Tyler bursting into quivering hysterics. The picture is mean and violent, but it’s oddly harmless; a sensation crystallized by Bertino’s annoying employment of jump scares and deafening sound effects. The filmmaker routinely picks insulting, tiresome genre mechanics over anything remotely creative, blowing through any hint of suspense in the first five minutes of the movie. The rest of the picture falls asleep, failing to stir up any excitement or sympathy for these one-note victim puppets and their pea-brained ideas for survival.

I suppose what’s most insulting about this wretched picture isn’t the overall repetition (masked killer enters room, Tyler cries: lather, rinse, repeat), the awe-inspiring creative bankruptcy, or the “shocker” ending that screams absolute filmmaking desperation; the real crime committed here is how Bertino wants the audience to buy this tale as fact, opening the movie with a short title crawl explaining the “history” of the crime we’re about to witness. Reality? Really? In the same film where every horror cliché is present and accounted for? I think a devastating, real-world crime spree deserves more respect than this pile of tasteless genre garbage is capable of producing. 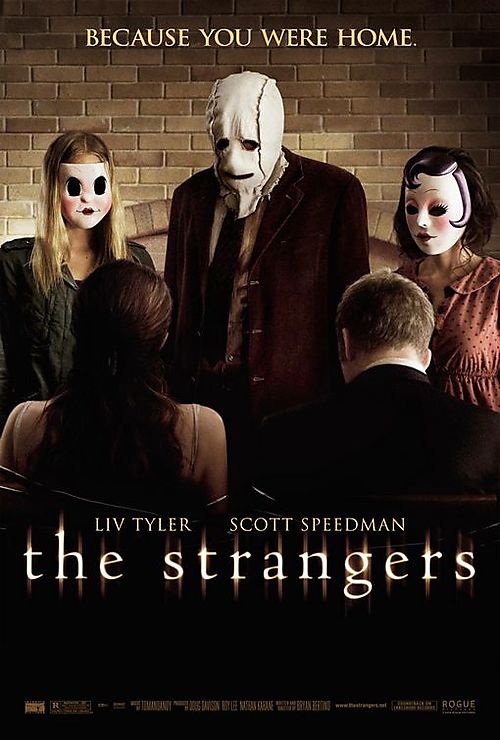 Well, at the sold out show where I saw it the audience was shrieking pretty loud. I wouldn't say it's the scariest movie I've ever seen, but the director has certainly got game.

Brian, you couldn't be more right about this movie. Just a bunch of cheap scares and lazy writing.

I agree 100%. I was pissed off the entire movie b/c neither of them had a backbone to just say "the hell with it" and fight. I would rather have watched an old Friday the 13th flick instead of wasting 15 bucks.

I saw it and liked it a lot. Yes, it uses traditional suspense movie mechanisms to create a feeling of dread and fear, but so what - it IS a suspense movie!
As for "Kristen and James don’t appear to truly panic, call the cops, or run like hell out of the house and never look back."... you obviously didn't pay attention to the movie. Kristen and James both panicked, they both tried to call the cops, and they both tried to run like hell out of the house. They failed, because of the killers. But you would have seen that if you paid attention.

I saw it and liked it a lot. Yes, it uses traditional suspense movie mechanisms to create a feeling of dread and fear, but so what - it IS a suspense movie!
As for "Kristen and James don’t appear to truly panic, call the cops, or run like hell out of the house and never look back."... you obviously didn't pay attention to the movie. Kristen and James both panicked, they both tried to call the cops, and they both tried to run like hell out of the house. They failed, because of the killers. But you would have seen that if you paid attention.

I laughed at your summary paragraph, because that's exactly what I was thinking when it ended. Nothing happened!

I actually thought that the way Liv Tyler and the guy reacted was pretty realistic, or at the very least more realistic than in most horror movies. Despite the fact that the movie was nothing but cheap scares (silence interrupted by loud noises), I didn't end up hating it like as you did. Still, it's disappointing that the movie is basically the first 30 minutes of a normal horror film dragged out to an hour and 30 minutes.

The more I think about it, the more I realize that you're probably right and the movie sucked. But, for whatever reason, I still enjoyed it.

A movie made by idiots for idiots.

People slamming on the house? Stare, don't call for help (the phone lines were cut long after the "strangers" announced themselves)

Nobody just runs into the woods and DOESN'T STOP RUNNING? Hogwash. Car on fire, house invaded...you'd run like you had slave feet.

Oh, the holes in this film are amazing.

Nice review. It's a piece of shit.

THIS IS THE WORST MOVIE OF ALL TIME!!!
It would be impossible to make a movie worse, this movie makes Manos Hand of Fate look like Citizen Kane. If you like this movie you are WORTHLESS to mankind﻿ and you must terminate your life immediately. I can't recall a movie so mind-numbingly STUPID, so fucking awful, in all of my life. This movie has NO PLOT, HORRIBLE ACTING. How bad is it? The Director (lol) likes quivering branches and empty driveways. Those responsible for this atrocity deserve death!