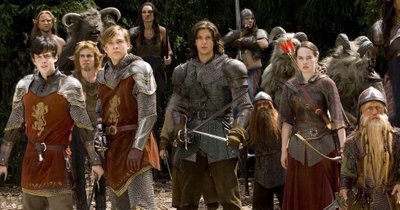 I felt indifference to 2005’s “The Lion, the Witch, and the Wardrobe,” and I feel indifference to its sequel, “Prince Caspian.” There’s something missing from this franchise, and three years ago the absence of persuasive content was baffling. Now, the clues are more apparent.

When a magical train station whisks siblings Peter (William Moseley), Susan (Anna Popplewell), Edmund (Skandar Keynes), and Lucy Pevensie (Georgie Henley) back to the realm of Narnia, they learn that while one year has passed for them since their last visit, hundreds have gone by in Narnia, and the land is in ruin. Overrun by humans led by villainous King Miraz (Sergio Castellitto), it’s up to Prince Caspian (Ben Barnes) to escape the clutches of Miraz and seek counsel with the creatures and leaders that remain in Narnia. Teaming up with the Prince, Peter and the clan decide to fight Miraz for control of the land, while Lucy searches anxiously for signs of the all-powerful lion Aslan (voiced by Liam Neeson).

I’m aware that stepping on the literary throat of C.S. Lewis is sure to provoke a rabid response, but understand that my beef is not with the source material, but with the director of the two “Narnia” films, Andrew Adamson. While surely putting forth a herculean effort to lift these massive fantasy features off the ground, Adamson has a horrible grasp on the drama and performances. Surely “Wardrobe” could coast on the very newness of it all, but “Caspian” is a visual sleeper hold from frame one; a constipated effort to erect widescreen wonderment, yet the production is missing dimension and needed narrative gusto.

“Caspian” handles oddly from the opening sequence, which introduces us to the new “Narnia” look: muddy, low-lit cinematography, which lends the picture a brooding stance, making an already overlong picture feel eternal. While the story might come easy to Lewis devotees, as a film “Caspian” has substantial difficultly arranging itself into a kinetic whole. It takes a good 30 minutes for the film to warm up properly, only to find that Adamson has little interest in his characters, giving mere seconds to important motivations and sweeping Shakespearean dramatic turns that seem critical to the experience.

“Caspian” doesn’t feel rushed, just unfinished. Adamson’s focus is on the eye-opening, big-bang material, in which Caspian and Peter try to lead Narnia forces of dwarves (played by Peter Dinklage and Warwick Davis), centaurs, and sword-wielding CG mice into battle against Miraz. That’s all well and good, but where’s the meat here? Where’s the connective tissue that the audience can savor while our heroes step into battle? “Caspian” is marked by long stretches of screentime where there’s nothing dramatic to grab onto, as though the film was engaged in a dullsville holding pattern while waiting for the next opportunity to declare war. Once it becomes clear that Adamson isn’t interested in establishing a human element, the picture becomes a chore to sit through.

The performances don’t exactly help matters either, with the Pevensie clan of young actors showing a noticeable lack of panache with these more difficult roles. Truthfully, the kids are completely ineffective, and it cripples “Caspian,” which details the once and future kings and queens of Narnia as troubled souls, yet nothing registers in their body language, nostril flaring, or distant stares. I also wasn’t thrilled with Barnes as the titular royal heir. It’s difficult to get excited about a hero who looks exactly like and seems about as threatening as a Jonas Brother.

“Caspian” is quick to head into battle, and the final hour of the movie is devoted almost entirely to expansive combat arrangements and a marathon one-on-one duel between Peter and Miraz. Admittedly, I was more swayed by this section of the film due to its thankful influx of velocity, but Adamson is hardly serving up anything new here. It’s the same war cries and catapult assaults as detailed in such hits as “Lord of the Rings,” without anything to single them out for “Caspian.” It all speaks to the fatigue of the production’s imagination, and while it may entertain the faithful, I doubt it’ll inspire more than a drowsy “yip-ee-do” out of the casual viewer.

I suppose I was expecting the next chapter in the Pevensie family adventure story that was promised at the end of “Wardrobe.” What “Caspian” ends up becoming is a simpleminded, violent war picture (the film’s PG rating is misleading) with minimal effort put into character growth. It’s a decent ride for special effects and all things that go boom, but anyone expecting depth here might be better off snuggling up with the original books instead. 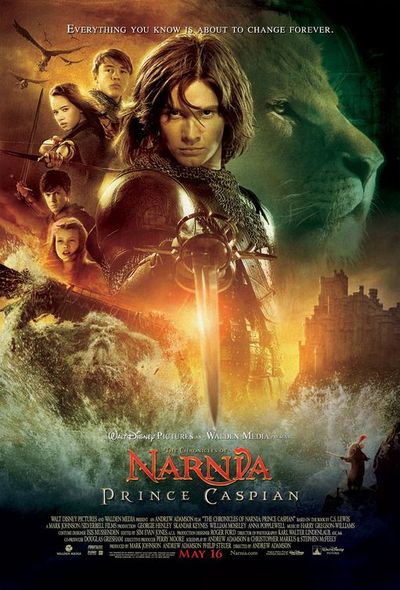