Comedian Doug Benson (perhaps best known for his commentary on VH1’s “Best Week Ever”) watched Morgan Spurlock’s “Super Size Me” and had an incredible idea of his own: instead of ingesting fast food for 30 days, he would smoke weed nonstop for a month, as a way to gauge his dependence on marijuana, along with various other scientific and medical responses. Never one to say no to an endless parade of drugs, Benson embarked on the biggest challenge of his life.

As it turns out, part of that challenge was actually to avoid marijuana first for 30 days in a detoxification process that would allow Benson to enjoy more direct results of his eventual pot excess. For a fellow who has made a name for himself as a stoner comedian (he’s the creator of “The Marijuana-Logues”), taking pot away from Benson is like snatching a teddy bear out of a child’s grasp.

So what exactly is “Super High Me?” Well, it’s not really anything substantial, perhaps as a comment on the title, but more likely the result of the scattershot approach taken by director Michael Blieden, who establishes several purposes for this documentary. First and foremost, “Super” is the Doug Benson show, as the comic travels around the world performing in clubs and learning all he can about pot culture in America. He’s a funny guy, heartily working his laidback wit and weed-centric material to great effect, cracking up the crowds and endearing himself to the stoner underground.

The rest of “Super” is a political mishmash of concerns, centered on Proposition 215 in California, which basically makes marijuana legal in the state, yet illegal to federal forces. It’s a pinch that drives California pot-enthusiasts crazy, making a mess of legalities and basic American freedoms. How Benson fits into the argument is left to the imagination, since his purpose in the film is to get high as a kite and travel. The more substantial questions of justice are compelling (if simplistic), but poorly integrated into the flow of the feature by Blieden, who spends a good lump of screen time covering the fight between a “rogue” North Hollywood cop and marijuana dispensary establishments, who are caught in a legal vortex they can’t escape from due to the perplexing laws of California.

“Super” is much more assured clinging to Benson and shadowing his odyssey into the heavily-smoked unknown. Observing Benson without weed is a riot and actually reveals how much his personality is purified without an outside substance; Benson doesn’t feel much has changed without pot, but the cameras expose the comic in a more direct state of mind, which slightly modifies his act from weed jokes to “ain’t got weed” jokes. We also see Benson engaging in memory and psychic tests, taking the SAT, chatting with a psychologist, and even agreeing to check his sperm count to compare his stats a month later.

Once the pot experiment commences, “Super” sort of floats around from that point, catching Benson marveling over the myriad of ways the dispensaries can keep their clients high (with lip balms, lotions, and sprays), and gauging the reaction of his comedian friends (including Patton Oswalt, Jeff Ross, and Sarah Silverman, who helps Benson out by sharing a bong) to his heavy-lidded adventure. Benson soon hits the road to Minneapolis to meet with medical marijuana activists, heads to Canada to visit with Marc “Prince of Pot” Emery, takes in mass at the Temple 420, and makes a pilgrimage to the Mothership dispensary in San Francisco to greet the minds who started up Prop 215.

30 days of constant weed inhalation and digestion leaves Benson in a quite a smiley fog. It’s not clear whether or not the test proves anything to the comic (the final medical results are open to interpretation), but it sure makes him happy. Blieden squeezes the film tight in the final reel to excavate some profundity out of this material, but this is hardly a radical production of thought-provoking ideas. “Super High Me” is a goof, and only finds a sympathetic pulse when allowing Benson to stumble around, determining his own limitations and uncovering the amazing range of pot traditions. Anything beyond that tears the paper-thin entertainment value of the documentary in half. 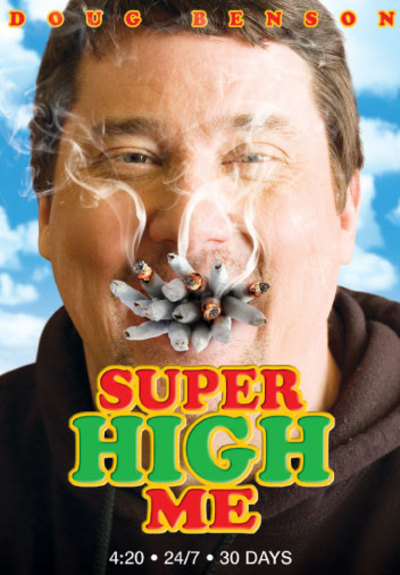