The Wachowski Brothers have proven their skill with visual gymnastics and their affinity for high-octane action, but an ability to assemble a suitable family film will most likely always elude them. “Speed Racer” is an ocular slap, but it’s strictly empty calories; a joyless, over-plotted nostalgia machine that barely limps out of the starting gate.

Ever since he was a child, Speed Racer (Emile Hirsch) has always wanted to join the family business and become a car-racing competitor. When the death of elder brother Rex pushes Speed into the driver’s seat, he shows amazing ability on the track, making his family proud. When the ruthless owner of Royalton Industries (Roger Allam) makes Speed an offer to join his aggressive driving squad, Speed refuses, putting him in the crosshairs of corporate thugs. With the help of the mysterious Racer X (Matthew Fox), Speed partakes in several hazardous contests, hoping with each opportunity to further understand his brother’s legacy and show up those who question his talents and threaten the livelihood of his family.

A live-action aping of the cult 1960’s Japanese anime television series, “Speed Racer” has been exhaustively expanded to fit big-screen needs. Written and directed by Larry and Andy Wachowski (their first since sealing off “The Matrix” with a double helping of provocative sequels in 2003), the brothers literally lunge into a kaleidoscopic realm of colors and cuts with this picture, taking the audience into the tight folds of animation and sensory overload. It’s meant for families, but “Speed” will surely beguile stoners for years to come.

“Speed” is an intricately constructed movie, with every blinding detail imaginable up on the screen. Blanketed by CGI, the film’s color scheme resembles a tipped bowl of Skittles, with all sorts of garish colors fighting for camera time. This blizzard of hues and extensive green-screen work acts to construct the cartoon world for Speed (think “Spy Kids” mixed with “Dick Tracy”) as he puts the pedal-to-the-metal and zooms across twisted tracks of certain doom; not unlike a potent Hot Wheels fever dream. The Wachowskis don’t just want Speed to speed, they turn the race sequences into acts of “Car-fu,” as the vehicles cartwheel, flip, and battle each other for the lead, similar to the pod racing sequences from “Phantom Menace,” only with a more pronounced cartoon glaze, if that’s even possible.

The race sequences are the highlights of “Speed,” if only because the directors possess a radiant gift for kinetic energy. Speed skidding around day-glo roads is the ideal venue for the Wachowskis to flame on their imaginations and smear the screen with a gloss of eye-crossing car choreography and distinct inspiration reference points, presented by two minds clearly in love with the source material.

However, that blinding devotion to “Speed Racer” is tricky to sort out, and the screenplay is a numbing jumble of allegiances and poor characterizations. In short: the film is a bore. The swirling opening titles and tease of the famous “Speed Racer” theme are quickly replaced by stifling racing legacy overtones, a horde of ill-defined villains, corporate financial jockeying (because nothing says “summer entertainment” quite like stock price bargaining), and uninteresting Racer family dynamics.

Not a typo here: the film runs 130 minutes, which is about 50 minutes too long for bubbly fun like this, but the Wachowskis are unwilling to scrape out any of the fat, and it hurts the film. What should’ve been Speed in danger, the question mark of Racer X, and heaps of flamboyant car racing is turned into an obese, exposition-heavy creation that fatigues easily. There’s no emotional pull to any of it, and it puts Speed into the focal backseat for most of the feature.

Again, stock prices. There’s this ungodly-looking world of towering loops and impossible jumps ready to smack the audience in the face, and there’s a sequence where the bad guys hammer out the details of stock prices.

In retrospect, perhaps it’s best that Speed isn’t handed prime screen real estate, since Hirsch’s performance barely shifts out of neutral. He’s a cardboard standee here, physically embodying cartoon Speed nicely, but lacking any charisma to properly 3-D the icon. Better is John Goodman as Speed’s father Pops, Korean star Rain as Speed’s dubious ally, and Fox, who grits his teeth pleasingly as Racer X (not to mention pulling off the film’s most absurd costume with panache). Unfortunately, the film’s feminine contingent, Susan Sarandon (as Speed’s mom) and Christina Ricci (Speed’s love Trixie), are shuffled off to the corners of the movie in a hurry, and the absence is felt.

To counteract the thundering wall of artifice and adult-themed intrigue, the Wachowskis have activated the characters of Spritle (Speed’s kid brother) and chimpanzee sidekick Chim-Chim to speak directly to the children in the audience (often literally). Practically existing in their own separate movie, the mischievous duo provides ear-piercing slapstick and broad comedic displays to the film, and every moment with these two clowns is catastrophic. Granted, the filmmakers have zero experience in family entertainment, but that doesn’t excuse the aggressive pinch of these scenes or the eventual use of fecal matter and groin-hit sound stingers to get a laugh. Even worse, the Wachowskis direct young Paulie Litt to assume the cocktail-hour stance of an obnoxious borscht-belt comedian for Spritle, turning his every eye-bulging, neck-craning move into pure torture. 10 minutes in, I wanted Speed to run over the character with the Mach 5.

“Speed Racer” sure is pretty to look at, and the Wachowskis have accomplished amazing optical feats bringing the viewer into the living anime world of visual layering, spastic cutting, and bold coloring. However, the film is an inert sleeping pill; an anti-event movie that spends an inordinate amount of energy trying to drum up extremity, only to completely botch the results by permitting such cringing indulgence. 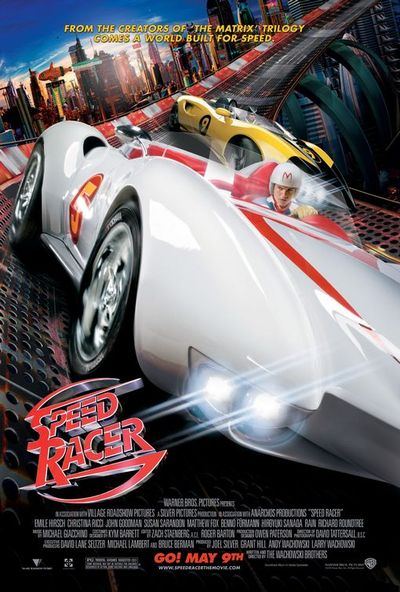 Where are the nerds trying to defend the movie?