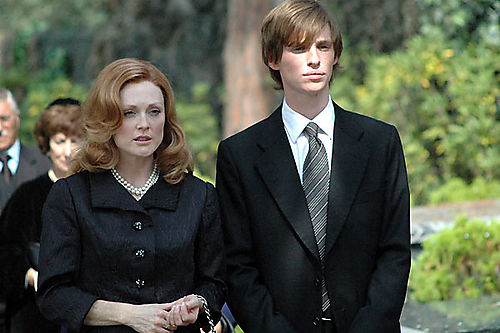 The murder of Barbara Daly Baekeland in 1972 revealed a sordid history behind the woman and the peculiar relationship she held with her son, Tony. “Savage Grace” is the juicy screen version of those events, and director Tom Kalin (“Swoon”) treats the nightmare with a perfect pitch of melodrama and hysterics, easing into the discomfort of obscene sexual violation.

A former actress turned desperate socialite, Barbara Daly Baekeland (Julianne Moore) attempts to cover her lack of self-esteem by aggressively doting on her son, Tony (Eddie Redmayne), and trying to hold the attention of her cheating husband, Brooks (Stephen Dillane). With profound psychological problems, Barbara is lost when Brooks finally leaves her, turning her poisonous attention to Tony, who spends any rare time away from his mother exploring his homosexuality. As the years go by, Tony becomes hopelessly bound to Barbara, who’s struggling to find love any way she can, eventually turning her advances toward her own child.

It’s been 16 years since Kalin last made a feature-length motion picture, which is likely the reason why “Savage Grace” is a bumpy ride of execution. Underneath it all, the Baekeland case is a disturbing horror show, with cruel manipulation and abuses at every turn. Yet Kalin treats this predatory funhouse with a soothing screen detachment, exploring the psychological injustices and oddly alluring sensuality with careful attention to the small spaces of behavior.

When I write that the film is sensual, it’s not a comment on the actual incestuous actions taken by Barbara, but merely a response to Kalin’s screen touch. He takes the film to humid, sun-baked locations, and guides Moore to delightfully lustful ends as Barbara; physical allure being one of the few weapons the character has always held, while age slowly takes that away from her. Kalin stays attentive to discomforting seduction sequences and he toys with the audience by making reprehensible acts of intrusion almost desirable. But then again, few mothers wield scorching sexual influence quite like Julianne Moore. She’s perfect in this role, which plays to her cherry-lipped, champagne-glass cracking, smudged-mascara strengths.

“Savage Grace” exists in this fog of venomous Baekeland dynamics, which includes cruel screaming matches, suicide attempts, unsavory bedroom dysfunction, abandonment, betrayals, and eventually murder. Kalin is reverential to the proceedings, but he also dials up the soap opera hysterics whenever he can, backed by Fernando Velazquez’s luxurious, Hitchcockian score (the “Psycho” overtones are all over the film). Drag queens are going to adore this movie. The story takes huge time jumps and can’t always clearly articulate the supporting characters, but the mood, the virtual sweep of this odd picture is undeniably enticing and aesthetically rewarding.

“Savage Grace” is one of those divisive films in which a single wrong step could bring the whole enterprise crashing down, and the unappetizing Oedipal relationship at the core of this picture is perhaps more than the average audience member can handle. Certainly “Savage Grace” is a picture for the adventurous viewer, looking to be challenged and appalled at the same time. Now there’s a special feeling that’s too rare to pass up. 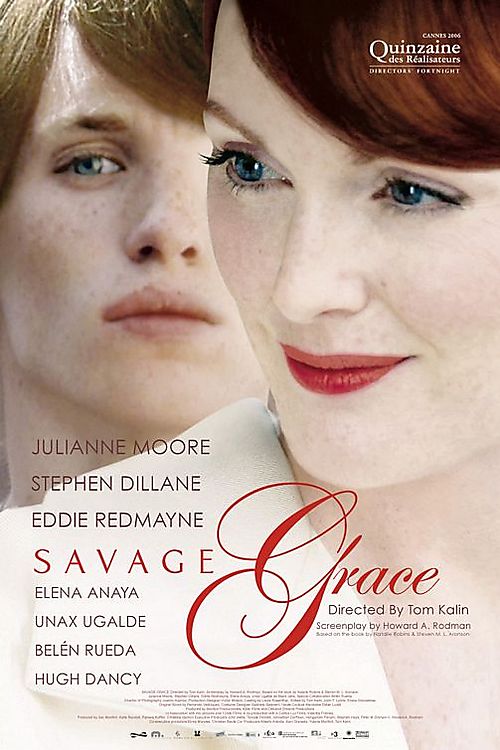