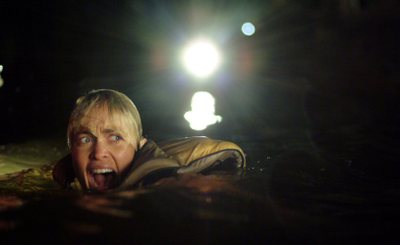 If we’re talking about killer crocodile cinema, especially offerings in recent years, then yes, “Rogue” is a delight. A film predicated on ideas of suspense and pace rather than blasting violence and idiocy, “Rogue” is a satisfying, skilled entry in the water-based terror genre. Perhaps this is the reason it’s being dumped into a small handful of theaters without a wisp of promotion.

On assignment writing for a travel magazine, Pete (Michael Vartan) heads to Northern Australia to take in a scenic river cruise tour, led by Captain Kate (Radha Mitchell). Piling into a boat with a group of tourists, Pete enjoys his day spotting crocs and swatting away flies, but when Kate spies a signal flare in the distance, she takes the boat out of routine and into the unknown. Once arrived at the point of distress, the group learns they’ve stumbled into the territory of an aggressive monster croc who quickly sinks the boat, leaving the panicky tourists to deal with a hungry predator and rising waters on an tiny island.

“Rogue” is blessedly simple horror entertainment, and is easy on the senses. While some might see that as potential nap time, I was impressed with the restraint writer/director Greg Mclean demonstrates here, especially after his last picture, “Wolf Creek.” An ungodly dull, mean-spirited throwaway torture film, “Creek” only proved Mclean was skilled at showcasing gorgeous Australian scenery, not piecing together a competent chiller. The “Wolf Creek” experience taught Mclean well, for “Rogue” is a stronger, more involving production, and it actually contains some fingernail-chewing suspense.

Last year, the hilariously marketed “Primeval” proved that simply having a rampaging monster croc on the loose doesn’t necessarily guarantee a rollicking good time. “Rogue” is a far more involving genre diversion, blending the claustrophobia of the Australian landscape with the B-movie thrills of a gigantic predator wiggling around, picking off helpless humans one by one. Mclean respects the limits of the concept, and while some abrupt editing examples suggest cleaved-away narrative complexities, the final product goes right to the point; it swiftly gets our heroes to the conflict and keeps the star of the show off camera as much as possible to better nurture the tension.

“Rogue” is essentially a series of panic set-pieces, as the group tries to outwit the croc and return to safety. It’s a film that takes its time, building the tension for more functional results. Mclean’s direction is confident and easily understood, and he manages to sneak in a nice aura of hopelessness as the fearful unit grows more desperate (and therefore more foolish) to escape the wrath of the croc. Mclean is also careful not to demonize the beast, maintaining the idea that the massive man-eater is merely protecting its domain and hoping for something to snack on.

Trying to find a finale suitable for a low-budget feature, Mclean wisely does away with dialogue and offers a near-silent conclusion where our hero falls right into harm’s way and spends an extended amount of time searching for an escape route. Again, the self-control is appreciated.

“Rogue” isn’t flashy, but it’s an agreeable creature feature. Mclean has clearly ingested buckets of “Jaws” pills to come up with scary movie that finally allows the audience to enjoy the ride, instead of being swiftly run over. 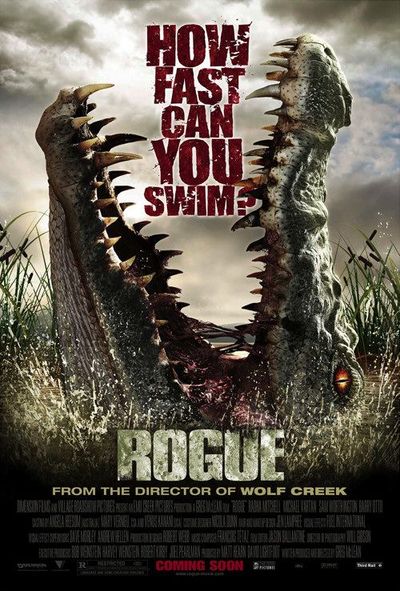 Hard to believe the powers-that-be dumped this smart thriller into theaters as if they were ashamed of the finished product. Where's the shame for shoving "Prom Night" down our throats?

A sorry statement about the horror genre circa 2008.