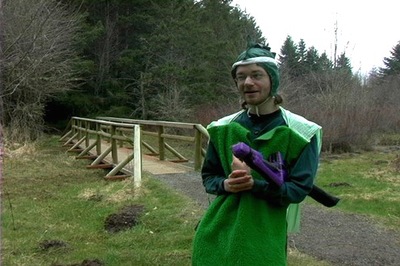 For some, fantasy is a place to go when the real world is too much to stomach. It’s a temporary portal to other worlds where identity can be rebuilt and victory is within reach. For others, fantasy is a requirement; a critical linchpin that removes real-world consequences and demands, and allows insular behavior to grow unchallenged by outsiders. There’s a home for these people, and it’s called LARP (live action role-playing).

“Monster Camp” is a documentary taking a look at the Seattle NERO (New England Role-Playing Organization) outfit and their struggle to put on a show during the cold winter months of 2006. For these individuals, NERO represents the great release of pent up frustrations, a chance to fly their geek flag proudly, and offers a few of the participants a comfortable place to meet like-minded souls who also enjoy dressing up in homemade costumes, strapping on a plastic sword, and slaughtering monsters, not with might, but with incredible math skills.

Ruled by NERO overlord Shane, “Camp” observes the elaborate preparation it takes to assemble an extended weekend of live-action Dungeons & Dragons. Fueled by two Denny’s breakfast plates, Shane embarks on this particular NERO weekend with a heavy heart, as he holds a secret he won’t share with the group or the camera until the last day. For him, NERO is a great outlet for all things nerdly, but it’s a tiring, thankless job that doesn’t allow for much sleep or satisfaction. For Shane, this NERO weekend could be his last.

So how’s this game played? The rule book is 200 pages long and requires a sizable cast of newcomers willing to play demons and assorted fantasy villain archetypes. Following a “plot,” the heroes and creatures scatter over a large park area and occasionally battle each other swinging foam weapons and flinging “spells” (birdseed wrapped in cloth). When face-painted enemies make contact during battle, they yell out their hits and mentally add up the damage points inflicted, leaving life or death in the hands of fair play. With a cast of gypsies, warlocks, lizards, evil plant life, and goblins, anything can happen during game play, and often does.

“Camp” is overwhelmingly sympathetic to NERO and the participants. Director Cullen Hoback doesn’t mock the players, allowing his camera to observe, placing the burden of judgment in the lap of the audience. It’s a confident directorial piece in what amounts to be a spellbinding documentary of unique perspective. Sure, I giggled when the more socially-awkward players trotted around their inner-dork, but “Camp” is far more compassionate and understanding than it initially looks, and I quickly grew invested in these strange souls as they battled dragons and their sense of self.

“World of Warcraft,” the sprawling online fantasy game, is the constant theme of obsession throughout “Camp.” Hoback returns to it time and again, singling it out as methadone for the players; the opportunity to continue living inside a dream world while NERO takes a break. There are no Leeroy Jenkins mimics here, only WOW addicts who pass on the finer points of life to continue their adventures online. It’s a little scary. I prefer my geeks hustling around a state park with blankets for capes and clutching refurbished He-Man swords, not atrophying in front of a computer.

“Monster Camp” is an absolute treat, unveiling a pastime few outside the elf realm have seen before. The documentary treats the subject matter with respect, leading with observation, not judgment; it offers an unflinching look at the politics, sexual dynamics, and spine-snapping stress a weekend of role-playing brings to these players and it does so with constant entertainment and educational value. 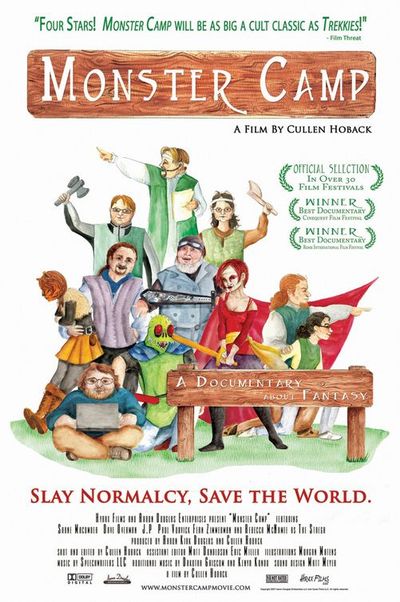