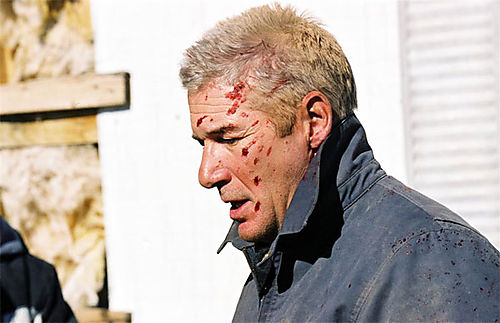 Another victim of the recent Bauer Martinez distribution fiasco, “The Flock” is at least more tolerable to watch than Amy Heckerling’s cringe-inducing “I Could Never Be Your Woman.” While not exactly a gift-wrapped present, it’s safe to say that “Flock” will certainly appeal to television cop drama junkies and those who love to see Claire Danes cry, which would now include every film she’s ever made.

Erroll Babbage (Richard Gere) is an outlaw public service employee who tracks the movements of sex offenders in his district. Nearing the date of his mandatory retirement, Erroll is partnered with Allison (Claire Danes), an easily-startled new hire who’s overwhelmed with Erroll’s brute ways. When a local girl is kidnapped and clues are left behind to taunt Erroll, the duo hit the streets of New Mexico trying to drum up clues to her whereabouts. For Erroll, the kidnapping is a personal affront, and he’ll do anything to keep his “flock” from harm.

Making his English-language directorial debut is Andrew Lau, the mind behind the beloved Asian cinema offering, “Infernal Affairs” (remade in America as “The Departed”). Obviously, Lau’s comfort zone have been thrown off once stuck in New Mexico with Hollywood stars, for “Flock” is riddled with problem areas immediately out of the gate.

A lurid thriller with rogue cop overtones, Lau can’t make “Flock” burst out of its shell. It’s a glum suspense story, and “Flock” derives its personality from its sexual deviancy background, where Erroll spends his time trying to keep order. With a great deal of the story built around the hunt for a dismemberment porn producer, “Flock” feels out of sync with the generic investigative aspects of the script. Lau searches for the hopelessness that drives Erroll, but there’s little interest created in solving the crime. I also found Lau’s visual ideas for an underground sex sanctuary to be a little too “C.S.I.” for my tastes.

Perhaps that’s the problem with “Flock” and the current state of thrillers: they all look like cruddy TV shows. It takes a truly confident director to shake some life into these anemic creations, yet Lau isn’t assertive enough to change course and strengthen the material with some directorial magic. “Flock” is certainly workmanlike and deflated, yet it’s oddly not all that easy to hate.

Richard Gere’s performance is a good reason to stick with “Flock.” He’s always amusing in these nutbag roles, chewing the scenery with his furious chest-heaving and rapid blinking, and the script gives Gere plenty of room to stampede. The partnership with Danes is a little one-sided, since all the actress is allowed to do is look on with amazement and occasionally weep, but Gere is strong here. He gives Erroll an emotional purpose that’s accessible and, at times, something to celebrate when the character goes vigilante and starts offering Irish kisses to the predators he’s supposed to be monitoring. Gere doesn’t exactly have range, but he’s terrific with rage.

The 5.1 Dolby Digital sound mix makes terrific use of sleazy atmospherics during the sexual predator hunt sequences, while putting the arid, windy locales into the surround channels. Tension through score and violence is also highlighted by the mix.

English for the Hearing Impaired and Spanish are included.

Something short of a “Seven” steal marks the conclusion of “Flock,” and presents co-star Kadee Strickland a chance to scream her way out of a career as far as I’m concerned (she’s awful in this movie). Lau goes for traditional “beat the clock” suspense staging to find his way out of the picture, and it leaves the film on a sour note; another example of conformity from what should’ve been a very odd, memorable potboiler. “Flock” is halfway entertaining when keeping tight on Gere and his small-eyed principal routine. Anything beyond that can just as easily be found flipping through the channels any day of the week. 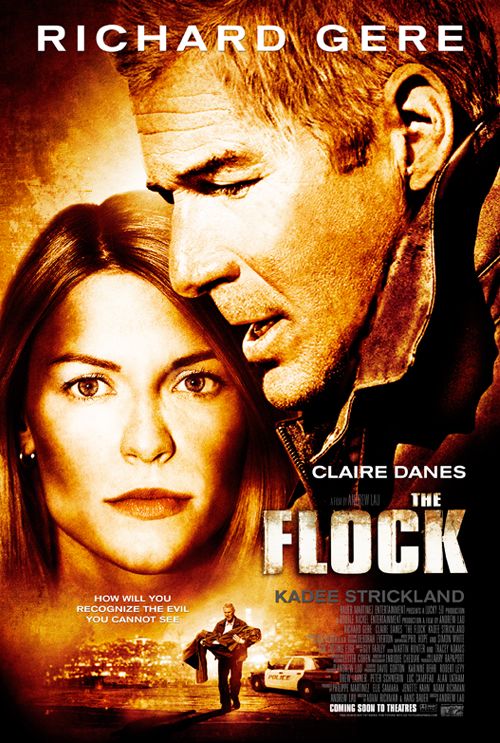 you lost me when you insulted "i could never be your woman." that movie was really funny. the fact that you disparaged it really made me uninterested in whatever else you had to say. in the future you might wanna stick to the movie at hand, instead of alienating readers by insulting movies that everyone knows are good. might wanna 'tap the breaks' on that ace. now what

I agree with the C-, but for 2 different reasons: 1. There was absolutely no reason given in the script for the Dains character to bond so quickly with the Gere character, or for her to so easily ignore usual police procedures. 2. The ending was innappropriate, not believable, with everyone in the office loving him once again. On second thought, maybe D.

The partnership with Danes is a little one-sided, since all the actress is allowed to do is look on with amazement and occasionally weep, but Gere is strong here.

This line made me laugh out loud!!!! Look on with amazement and occasionally weep????? That is just too funny!! I sometimes read Rotten Tomato reviews before I watch a movie, I know I will giggle half a dozen times now, in inappropriate places!