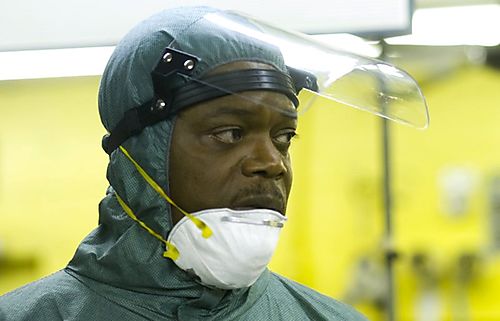 On the outside looking in, “Cleaner” seems like a dream. Blessed with an A-list cast, a capable director, and an appetite for “CSI” style mystery, the picture should have no problem offering up some suspense goodies to devour. However, “Cleaner” is far from pulse-quickening entertainment; it’s a bizarrely inert picture more consumed with following through on a watered-down plot than assembling impressive thrills and spills.

A former cop, Tom Carver (Samuel L. Jackson) now spends his days cleaning up crime scenes after the bodies have been dragged away. When a call sends him to the home of a powerful man, Tom finds the job peculiar, but doesn’t question his instincts. The next day, Tom learns the crime scene he wiped clean was tied to an elaborate police corruption ring, forcing him to seek the advice of former colleague and close friend, Eddie (Ed Harris). With the dead man’s wife (Eva Mendes) and police officials (Luis Guzman) asking questions he can’t possibly answer, Tom attempts to investigate the murder on his own time, finding clues that could jeopardize his life.

Granted, filmmaker Renny Harlin hasn’t enjoyed the most respected career in Hollywood, but the man churned out some fantastic entertainment in his day, including the 1996 barnstorming action bonanza, “The Long Kiss Goodnight.” I suppose my hopes were heightened upon learning that Harlin and “Kiss” co-star Jackson were reuniting, since their chemistry worked so wonderfully before, why should anything change?

“Cleaner” provides the hard lesson that it’s never really the chemistry but the material: “Kiss” was penned by maestro Shane Black, and “Cleaner” was dreamt up by novice Matthew Aldrich. Don’t get me wrong, “Cleaner” actually makes quite a few attempts to smuggle in character dimension, most notably in the strained relationship between Tom and his emotionally-wounded daughter Rose (Keke Palmer). The picture gets an impressive amount of dramatic mileage out of their fractured interaction, providing Tom with a solid reason to stay out of trouble, yet be understandably drawn to a puzzle he knows he can solve.

Problems arrive with actual tension, which is amazingly absent throughout “Cleaner.” There’s a dryness to the story that Harlin can’t shake off, even with an impressive directorial effort that emphasizes Tom’s strict adherence to routine, and the icky minutiae of crime scene blood coagulation and other matters of the splayed dead. The mystery is straight out of a television procedural drama, unable to make the leap to theatrical standards with its semi-predictable, semi-lethargic twists and turns, along with downright ridiculous motivations. It’s a yawning assemblage of threat for Tom and it never ignites like it should. Instead, “Cleaner” is stunningly obvious; a film more concerned about the architecture of suspense than actually making the effort to achieve any.

However tired the proceedings become, I did enjoy Jackson’s sedate role as the eye of the corruption hurricane. Aldrich’s screenplay is careful not to make Tom a saint, and Jackson plays that heroic reluctance rather well. Harlin’s intriguing visual design also keeps the momentum somewhat alive through most of the picture.

The 5.1 Dolby Digital track is a vigorous mix that employs the surrounds nicely for extra atmospheric punch. Scoring and soundtrack cuts are separated pleasingly from the dialogue, and brief lunges of violence are given the audio full court press.

A feature-length audio commentary with director Renny Harlin is jam-packed with production information and artistic motivations. Harlin is always an engaging speaker, and he submits plenty to enjoy here: explaining how Louisiana subbed for New Jersey; his desire to make a thriller after years of horror and CG-heavy material; how Shreveport cops are the most easygoing guys around; detailing his journey to Malibu to convince Ed Harris to join the cast; and describing character backstory and how the little edges of the script help the feature to avoid cliché.

Harlin is breathless, which is a good thing. It’s a great track. The commentary is also subtitled in Chinese and Thai.

"Deleted Scenes" (15:18) add psychological depth to Tom, and strengthens the father-daughter relationship of the story, but these trims don’t add up to very much.

It’s not that “Cleaner” is a terrible film, it just doesn’t rear back and sock the viewer in the jaw like a great thriller should. It’s mild sauce from the first frame to the last, and with these actors and Harlin aboard, clearly there’s potential here that’s being wasted. 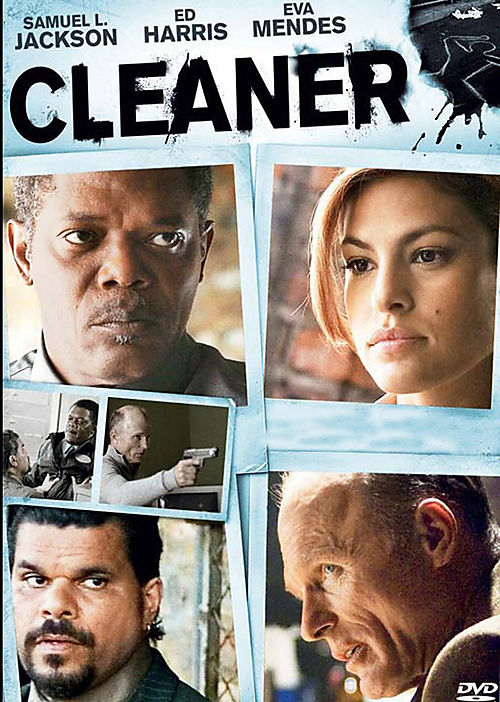