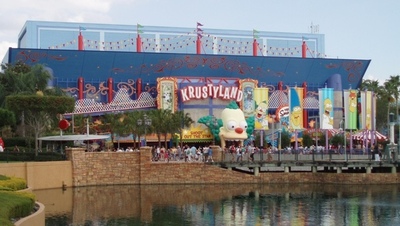 Over the next two years, the Orlando theme park wars are going to reach unheard of levels of showmanship. After years of construction slowdown and financial baby steps, the three major theme park entities (Sea World, Universal, and Disney) are all currently in the heated process of rolling out several big-ticket attractions, intending to inject a little exhilaration into the Orlando area that, if aimed just so, will alter the stagnant attendance rankings the suits are always looking to goose. One of those aggressive new builds is “The Simpsons Ride,” located at Universal Studios. Scheduled for a grand opening in mid-May, I was stunned to spot the attraction conducting a soft-open period, right in the middle of a blazingly hot, tightly packed weekend afternoon. Seizing a rare opportunity to take in a new attraction in its late testing phase, I literally jumped down Krusty the Clown’s mouth and braved an hour-long line to experience Universal’s latest. 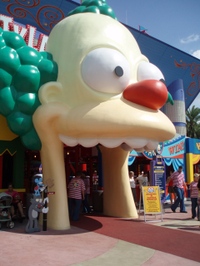 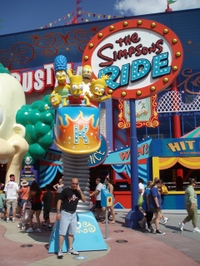 Themed as a visit to Krusty’s fledgling “Krustyland” park, the gist of the attraction has the cantankerous clown looking to boost his attendance numbers with a new ride, leaving the testing phase to the Simpson family, along with, of course, us. As we climb onboard a roller coaster car, our adventure is quickly thwarted by Sideshow Bob, who has escaped from prison and is once again on the hunt for revenge. A frenzied ride through Krustyland, several near-death experiences, and a radioactive monster Maggie ensues.

“The Simpsons Ride” raised eyebrows and tightened fists last year when it was revealed that it would occupy the “Back to the Future: The Ride” attraction building. Amazingly, Universal has done an incredibly comprehensive job converting the location to the intentionally dubious charms of Krustyland, covering the old Institute of Future Technology thoroughly with a carnival-themed makeover in extreme blue and red paint, and updating archaic queue displays with sharp HD monitors that give the extensive lines of thrill seekers plenty to enjoy while waiting to join Krusty. Surrounding the attraction are empty game booths that lend the atmosphere a needed jolt of carnival theatrics, and displayed around the building are humorous sideshow posters for rides and musical acts that give Krustyland some backstory. 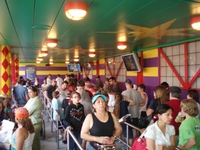 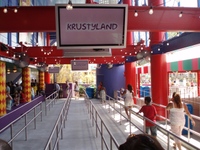 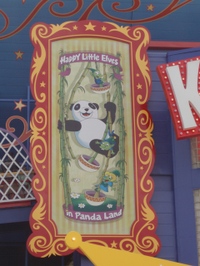 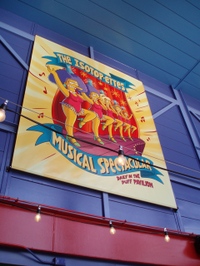 For added fun, “Ride” even incorporates a clever cameo by Doc Brown (voiced by Christopher Lloyd) into the queue presentation, revealing that Professor Frink’s careless tinkering with time led to the sale of the Institute to Krusty.

As mentioned before, the queue for “The Simpsons Ride” is an amusing time-waster, with the monitors rolling out clips of the show (most concerning the Simpsons’ various trips to fictional theme parks) while also intricately threading in the set-up for the coming experience. Of course, there’s always time for horsing around, and there’s plenty of newly-animated hijinks featuring Homer and the gang to keep the fans attentive, but the old clips remain pure gold. Any chance to revisit the classic “Duff Gardens” episode is always a treat. 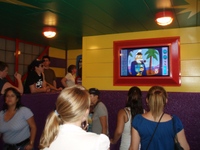 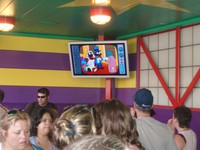 Once inside the attraction, the preshow area offers a closer inspection of hilarious theming, sending guests into lines located near carnival booths manned by the animated characters: Hans Moleman chats up his information booth, Groundskeeper Willie taunts guests to try and topple his milk-bottle toss, and Patty and Selma create a boyfriend out of the items in their lost and found booth. Unlike many queues that tend to lay there and expect the guests to unearth the entertainment themselves, the “Ride” experience is immersive and engaging, bringing guests into the disreputable Krustyland world with outstanding visual concepts and consistent “Simpsons” humor. It’s an impressive next step in ride-wait-time entertainment, upping the quality of distraction that, frankly, Sea World and Disney should pay close attention to. 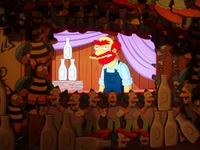 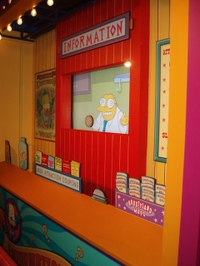 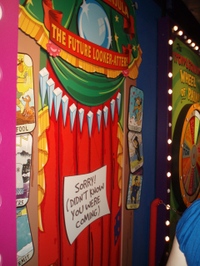 The final step of this winding journey is the ride itself. After a brief safety video with blood-spilling titans Itchy and Scratchy, the entrance cracks open to reveal our vehicle, which features large gull-wing doors in another tribute to “Future,” not to mention the ride itself, which is a similar motion simulator experience, not an actual roller coaster as hinted on the building’s exterior. 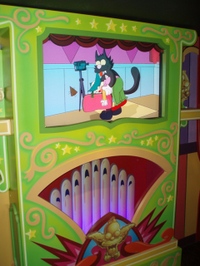 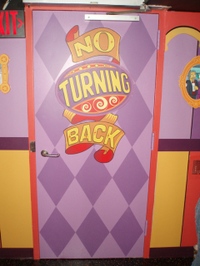 The improvements are obvious immediately: the ride film is now digitally projected, leaving a crisp image free of any defects; the movements of the vehicle are smoother and more controlled (unlike the chiropractic experience of “Future”); and the use of scent now adds a new dimension to the motion-simulation environment. 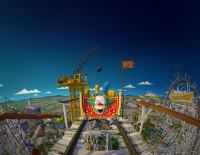 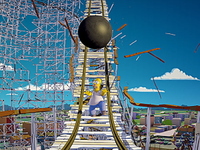 What’s somewhat shocking is the CG animation used to bring the Simpsons and Krustyland to life. The queue videos are strictly 2-D animation segments: the “Simpsons” we’ve all enjoyed for two decades now. The “Ride” film scraps that, employing clean, bulbous images to sell the mayhem. Aesthetically, it’s a mess. However, I can appreciate the need to swap animation styles to help build the chaos of the ride itself and reach sensory overload. Even so, it’s really not “The Simpsons” when it looks like a Pixar film. Maybe that’s just me, but if there’s one tinge of disappointment with “The Simpsons Ride,” it has to be the transitional jolt between animation styles. 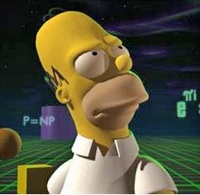 Overall, “The Simpsons Ride” is a roaring success, taking basic visual ingredients started by the “Future” ride and turning them inside out with more elaborate technology and uproarious writing. It contains everything expected from an experience branded with the “Simpsons” label, beguiling guests with sharp satiric jabs at the Disney Park overlords and reveling in the considerable history of the brand name. Fans will adore every last bite of this Krusty-approved goodness, and the “Ride” should have no problem entertaining the 25 people out there in the world who have never bothered to learn the ways of Homer. It’s a crowd-pleaser, offering exciting dimensions to these beloved characters while staying firmly planted in established comedic foundations.

Even more impressive is how the production has managed to pull off the attraction without the participation of Harry Shearer, who, for obvious reasons (think a burlap sack with a dollar sign printed on it), decided to take his ball and go home. I made a conscious choice before riding to try and catch the vocal seams, since Shearer is the pipes behind such iconic characters as Montgomery Burns, Kent Brockman, Principal Skinner, and Ned Flanders; yet the magic of “Ride” is quick to take over, and I never noticed his absence. It’s amazing how well the rest of the characters are employed to patch up the holes.

“The Simpsons Ride” is a thrilling addition to Universal’s newly-energized roster of attractions, taking a beloved, but admittedly stale segment of the park and juicing it up with a turbulent discharge of colors, comedy, and cartoon chaos. The experience also introduces a new chapter of insanity to the already thick bible of “The Simpsons,” giving Universal Studios a new must-see attraction to captivate the masses. 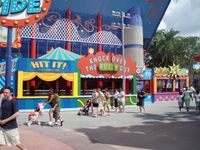 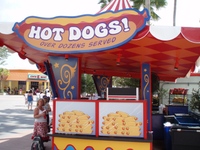 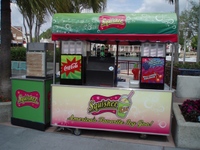 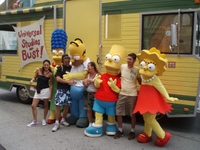 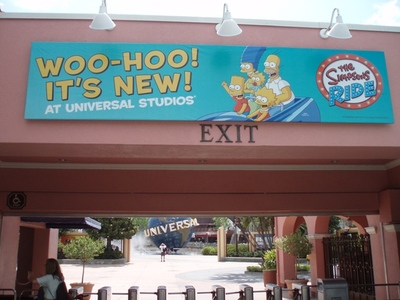 Went on it last week, as part of the tech rehearsal soft-open (a welcome surprise), and pretty much agree all the way.

Great breakdown of the ride, thank you. Look forward to experiencing it first-hand.