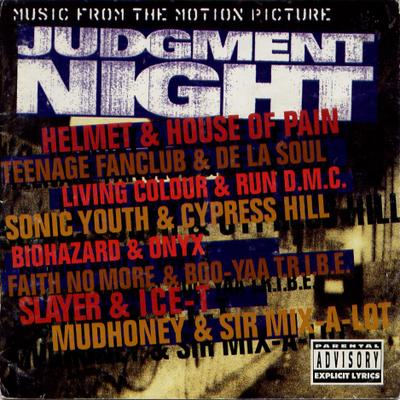 “Judgment Night” was a forgettable 1993 suburban-paranoia action film that starred Emilio Estevez as the “average white dude” and Denis Leary as the charismatic heavy. Lordy, I haven’t viewed the film since its theatrical release, but peeking back into the “Brichives” reveals that I enjoyed the picture when I was a pup, but found it too “clichéd.” I was already using asshat critic-speak back then. Not bad.

The film has been lost to the humiliation of Saturday afternoon basic cable airings, and rightfully so. Looking at this trailer and the movie comes off like the goofiest creation ever. “Don’t take the ghetto off-ramp, morons!” Funny what we thought was bad-ass back in the early 90s. I should shoot a remake here in Phoenix with Patrick Wilson and Carlos Mencia and call it “En el segundo pensamiento, el tráfico es asombrosamente manejable.”

What sprang from the failed box office loins of “Judgment Night” was a surprisingly inventive soundtrack. Trying to distance itself away from the traditional film music melding of diverse pop smashes, “Night” was looking to build a different vessel by inviting the top artists of the day in the rap and metal/grunge realms to form booze-soaked alliances and rock the pants off the masses. Sure, “Walk This Way” paved the road, but “Judgment Night” was perhaps the finest implementation of the genre unification concept. It’s a remarkable CD.

Only recently did it dawn on me that I never actually owned this musical diamond on CD. I had the cassette back in high school and wore it out during the endless, angry bus rides, but never upgraded. I’m not clear what provoked this surge of headbangin’ nostalgia, but I looked around and found the used CD for 82 cents online. I guess demand for House of Pain has died down quite a bit in recent years to ramen levels. Since iTunes is nothing more than an elaborate torture device intended to make users hate music, I snapped up the CD and rushed to listen when it arrived in the mail shortly after.

Outside of a few duds (Del may be a Homosapien, but he certainly ain’t funky), the collection holds up wonderfully, lashing out in raw directions while also retaining a sticky icky mellow mood. Perhaps it’s my crusty memories at play here, but I still find this CD exciting and innovative. Again, I’m no horn-rimmed music snob, but there are a few tracks of pure joy that ache to be rediscovered.

The first would be the Run-D.M.C./Living Colour team-up for “Microphone.” I remain a steadfast believer in the power of Living Colour and they make sweet Wonder Twins power here with the godfathers of rap. The song is peculiar blend of screeching guitars, anvil rhymes, and funky footsteps, and it comes together like a dream. These guys should bang out an entire album together. Lord knows Corey Glover could still use the work.

The other standout is “Disorder.” A more aggressive, middle-fingered journey into the amalgamation of rap and metal, “Disorder” is a RPG of a tune, written in the shadow of the L.A. riots of 1992. We know this because Ice-T keeps yelling out “L.A. 92!” throughout the song like a maniac. The track is truly a caustic metal jam recorded when Slayer was still interesting and young, and the moniker Ice-T elicited fear in white people everywhere. Now when I hear Ice-T’s name, I always hope “and nude photos of wife Coco” is not far behind.

I’m not sure if this is a recommendation or an embarrassing jog around the memory trail, but it was a blast to wrap my ears around “Judgment Night” again. I actually purchased two soundtracks that day from the same era, but I’m reluctant to mention the other one at this time. Stay tuned.

Now let’s turn up the rap-rock and tip over a bus! 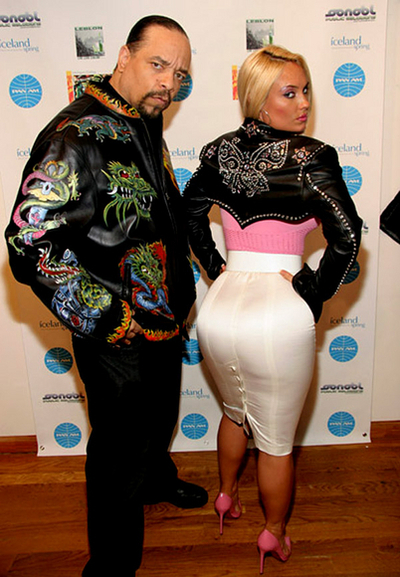 Did that other soundtrack happen to be "The Cutting Edge?" I know you have a sweet spot for that flick.

For a very, very, VERY long while I thought I was the only person on earth who was even aware that this cd had even been made. While the movie itself could have been a great deal better (I don't think it was horrible, it just wasn't very good), I still listen to the music today.

great post. i still have the 12" of the "Just Another Victim" remixes - rare inspired moments of the '90s, indeed.