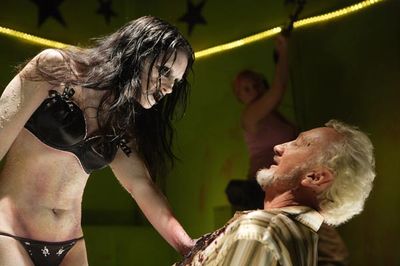 “Zombie Strippers!” You shouldn’t really need more than a title to explain the experience contained within. However, what if I wrote that the picture is actually an elaborate critique of the Bush Administration and current political and social woes? Boy, I would sound nuts. But then again, so is “Zombie Strippers!”

When a government military squad is unable to contain a viral zombie outbreak, the sickness spreads to a Nebraskan underground strip club, infecting the star of the stage, Kat (Jenna Jameson). When club owner Ian (Robert Englund) observes that Kat’s newly-infected routine enchants the loins and wallets of his patrons, he encourages more of his dancers to join the zombie elite. While some of the strippers reject the offer, the rest are quick to enlist in the army of the undead, finding more popularity, and food, than ever before. When the situation quickly gets out of hand, Ian and his staff declare war on the ladies, causing a riot inside the club, and attracting the attention of the military.

“Strippers” is schlock, no doubt about it. Writer/director Jay Lee has feasted on a litany of grade-Z horror films to dream up his screenplay, and while his affection is endearing, his directorial skills could use some sharpening. Serious sharpening. “Strippers” is an ambitious piece of junk that somehow longs to be culturally relevant. It uses the distraction of female breasts to somehow contort itself into a semi-satiric, mostly-idiotic comment on the future world order, where G.W.B. has accepted a fourth term in office and America has made war with the entire globe, even Alaska.

That’s right: this is a movie that contains Jenna Jameson shooting billiard balls out of her vagina and characters on an existential quest of self-purpose, who thirst to maintain their voice in a fascist country that squashes free thought to profit from misery. Yikes. And here I thought the picture was about boobs and bile.

Lee has better luck with the horror elements of the story, and while the CG-enhanced carnage looks embarrassingly substandard, the picture soars in the makeup department, effectively turning the cast into a pile of slimy open wounds and crispy rotting skin, with exceptional work done on Jameson. Of course, “Strippers” was shot during the adult film superstar’s “I swear I’m healthy” phase when she weighed 70 pounds and ballooned her lips up to the size of a naval flotation device, but she’s easily the best thing about the picture. Generously digging into the gore-smeared sexuality of the role along with all the flesh-munching, Jameson is impressive and silly; the lone cast member to articulate camp without winking pathetically into the camera.

Lee lobs the comedy very broadly, with racial, gross-out, and political jokes blasted at the screen with typical eye-rolling results. Part of the failure is the flaccid writing, but a majority of the picture’s faults are tied to the low standards of the production, which employs ugly lighting and iffy HD camerawork to cover the no-budget seams. With nowhere to turn, Lee leans into the cheese quotient of the material, and if there’s anything worse than camp, it’s self-aware camp.

With actors mugging for the camera, bodies torn apart, and Bush-age politics grilled, it doesn’t take much to feel overwhelmed with “Zombie Strippers!” It’s certainly meant to be a wild ride of breasts, bullets, and blood, but it feels more like a plastic bag slowly tightened over your head. 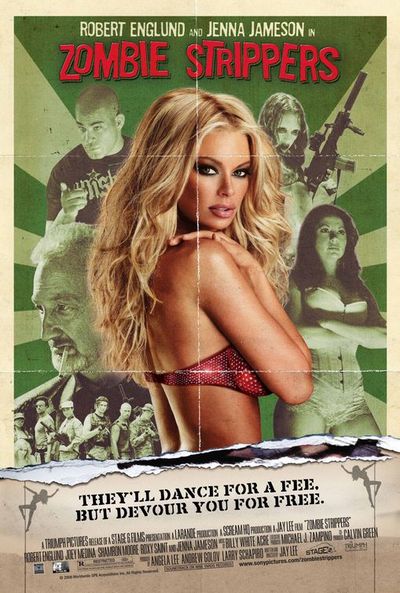