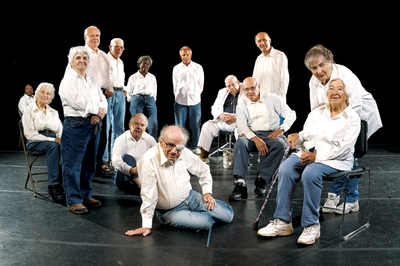 I understand that the nauseatingly titled “Young @ Heart” is intended to be a joyous celebration of life, but I was bothered by the film in ways I’m having trouble putting my finger on. It’s a heavy documentary about such a cheerful moment of self-expression, but much like last winter’s “The Bucket List,” it is ultimately a story of death, and that is too much weight for this fragile film to carry.

The Young at Heart Chorus group was created in 1982 to give seniors a chance to perform and be social. Starting off with a vaudeville-influenced show, the Chorus, under the direction of Bob Cilman, soon turned to more daring areas of material. Now devoted to spinning their own take on alt-rock and soul hits, the group tours the world showing audiences that just because you’re old doesn’t mean you can’t memorize the lyrics to a Sonic Youth song.

Directed by Stephen Walker with a sprightly BBC tone, “Heart” is one affable motion picture, taking great advantage of the varied reactions audiences have to viewing a collection of senior citizens spending weeks rehearsing songs that aren’t traditionally associated with oxygen tanks and liver spots. Coming together in a Massachusetts rehearsal spot, “Heart” observes the preparations the group makes for their latest concert program, “Alive and Well.”

Cilman is the ringmaster of the group, and I admired his patience. “Heart” is made up almost entirely of rehearsal moments in which the members can’t quite find their rhythm or forget the lyrics. It’s exasperating to behold, and while Cilman does snap from time to time, he remains shockingly good-natured about the process. The seniors are equally as upbeat about the concert, and Walker’s camera is eager to capture the pleasure of performance for many of the singers, who delight in this circle of amateur entertainers.

Obviously, with the median age about 85, “Heart” has to deal with aging and even death at some point. Tragedy befalls the Young at Heart team twice during the rehearsal, which opens up the documentary to take a look at how grief affects the group. It’s an important piece of this strange puzzle, but Walker’s effort to mourn along with his subjects is oppressive and strangely disconnected to the rest of the feature. For a documentary already overlong by 40 minutes, memorializing the fallen members is undoubtedly commendable, but takes the wind out of the movie’s sails. Polite tributes are in order, not an elongated dirge. It turns “Heart” away from a modest delight into a creation that requires a night of heavy drinking to flush out of the mind.

“Young @ Heart” is eager to say so much about aging and the buzz of performing, but the delivery and tone are confusing, and it leaves the picture an untidy bucket of sensations. It’s certainly a film that’s cruel to disagree with, but for all the goodwill and positivity it brings, there’s a hollow, gimmicky quality left behind that doesn’t sit well when the picture starts to take matters seriously. 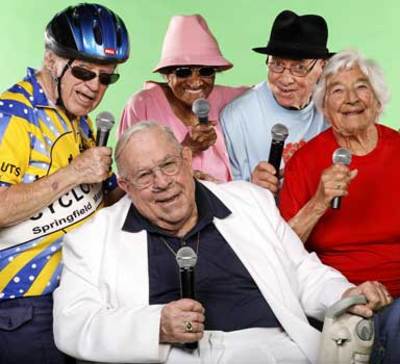 You've got to be kidding. Either you hate life or you don't appreciate music. This movie transcends the generations in a way which most films do not.

And like any flawed critic, you give away too much about the movie.

This is a movie about life. Death is a part of life. Get over it.

That 'nauseatingly titled...' Y@H only refers to the name of the group - and being a documentary, their name should be in the title. The subtitle is the punch line (and, no, it isn't a joke). To even bring up "Bucket List" makes it an apples-and-oranges situation and confusing.

Try not to over-play the oh-so-jaded bit, it makes one wonder if you're also an unemployed actor.

Dude, you just didn't get it. While not a perfect movie, this little documentary had an obvious affection for its subjects and their lives. These people are all in their 70s, 80s, and 90s - to document their experiences with Young@Heart is to document all the goofy joys in trying to sing "Yes I Can Can" (which they almost couldn't couldn't) and all the sobering realities of their losses. How can you call it "gimmicky"? These are real people living real lives and doing it with such grace, humor and earnestness. I loved each and every one of them. I want to go have breakfast with Lenny. I want to sit and talk with Stan. I want to dance with Dora. I want to have dinner with Jim and his wife. These are not gimmicks, these are people.

I agree wholeheartedly with this review. "Heart" is a piece of manipulation, not a heartfelt documentary.

It's cold and lifeless.

"Dude, you just didn't get it. While not a perfect movie, this little documentary had an obvious affection for its subjects and their lives."

I vehemently disagree. The 'love' for the subjects is hallow, and thats the problem.

The lingering shots of Joe on the poster that says "Alive and Well" is not only over the top heavy handed irony, but they are in my opinion, disrespectful, and exploitative.

Brian, you are a amazing.