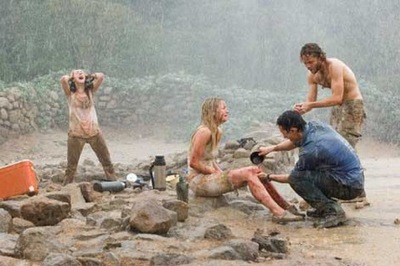 If Herschell Gordon Lewis directed “Little Shop of Horrors,” “The Ruins” would likely be the end product. A skin-crawlingly diabolical horror film, “The Ruins” is a sobering reminder that the screen can still generate anxiety on a massive scale when it meets material that takes few prisoners.

On vacation in Mexico, four college students (Shawn Ashmore, Jena Malone, Laura Ramsey, and Jonathan Tucker) meet a German tourist (Joe Anderson) looking to break away from the grind of perfect beaches and bottomless margaritas. Their adventure destination is a lost Mayan temple located in the middle of a dense jungle, and once arrived, the group tragically learns they are not welcome by the vicious locals. Trapped on top of the temple, the students quickly grasp they are not alone, finding the flowers and vines that surround them have a taste for blood. Toying with the group, the flora waits patiently as injury and madness soon settles in, leaving the hapless youngsters with no means of escape.

Adapted by Scott Smith (“A Simple Plan”) from his own novel, “The Ruins” is governed by one rule: razor-sharp simplicity. There’s no undercurrent of absurd social commentary, no extraneous subplots vying for screentime; “The Ruins” is a straightforward exercise in endurance and disturbing imagery. Not having personally experienced the novel, I didn’t sense any gaps in the storytelling, which is a credit to Smith, who overhauled his original plot to streamline the agony. It’s a triumphant piece of scripting, securing the tension to the front burners at all times and staging sequences not for their jump-scare potential, but for more gut-wrenching results that will surely leave weak-kneed audience members sprinting for the exits.

Director Carter Smith (“Bugcrush”) is game to go where Smith leads and he rarely breaks the film’s constant haze of dread. “Ruins” dabbles in psychological torment, yet the heart of this beast lies in old-fashioned displays of gore, with the characters digging around in their own bodies with knives in a pathetic attempt to keep the vines literally out of their system. Certainly this isn’t high art, but “Ruins” is near-perfect at manipulating its audience, emphasizing physical threat and consequence, with a profound admiration for armrest-squeezing bodily harm on a level few recent horror productions would dare explore.

The acting by the young leads is better than expected, especially the work committed to the screen here by Laura Ramsey, who is the only member of the cast to reach the next level of despair as the vines attempt to find a warm home under her skin. Smith wisely keeps the actorly hysterics to a minimum, preferring visual communication of suffering that’s incredibly more effective riling up the audience than bad actors allowed free reign to act badly.

It could be the steady diet of numbskull horror offerings lately, but I was with “Ruins” for the entire ride, delighting in the merciless direction and fantastical botanical twists with eyes wide open. It’s one of those strap-in-and-ride-it-out experiences that are all too rare; forgoing elaborate strands of exposition to settle on more direct lunges of terror. It’s a marvelous nightmare machine. 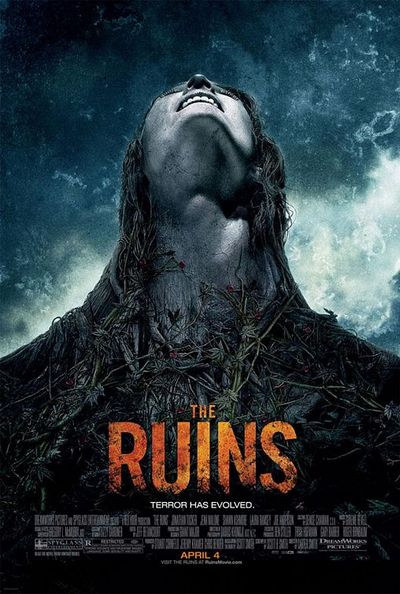 When did Aaron Ashmore (Smallville) become Shawn Ashmore? This is the same actor, isn't it?

No, they aren't the same actor... they're identical twin brothers.