Film Review: Then She Found Me 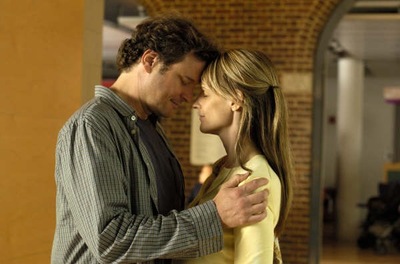 Helen Hunt took herself out of the Hollywood game eight years ago after sleepwalking through the Mel Gibson embarrassment, “What Women Want.” She’s acted in a few projects here and there, but “Then She Found Me” feels like a breaking dam: the overflowing artistic release of an actress fed up with what’s been handed to her. Now Hunt takes matters into her own hands with this raw feature film, her directorial debut.

Now 39 years old, April (Helen Hunt) is desperate to have a baby of her own. However, to get to a place of motherhood, April has to deal with her divorce from husband Ben (Matthew Broderick), the death of her adoptive mother, and the persistence of her birth mother (Bette Midler), who, after all these years, is ready to be a part of her life. Also on her plate is an itchy romance with single father Frank (Colin Firth), an equally unhappy individual with passions that excite and frighten the newly-available, baby-starved April.

Adapted from the 1990 novel by Elinor Lipman, Hunt (who also co-wrote the screenplay) has molded the material into an expression of pain so piercing, it threatens to overcome the whole production. “Found” showcases the lives of some seriously miserable people, and the plot piles on the hopelessness relentlessly, making April’s character arc a shoo-in candidate for the “most unlucky fictional character” award. However, Hunt’s direction is sympathetic and graceful, keeping “Found” from total gloomy disintegration. She understands the necessity of maintaining a sincere mood to the piece, sympathizing with the characters and their individual needs and relationship angst. In all, it’s a rather gentle take on crushing disappointment.

Hunt’s camerawork is refreshingly unobtrusive, giving space to her superb cast, who each take their position memorably in April’s babyfever nightmare. The standouts are easily Hunt herself, who looks to be scraping away the depressive gunk found at the very bottom of her soul to inform April’s frustrations (something tells me sections of the film are autobiographical), and Midler, who’s been kept away from a role this fertile for far too long. Funny, touching, and impressively subtle, Midler is a dream, executing her best performance in over a decade as April’s deceptive, yet caring, birth mother. Sharing ace chemistry with Hunt, Midler’s scenes are the jewels of the film; a reminder of how impressive her talent is and how much her recent career direction has failed to capitalize on her gifts.

“Found” does get a little grabby near the conclusion, attempting to smother April with even more doubt and heartache to manipulate the character into a place where her final motherhood choice can be better appreciated and cooed over; it’s much too late in the game, but it doesn’t smudge the rest of the picture. Helen Hunt has always been a strange screen presence, yet her own direction of “Then She Found Me” reveals a newly-energized place for her acting, requiring astoundingly naked emotional pull that assists the picture in uncovering some unsettling, yet superbly rewarding moments of emotional truth.