Film Review: The Life Before Her Eyes “The Life Before Her Eyes” is a tender film of internal discoveries that doesn’t need any sort of artificial push. An adaptation of Laura Kasischke’s novel, the picture is yearning to follow the literary pathway led by the author, yet quickly becomes a film better at using its own artistic choices instead of trying to communicate established ones.

As a troubled teenager, Diana (Evan Rachael Wood) found difficulty dealing with the harsh realities of life, only finding comfort in the company of her best friend Maureen (a lovely turn by Eva Amurri). After a brutal school shooting leaves Diana shattered, it leads her to actively search out a better life for herself. 15 years later, Diana (played by Uma Thurman), struggles with the anniversary of the shooting, trying to keep her own family from slipping out of her control when the fragments of the violent event begin to tear away at her again.

“Eyes” is an intricate character study motivated by the true price of conscience. Director Vadim Perelman (“The House of Sand and Fog”) treats the material like a delicate flower, gently nursing the elements of the story into full bloom. From a filmmaking standpoint, “Eyes” is a gem: a lush, dreamlike voyage involving lives lived and lost, with the action split down the middle between Diana as a teen starting to feel the effects of her disobedience and disinterest in responsibility and the elder version, opening her eyes to the cyclical traps she’s fallen into.

The character arcs here are the film’s only real contribution of drama. “Eyes” is not a tightly-structured observational tale, but more of a shifting spotlight of quaking interior turmoil. The roles are superbly realized by Wood and Thurman, but the real backbone of the picture is Perelman, who takes great care to weave the small tragedies into a wounded whole. Not everything is accounted for in “Eyes,” with the film negligently hustling through some important plot threads, but it remains a compelling unfurling of pain, sharply nurtured by Perelman’s visual touches of behavioral repetition and the thematic use of moisture that nurtures a curiosity answered by the film’s disappointing final movement.

Soul-searching meets otherworldly intent in this misguided ending. Perhaps taking Kasischke’s prose to its natural conclusion, “Eyes” closes on an unsatisfactory note that feels detached from the rest of the picture. Perelman weaves a poetic film of mystery and empathy, perfectly capable of carrying itself on its own terms, but the demands of the adaptation process compel the filmmaker to stage an unnecessarily sucker punch ending. It kneecaps “The Life Before Her Eyes,” turning the film into a cheap gimmick when it was best left as an engrossing lament for the unavoidable shackles of adulthood. 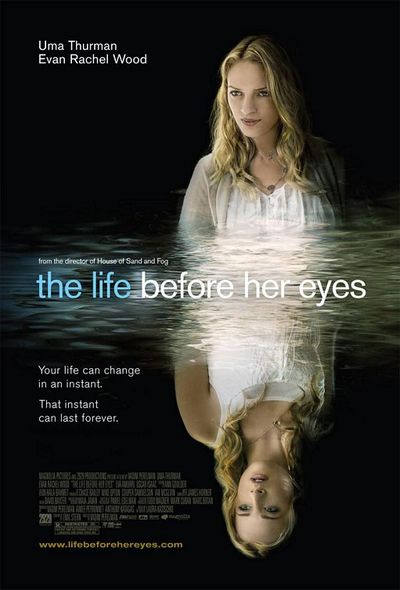