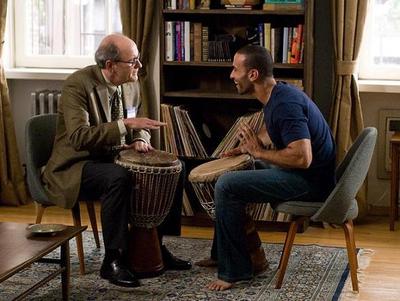 In today’s crowded marketplace of blockbuster motion pictures, it’s unimaginable how a delicate picture such as “The Visitor” could be produced, much less find theatrical distribution. Perhaps the answer here is in the execution; a polite, gentle drama about friendship and musical expression, “Visitor” dances slowly, but effectively, working its way to the heart.

Walter Vale (Richard Jenkins) is a widowed college professor trying to connect with his late wife through failed piano lessons. Sent to live for a short time at his neglected New York City apartment for a conference, Walter finds Tarek (Haaz Sleiman) and Zainab (Danai Jekesa Gurira) have already made a home there. At first startled, Walter soon reaches out to the frightened couple and allows them to stay. During this time, Walter expresses curiosity with Tarek’s skills playing an African drum. Tarek, surprised by Walter’s offer of friendship, begins to teach the shy professor the concept of rhythm and the joy of performance. However, the relationship is cut short when Tarek is arrested and revealed to be an illegal, locked away in a detention center while Walter and Tarek’s mother Mouna (a wonderful Hiam Abbass) hope to find a way to free him.

Writer/director Thomas McCarthy’s previous feature film was 2003’s muddled drama “The Station Agent;” a clunky debut production that, while lacking any surprise, at least showcased the filmmaker’s gift for mood and allegiance to patient storytelling. “The Visitor” inches McCarthy’s skills further; a courteous, unexpectedly absorbing drama that continues McCarthy’s fascination with how relationships are formed and ultimately tested.

While a satisfying picture, “Visitor” has a difficult time overcoming its vanilla introductions. McCarthy isn’t a forceful filmmaker, instead preferring the audience simmer in the moods and locales of the picture. The approach only really enhances the performances, which expectedly excel through a combination of talent and McCarthy’s preference of emotional space, allowing the cast to feel around for reactions. Jenkins and Sleiman make for a swell odd couple, eschewing international adversarial stances to lock hands in more subtle expressions of kindness. The moments of their drumbeat bonding are exquisite sequences of restraint and unspoken connection, and both Jenkins and Sleiman commit to the premise whole-heartedly, making McCarthy’s plot sing with a realistic outline of benevolence.

9/11 fingerprints dot the backdrop of “The Visitor,” and the film eventually deals with immigration rights and the general exclusionary tone of New York City due to strict citizenship requirements. McCarthy doesn’t belabor the point, instead weaving the issues carefully into the script and the cinematography. “The Visitor” doesn’t preach, but it doesn’t ignore the harsh reality of the new world order either, using that anxiety of faceless opposition to help squeeze some tension into an otherwise leisurely motion picture.

“The Visitor” eventually complicates as Walter’s sympathy extends to Mouna, who fills the lonely man with a long desired piece of female companionship. McCarthy negotiates these certain narrative wrinkles successfully, but rarely does the film demand more than a tempered assessment.

You can read an interview with the filmmakers here. 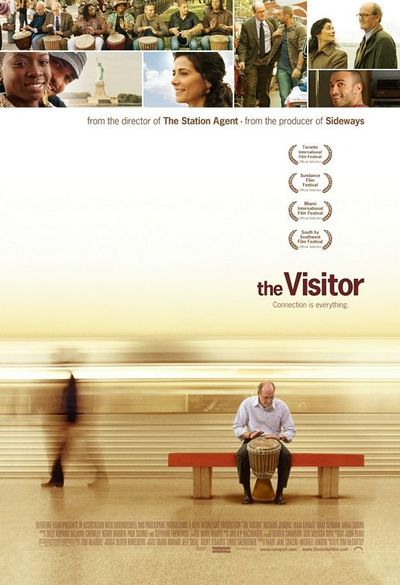 One climactic scene in "The Visitor" is the illegal Tarek saying to his American visitor at the detention center where he's being kept prior to his probable deportation "I didn't do anything wrong!", or some such. Does the American remind him that he came to this country without permission? No.

This scene, scripted in such an outrageously biased way, earns the film a Golden Propaganda award of the first water. It's a good movie for the revitalization of Walter theme, but blatantly preachy in its political theme.

Thanks alot for the information. Really appreciate it. I've Subscribed to your RSS feed for Further updated. I've seen this movie.. it has been a really great one. Nice Review