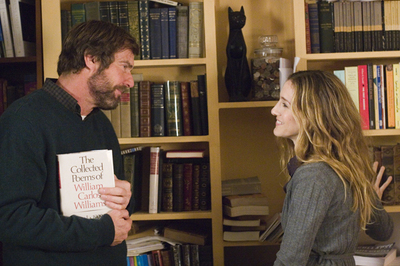 “Smart People” is a title that accurately describes the characters in the film, not necessarily those behind the camera. A jittery domestic dramedy, “People” squanders a capable cast on moldy material and problematic editorial decisions, resulting in a nomadic character study hastily winnowed down to indigestible pabulum.

Lawrence Wetherhold (Dennis Quaid) is an English professor at Carnegie Melon University, where he lords over his students with intellectual might. At home, things are worse. Still reeling from the death of his wife, Lawrence barely interacts with his resentful son (Ashton Holmes) and overachieving daughter Vanessa (Ellen Page), and considers his adopted brother Chuck (Thomas Haden Church) a total disgrace. When Janet (Sarah Jessica Parker), a former student with a crush, reenters Lawrence’s life, the two begin a tumultuous courtship, opening the professor’s eyes to his cantankerous, pretentious behavior.

Not surprisingly, “Smart People” was written and directed by two individuals who have never made a feature film before. The lack of experience shines throughout the picture; a character study of damaged folk who wield intellect as a means to prop up their shattered lives, providing comfort when basic human interaction fails them.

The script by Mark Poirier is a sprawling tale of familial misery, perhaps more suited for the literary realm, not a 90-minute movie. While remaining modest in intention, there’s still a mouthful to chew on with “Smart People.” It doesn’t take long for the subplots to slip out of director Noam Murro’s control, since he can’t locate the intricate tones required to pull off complicated acts of desire, regret, and disillusionment without the entire film wobbling uncontrollably, threatening to crumble at a moment’s notice. However, it’s possible Poirier and Murro may not be the true culprits of artistic failure here, since the film feels chopped to smithereens from a longer, more patient cut by someone not associated with the production from day one.

The edits suck the spirit right out of the film, leaving substantial character arcs and general motivations unfinished. There’s a critical absence of coherency in the pairing of Lawrence and Janet, who embark on a relationship of confusing agendas and even more befuddling resolution. Even more cloudy is the bond between Vanessa and stoner Chuck, which kicks off as a standard “she’s a young Republican, he’s got Peter Pan syndrome!” odd couple scenario, but quickly moonwalks into elusive sexual attraction. To leave a plot-thread this complicated with only a moment’s discussion is maddening, but again who is to blame: the butterfingers of Murro or Miramax editorial butchers who apparently cleaved away 100 hours of character minutiae to make this thorny picture “sellable?”

It comes as a relief that the acting isn’t affected by the aimless story, with special attention paid to Dennis Quaid and his superb aura of collegiate arrogance and suburban anesthesia. It’s a complicated character of potentially exasperating quirks made interesting by the actor’s distance and disheveled body language. Thomas Haden Church also gets in some satisfying screentime, though his role as a shiftless smart-aleck is nothing revolutionary. However, Church finds something of a soul within the traditionally robotic Ellen Page, here playing a tightly-wound cross between Juno and Alex P. Keaton a full decibel lower than her typically piercing air horn delivery.

“Smart People” doesn’t actually have an ending, it just trails off, making vague attempts at closure and clumsily passes out happier futures for all involved. It’s frustrating to witness, as the film certainly feels like it had more to say with these complex characters, only to be gutted by an undefined entity more interested in infuriating brevity than fulfilling storytelling. 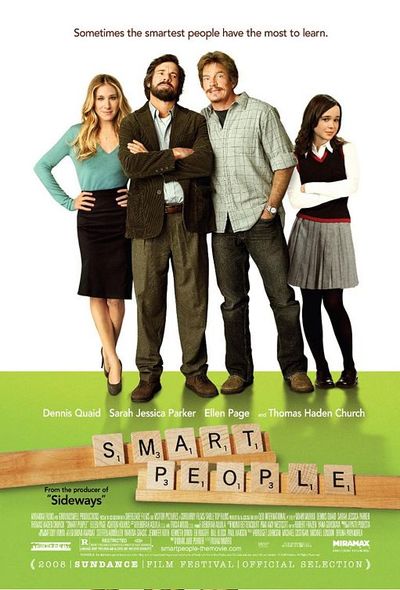 The face that you hate Ellen Page, but go for processed shit like Pirots of the Caribbean proves what a douche supreme you are!