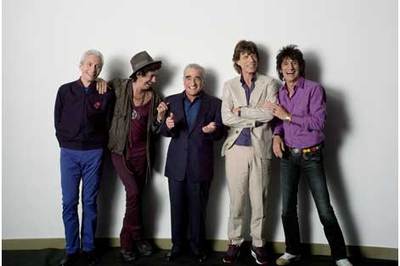 The brain hurts to even consider how The Rolling Stones have managed to stick together for over 45 years. Of course, there’s the legacy of chart-smashing hits, legendary albums, truckloads of cash, and magnetic personalities; still, it’s incredible to see these guys, now in their 60s, jump onstage and still boogie down with the best of them.

“Shine a Light” is a concert film of two Stones performances from 2006. The place was the Beacon Theater in New York City, and the occasion was a fundraiser for climate change with host Bill Clinton. The director is Martin Scorsese, whose own relationship with the music dates back to the earliest moments of his career; in fact, the two entities go hand in hand at this point. Scorsese has an obsession with the Stones, and it’s revealed in every last dizzying moment of this exceptional musical document.

Scorsese’s involvement here is maintaining the blueprint of the show, from the stage design to the battery of cameras arranged throughout the intimate theater ready to capture every inch of the performance. Scorsese is only a character in the film for the opening ten minutes, hustling at full “Marty” speed through preparations and openly nervous about receiving a copy of the set list before time runs out. His thumbprint is all over the picture, simply in the energetic atmosphere created through editing and shot choice. Mick Jagger’s serpentine moves are impressive, but Scorsese’s cameras blow this band up to mythical proportions, lending the group big-screen density and collaborative harmony (especially in IMAX presentations) in the same fashion found in previous concert documentaries, such as 1978’s seminal “The Last Waltz.”

At this point, the Stones are a well-oiled machine, tearing through the hits and catalog obscurities with a precision that could only come from decades of repetition. Perhaps “Light” isn’t the definitive band time capsule, but that doesn’t suggest Jagger, Keith Richards, Ronnie Wood, and the original Silent Bob himself, drummer Charlie Watts, are lacking a full tank of mojo. At its best, “Light” depicts the band in an affectionate, relaxed manner, confidently performing in front of a collection of rabid fans. In fact, things are so comfortable, Richards’s playing sounds incredibly sloppy, yet the grizzled gunslinger is so assured of his hippy charms that it doesn’t really matter. By this time in Stones history, the actual guitar sound is eclipsed by the small community of musicians on stage, and, of course, by Jagger’s tireless prancing.

Mr. Mick is in top form here, busting out all the popular Jagger moves, acting as the ringmaster for the evening. Granted, two solid hours of the man gyrating around the stage can make “Light” feel endless, but the sheer physicality of his presence is hard to discount. Jagger sells every last note as if a grenade was shoved down his pants and he’s shakin’ his booty to stay alive. Some of the best parts of “Light” are when other stars come out to share the stage. The guest list includes Jack White, Buddy Guy, and Christina Aguilera (also, look fast for Bruce Willis in the audience), and they all try to keep up with the sprightly Jagger. Guy succeeds, launching into a house-on-fire version of “Champagne & Reefer” with the band that is incredible to behold. Aguilera’s moment is just as fun, but for reasons that have less to do with her golden throat and more about watching Jagger dry hump the poor woman while she tries to keep her game face on. It looks nearly incestuous.

Of particular interest are snippets of interview footage pulled from over the years, cut into the film as a reminder of history and youthful whimsy. The common question posed to the men is one of future plans and how long they see this band lasting. It’s fascinating (at times, hilarious) to watch the group unable to contemplate playing rock music in their 60s during the 60s, only to fast-forward through the years to reveal Mick and Keith becoming more comfortable with the notion of riding out their popularity for as long as they can.

Personal taste will decide if it’s more satisfying watching the Stones slink around some unusual offerings (“As Tears Go By,” “She Was Hot,” “Just My Imagination”) or come out swinging with the hits (“Sympathy for the Devil,” “Brown Sugar,” “Shattered”). It’s an agreeable mix of the obvious and the experimental, and the crowd laps up every sweaty spoonful. There’s no reason movie theater patrons should feel excluded from the glitzy experience; “Shine a Light” is an infectious marathon of bluesy rock from the men who helped kickstart the genre, and nobody is left out in the cold when the Rolling Stones hit the stage. 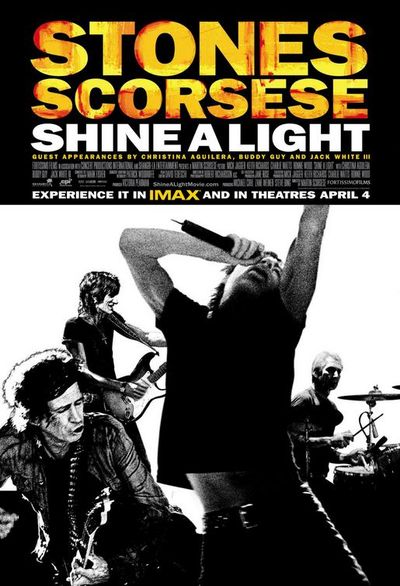