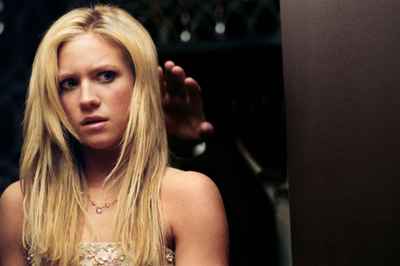 Stop me if you’ve read these ingredients before: a PG-13 horror picture, a remake of an 80’s cult classic, directed by nondescript filmmaker, pathetically kept from critics to avoid unpleasant opening day reviews, and starring a roster of insipid young actors? Surely this means only the finest quality Hollywood has to offer!

After surviving the slaughter of her family three years back, Donna (Brittany Snow, “Hairspray”) has finally managed to secure a happy life, now enjoying the night of her high school prom. As Donna arrives at the hotel with great anticipation, surrounded by her tight circle of friends (including Scott Porter and Jessica Stroup), the evening quickly turns into a game of survival as the killer (Johnathon Schaech) from years before escapes from prison and shows up to the big celebration to finish the job.

The new “Prom Night” has very little in common with the 1980 Jamie Lee Curtis slasher footnote, instead just pilfering the title and the concept of a killing spree at the most important social gathering for the average high school student. The earlier “Prom Night” wasn’t an elegant achievement in suspense, but it’s amazing how much the new production fails to offer the audience in the way of chills. The new “Prom Night” is insistently lifeless, which I think is worse than simply being awful. At least awful has some personality to it.

Charm, pace, and suspense are all in short supply for this brainless remake. Director Nelson McCormick comes from a long history of television work and it shows, for his “Prom Night” is too cautious, too gutless to make a psychological dent; a one-way ticket to dullsville, fueled by absurdly toothless PG-13 fright sequences (boo scares aplenty here) that will make this forgettable one-weekend-wonder a DVD dynamo on the sleepover circuit. I’m sure there’s an audience for implied stabbings, but set loose in the thickly-padded script by prominent genre hack J.S. Cardone (“The Covenant,” “The Forsaken”), and “Prom Night” has nowhere to go but right to sleep.

The cast, led by Snow’s irritatingly teary performance, couldn’t be more vanilla if they tried; along with Schaech, who makes evil about as cinematically enticing as a tax audit. Where’s the fervor for fright in this debacle? McCormick just elongates the whole process, assuming the audience will have a ball watching teen characters natter on about their tedious lives between knifing sequences, or observing actor Idris Elba (here in the concerned cop role) give in to every smell-the-fart acting itch he’s ever dreamed of exploring. It’s rare to come across a film that simply gives up, but “Prom Night” is lazy that that, spending long stretches of the running time accomplishing nothing. It’s just odd.

The finale of the picture should be this grandiose showdown between good and evil, but not on McCormick’s watch. No, he’s likes to make even the simplest acts of behavior last about 900 years, constructing a conclusion that is absent even the slightest blip of tension and conflict. It seems unfair to blame PG-13 standards for the continual gutting of the horror genre, but when a stinker like “Prom Night” shows up to bleed teenagers of their allowance, it’s hard to ignore the warning signs. The defanged slasher movement once again lays a rotten egg.

As a horror fan who was in high school during the glut of R rated slasher movies of the late 70s/early 80s, I rolled my eyes when I found out this movie was rated PG-13. What utter nonsense.

The truly sad thing is that even if they added heaps of blood and gore and a few "F" words here and there, this film still would be redundant trash. J.S. Cardone should leave the buisness whimpering with his tail between his legs. He certainly shouldn't be remaking The Stepfather.

The truly sad thing is that even if they added heaps of blood and gore and a few "F" words here and there, this film still would be redundant trash. J.S. Cardone should leave the buisness whimpering with his tail between his legs. He certainly shouldn't be remaking The Stepfather.