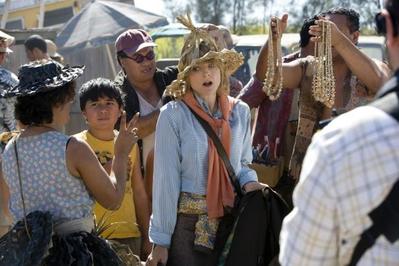 I think it’s wonderful to see Jodie Foster attempt to break out of her cycle of gritted-teeth dramatic roles with a fluffy family comedy. However, the grating “Nim’s Island” is pitched too aggressively, and Foster’s bug-eyed, pratfall-packed performance is embarrassing to witness.

Nim (Abigail Breslin) is an adventurous pre-teen girl, living on an isolated South Pacific island with her scientist father, Jack (Gerard Butler), passing the time reading her favorite books by author Alex Rover. In San Francisco, Alex Rover (Jodie Foster) is an agoraphobic novelist currently stuck on her latest work, e-mailing Jack for information on the local volcano. When Jack finds himself stranded at sea, Nim is left alone on the island to fend for herself against storms and tourists. Fearful, she e-mails her hero Alex to come help her, sending the violently phobic writer out into the big scary world of germs and human interaction with the help of her Indiana Jonesesque literary alter-ego (also played by Butler).

Based on the book by Wendy Orr, “Nim’s Island” is an unruly family film tied to the idea that restless direction and a blaring soundtrack will keep the antsy kids in the audience glued to the screen. What directors Jennifer Flackett and Mark Levin are pursuing with “Island” is a dreamlike quality, where fantasy and reality intermingle on a colorful scale. The filmmaking embraces cartoon qualities by giving Nim animal friends with human characteristics, or the island setting itself, which is a McDonald’s Playland of volcanoes, zip-lines, and Talking Heads dance parties. I can understand the temptation of such material, but Flackett and Levin sell the whimsy of it all with a jackhammer, playing to the rafters any chance they get. They seem more interested in elaborate transition shots and other showoff camera tricks than finding a flexible, working tone for the picture.

The result is a headache-inducing film that grows more obnoxious as it plays, but the most piercing element of the movie is Foster. It’s not that she’s terrible in the frantic role of Alex, but the actress is trying with every fiber of her being to be funny, and bless the multifaceted Foster, but clowning around just isn’t in her DNA. Alex is supposed to be a complete pill, but the squeaky way Foster plays the anxiety is difficult to watch. Flailing about like a puppet, Alex spends the entire picture confronting her fears (a major theme of the picture), but the situations provided by the screenplay consist primarily of Alex horsing around or plugging Progresso Soup and Purell, not really making inroads on her list of uncertainties.

“Island” is really three stories in one, following Nim, Alex, and Jack as they fight separation in their own comical ways, but it never ties together. “Nim’s Island” isn’t dreary, just miscalculated by filmmakers too eager to please and a lead actress much too willing to be the butt of a joke. 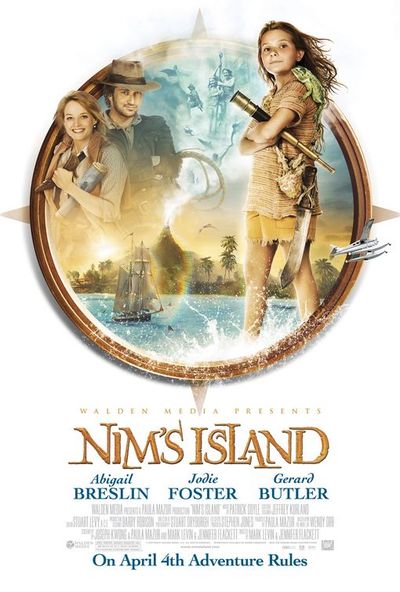 Wow. This is a pretty harsh review for what I thought was a very good movie. It has some very good lessons for young people about courage, independence and caring. I went with two adults and we all enjoyed it. The kids in the audience seemed to be eating it up, too, especially when the animals were involved. I thought all three actors did a great job. In case you hadn't noticed, Jodie's character was SUPPOSED to be neurotic and antsy. Gerry did a great job as both dad and adventurer and Abigail was very convincing as Nim.

Good. It looked like a D+ trailer, so I'm glad no one on the marketing team lied to me.

Suzy, did you actually read the review? Please do so before you leave moronic comments.

Totally agree with the review....Jodie Foster's days as an ingenue are over, she's aging rapidly. She's supposed to "love" the character of Alex, but cannot stand to have Gerard Butler hug or touch her. Draggy movie, with plot holes, (kid being blamed for volcano erupting, solar batteries that are under the palm tree canopy actually working, her ability to climb mountains with a knee so full of infection, it's pus-filled, Dad floats home from the middle of the ocean with pieces of his boat, when we see a camera shot of it under the sea....

This movie, designed for pre-teen girls, will drive them crazy, they're more savvy then that. Hope the "American Girl" movie has more intelligence.