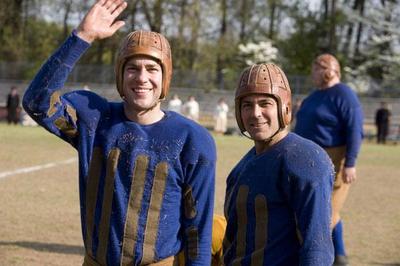 George Clooney has not only proven himself to be one of the most charismatic actors working today, but he’s become something of a versatile director as well. “Leatherheads” is certainly the zaniest film he’s made so far, but it rings a bell of constant delight; Clooney attempts to capture a bygone big-screen mood and gets the job done with mud in his hair, whiskey on his breath, and a goofy grin on his face.

Playing professional football in a post-WWI America, Dodge Connelly (George Clooney) is trying to keep his ragtag team, the Duluth Bulldogs, from going broke. To find instant success and media appeal, Dodge hires college star Carter Rutherford (John Krasinski) to join the squad, bringing with him fast feet and serious war hero credentials. On the Bulldogs’ tail is newspaper reporter Lexie Littleton (an alluringly tart Renee Zellweger), who’s under orders to tear down Carter’s account of battlefield heroics, but finds herself drawn to his boyish charm and Dodge’s boozy sensibilities.

“Leatherheads” is a cross between a classic George Roy Hill picture and something the Coen Brothers would dream up to entertain themselves. Directed by Clooney, the feature is a throwback to the screwball comedies of the 30s, executed with finger-snap timing and photographed with a golden glow befitting a tale of apple-cheeked, black-eyed Americana. Clooney helms with a particular zeal, resembling a kid in a candy store as he gets to play around with eye-bulging slapstick scenarios, lightning-bolt repartee, and comical period set-pieces. Even with a few missteps in the pacing department, “Leatherheads” remains a whole heap of appealing fun.

What I’m positive will surprise potential viewers is how little a part football plays in “Leatherheads.” Clooney doesn’t entirely ignore the gridiron action, having a ball showcasing the sport’s bruiser origins in the cleared woods and cow-populated farmlands of the Midwest; yet, the film is more of a character piece than a sporting comedy, with subplots extending to Carter’s military shame and the hopscotch flirtations between Dodge and Lexie, which eventually trickles down to begrudging admiration.

Of course, all of this is executed with a fizzy bang that Clooney pulls off with a prohibition stupor and some knee-slapping generosity; the man knows how to stage a bar fight and a game of verbal chess with the best of them, inhaling large, billowy cinema-god smoke to craft his own cartwheeling comedy. Just don’t be shocked when there’s not much time given to football theatrics.

The plots collide in the final act when Clooney stages a wild “big game” to balance out the maturation of his characters. Even with all the mayhem of the playing field to keep the film eventful, the screenplay spends some time eulogizing the death of football. With rules soon implemented that steal away the unpredictability and entertainment value of the game, “Leatherheads” underlines the changes football endured to become the passive experience accepted today. It’s a fascinating footnote on an incredibly engaging comedy, showcasing Clooney’s gifts as a comedic actor, not to mention a director in constant pursuit of increasingly cockeyed stories plump with genuine surprise and executed with marvelous visual dexterity. 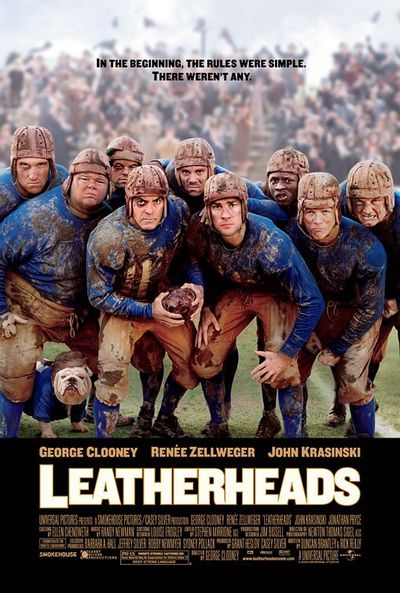