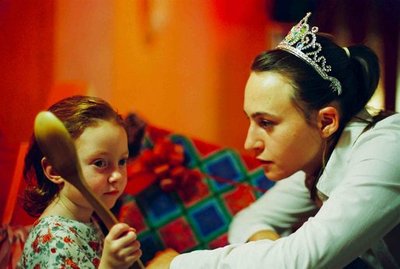 Three stories of love and loss collide into each other in “Jellyfish,” an Israeli production that’s structured much like Paul Haggis’s “Crash,” but executed with whispers and looks, slipping into pure cinema mode for much of its brief running time.

Batya (Sarah Adler) is a withdrawn waitress who finds a young girl (Nicole Leidman) at sea, washed up on shore without parents, leaving Batya as her guardian. The child cracks open the psychological damage inflicted on Batya as she tries to maintain her dreary, colorless life. Keren (Noa Knoller) and Michael (Gera Sandler) are newlyweds looking to salvage their honeymoon after Keren injures her foot, thus cancelling a Caribbean vacation. Filipino caretaker Joy (Ma-nenita De Latorre) is stuck in Israel for work, anxious to return home to her child. Joy is soon hired to care for Malka (Zaharira Harifai), an elderly woman unable to communicate with Joy or interact with her own daughter.

“Jellyfish” is a soothing, meditative piece that never raises its pulse above a slow, steady beat. That’s not a criticism either; after years of watching profound movies reach operatic heights, the collected and peaceful “Jellyfish” is a tender change of pace. The story, written by Shira Geffen (who also co-directs with husband Etgar Keret, writer of “Wristcutters: A Love Story”), is a character study of the pain the clouds our judgment and holds us back from joy, explored through these stagnant and argumentative characters; however, “Jellyfish” never explodes.

Geffen and Keret maintain a curious distance from the drama, preferring to allow this world some space to work out communication failures and misfortune. Three stories make up the narrative spine, but they all blend into each other, often thematically, but also quite literally. The pace is the one element that suffers here, with long stretches of “Jellyfish” perhaps too occupied with navel-gazing, but the overall dreamlike quality of the filmmaking saves several subplots from dramatic disintegration.

The filmmakers are sympathetic to their characters, and the restraint has a reward of unique audience comprehension. A film of miniature treasures, “Jellyfish” connects on intimate levels: the jealousy of Keren, Joy’s sadness, and Batya’s delirium. They unite to form a string of multi-layered ideas on parenthood and survey issues of trust, sold with vivid water-centric locations around Tel Aviv. It’s thought-provoking material from Geffen, who writes with confidence and directs with eagerness. Again, “Jellyfish” is a lyrical picture, not forceful. Give it some time, and it’s almost sure to get under your skin. 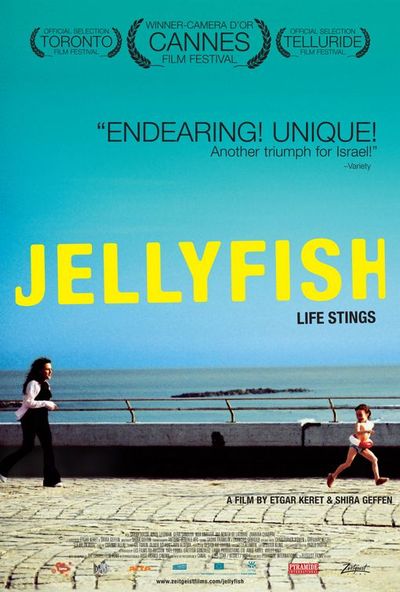 great review. i thought this movie was deep and poetic.

what did the old man at the end symbolize? what's the overall message of movie?

what does batya learn from the little ocean girl? the bride from the writer?

was the writer meant to be ophelia-- destined to be with keren's groom?

i found the women to women relationships to be very strong and powerful. also the characters who couldn't take care of themselves or connect with their own family but managed to take care of strangers (the nurse can't care for her son but cares for another person's mother,etc.)