Home Archives Profile Subscribe
DVD Review: One, Two, Many
Film Review: The Life Before Her Eyes

Film Review: Jack and Jill vs. the World 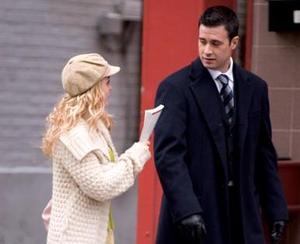 “Jack and Jill vs. the World” is teeming with infuriating cinematic qualities. On the surface, it’s an easy film to loathe, yet on closer inspection writer/director Vanessa Parise has managed to establish some interesting emotional corners in this otherwise bubblegum diversion, the least of which is getting Freddie Prinze Jr. to act like an adult for once.

Jack (Freddie Prinze Jr.) is an advertising man stuck in routine and a slave to New York yuppie values. One day he stumbles upon Jill (Taryn Manning), a naive young woman who delights in her big city surroundings. Offering her work, Jack takes a special shine to Jill, and is quick to offer her a room in his apartment. Jill is touched by his kindness, and the two quickly embark on a romantic relationship based on a list of rules that Jill demands be obeyed. Jack, finding his world turned upside down by Jill’s spirit, is troubled when his new love is evasive about her life. Dealing with Cystic Fibrosis, Jill is frightened to come clean to Jack, terrified to call attention to her infirmity and return to a pathway of pity.

Perhaps the aim of “Jack and Jill” is to disarm the audience by heading down a CW-pilot road filled with glamorous New York locations, quirky supporting characters, and a multitude of bubbly musical montages; the picture is riddled with hokey moments, elaborately building itself up as a common rom-com of warring, yet loving opposites. Maybe Parise was too skittish of confronting delicate relationship faults in a more blunt manner, but once the sugar is scraped off the material, there are some terrific bits of frustration and terrifying medical limitations to explore that sneak a little bravery into the proceedings, along with some badly needed dramatic weight.

Cystic Fibrosis is not an ailment that’s discussed on the big screen often, making “Jack and Jill” something of a rarity. Even better, the picture strikes a nice balance between hope and doubt as Jill strives to live a life without the inspection of others, but is unable to disregard her medical history for long. While hardly a bulky drama, “Jack and Jill” still offers scenes of believable aggravation that welcomingly counter the fluff.

Parise’s greatest miracle is pulling out acceptable performances from Prinze Jr. and Manning. Two performers known primarily for repeating themselves, the actors receive a welcome opportunity to play against type. While the embittered New Yorker routine wears thin on Prinze Jr., Manning slips in a lovely performance that permits the gloomy actress some sun and glamour. Manning also warmly humanizes the CF elements of the character, keeping the film free from depressing hospital-room claustrophobia.

“Jack and Jill vs. the World” is a difficult film to figure out. There’s an overwhelming and quite repellent amount of gloss applied to the finished product, yet underneath it all are many scenes of honest emotional confession, distributed through wonderful atypical performances. Perhaps the film is for the more patient filmgoer: one who can last through 100 awful pop music montages to get to the heart of it all. 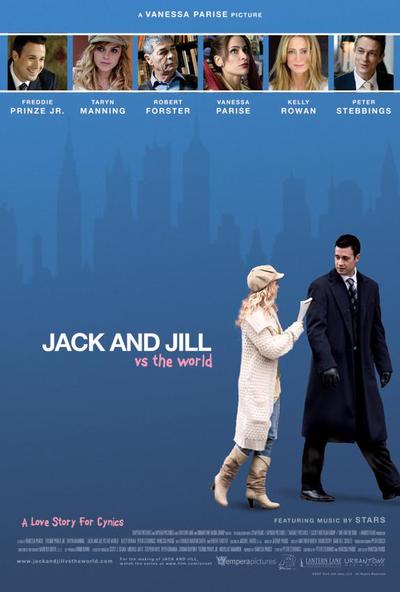