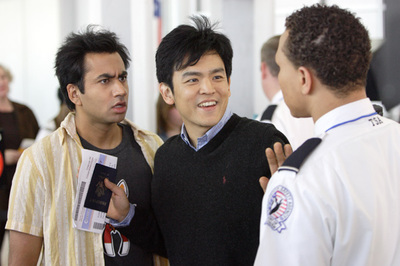 Right from the start I’m stating that I detested this needless “Harold & Kumar” sequel. However, I’m well aware that it will absolutely delight the franchise’s core group of fans, so please, for the love of all that’s holy, do not step an inch further in this review if you cherished “Harold & Kumar Go to White Castle.”

Off on a special trip to Amsterdam to chase after a loved one, Harold (John Cho) and Kumar (Kal Penn) board a plane and settle in for the nice, long trip. Impatient, Kumar whips out his smokeless bong in the bathroom, which onboard security mistakes for a bomb and swiftly arrests the duo on severe terrorism charges. Sent to Guantanamo Bay by nightmarish government agent Ron Fox (Rob Corddry), the duo manage to escape quickly, only to find help in America scarce as they creep along the backwoods of the country getting into all sorts of scrapes and racially-charged situations.

I’d assumed I would never have to write this, but I miss the confident directorial touch of the guy who made “Dude, Where’s My Car?” The reigns of “Guantanamo Bay” have been passed down to the writers of “White Castle,” Jon Hurwitz and Hayden Schlossberg, and the transition is a sloppy one. I wasn’t too enamored with “White Castle,” but it had some faint charms and the good sense to quit while it was ahead. “Guantanamo Bay” is nonstop procession of grim material, hinged on the sweaty prayer that the target demo will be too high to notice they’re being fed nearly the exact same jokes.

Remember how awesome it was to see Neil Patrick Harris as himself, only himself with raging substance abuse problems and a penchant for risky sex? How funny Kumar’s anthropomorphic bag of weed love interest was? Well, they’re back in “Guantanamo Bay,” along with a horde of conventional pot jokes and shock value nonsense that’s marinated in desperation. Hurwitz and Schlossberg don’t actually have a story for their sequel, so they bury the material in disorganized ideas, one of the larger ones concerning some swipes at Bush’s America and the overzealous, clueless means of patriotic defense after 9/11. Coming so soon after Jenna Jameson’s left-hook “Zombie Strippers!,” “Guantanamo Bay” is another silly comedy that attempts to sneak in big-boy political ideas about governmental corruption under the guise of oral sex jokes and Corddry’s obnoxious performance, which is so frantic and unfunny, it’s nearly mime-like in execution.

The other unfriendly angle of “Guantanamo Bay” is the picture’s slathering of racial humor. I realize the jokes are meant to be harmless by their obvious pronunciation, but it doesn’t take long for the bits to wear down the intended joviality of the film. The directors are looking to flabbergast with sight gags like Fox using grape soda to make an African-American suspect talk, or spilling a bag of pennies to make two Jewish characters sweat during an interrogation; it all comes off as childish, even for a juvenile film like this. I always thought the idea of a sequel was to try and top the original film, but “Guantanamo Bay” is even more careless than “White Castle.”

The rest of the film is the stuff one would expect walking into a “Harold & Kumar” sequel: gratuitous nudity (the pair stumble upon a “bottomless” party), over-explained jokes, massive ADR sweetening of humor, Penn and Cho further developing their comedic infertility, and lots of tiresome gay panic situations. What’s less expected is an extended riff with a makeup-enhanced George Bush lookalike; a gag that would’ve been better sold if the actor looked less like Freddy Kruger and more like the President. You can add it to the alarming pile of misfired satire left to rot in the sun by the filmmakers.

Of course, getting upset with “Guantanamo Bay” is fruitless, since most fans couldn’t care less about actual scripted quality as long as Kumar passes gas at inopportune times, Harris downs a mouthful of mushrooms and rides a unicorn, and the occasional joint is worked over. If I laughed a handful of times during “White Castle,” I found myself without a single solitary chuckle during this painfully slapdash and uninspired sequel. 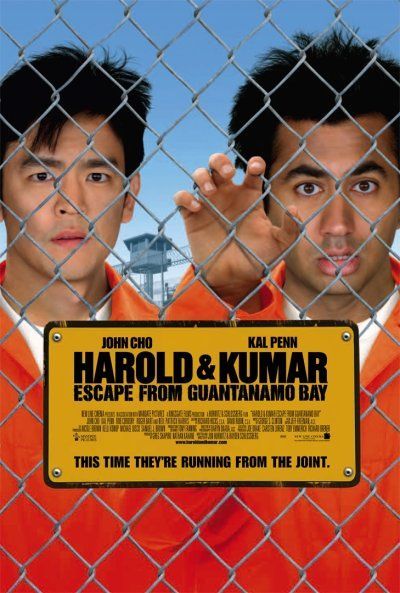 This one's getting some surprisingly mild rebukes -- and some praise. At first blush, this is the kind of film 99.8 percent of critics usually detest ... thoughts?