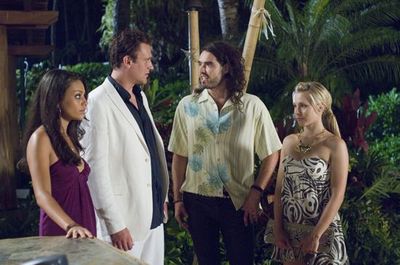 For some, the Apatowing of American comedy has perhaps lost its luster through repetition. For others (and this would be me), the unwashed comedic sensibility of the Apatow family is a godsend, and “Forgetting Sarah Marshall” is another barnstorming success, flush with peculiar performances, a frothy stream of vulgarity, and a universal tale of brokenhearted loathing that’s sure to make it the finest awkward date movie of the year.

A television composer, Peter (Jason Segel) is happily dating small-screen superstar Sarah Marshall (Kristen Bell). When she leaves him for rock star Aldous Snow (Russell Brand), Peter is torn apart, lost without the comfort of his girlfriend. Trying to clear his senses and find his center, Peter takes a trip to Hawaii, only to find Sarah and Aldous on vacation at the same resort. Now even more miserable, Peter finds peaceful energy with fetching hotel employee Rachel (Mila Kunis), which leaves Sarah in a jealous rage, soon questioning her own slapdash relationship.

Truthfully, Judd Apatow only produces “Sarah Marshall.” However, the man’s fingerprints are all over the material, written by Segel and directed by Nicholas Stoller, executed in the same freewheeling, semi-improvisational format that informed “40-Year-Old Virgin” and “Knocked Up.”

The beauty of “Forgetting” has to be that it’s a decidedly angry film about relationships that strives to misdirect the audience into thinking it could be something more saccharine and cutesy. Granted, the film eventually wields cupid’s arrow, but the rest of the picture is a supremely toxic expression of breakup rage and hatred for the ex. Credit Segel’s disarmingly feral screenplay, which has a blast toying with audience expectations while picking away at some genuine moments of disgust and self-loathing. The laughs here are quickly chased by sympathetic stomach cramps.

As with other Apatow-approved endeavors, casting is the key. The ensemble here is terrific and startling, especially Kunis, who after spending nearly a decade on the shrill “That 70’s Show,” reveals a newly freshened allure as Peter’s rebound girl, who also happens to be the best antidote for him in his time of need. Kunis is funny and utterly lovable, and holds her own against Segel, who obviously caters the screenplay to his strengths of punching-bag straight man comedy and bursts of full-frontal nudity. Brand and Bell make for fun adversaries, though both take some time to warm up to the speed of the material.

It also wouldn’t be a party without plenty of guests, and appearances by Bill Hader, Jonah Hill, Carla Gallo, and Paul Rudd as a sun-baked surf instructor add their special sauce to the mix. Even William Baldwin pops up as the co-star on Sarah’s awful “C.S.I.” rip-off crime show, channeling reptilian Carusoesque pausing like a heavyweight champ.

Segel’s gift is making weird situations bleed into the uncomfortable, and “Forgetting” is ripe with sequences that dive off the deep end of absurdity, yet still remain a plausible gas. Peter’s ambition to write a rock opera about Dracula (performed by puppets) is a perfect example of how Segel boldly walks this thin line throughout the picture, yet his comfort with ludicrousness is where the film is most confident and uproarious. It’s a corrosive feature, with Peter slowing coming to the realization that Sarah is Satan incarnate, and the material rides that perfect razor’s edge between humanity and throat-slicing comedy, never pausing for comfort.

“Forgetting Sarah Marshall” is non-stop laughs in both the obvious and the sneaky material stuffed into the corners of the film. It’s a firecracker of a picture, paying tribute to stomped hearts everywhere, not to mention throwing valentines toward the Muppets, luscious Hawaii, and the comedic value of the penis. 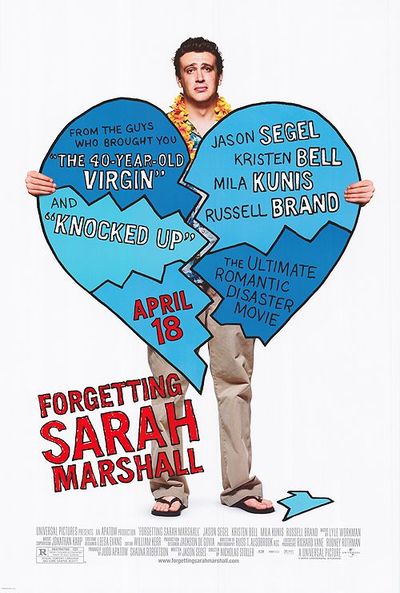 I couldn't agree with you more. Who would've thought that full-frontal (male) nudity would get so many laughs out of me?