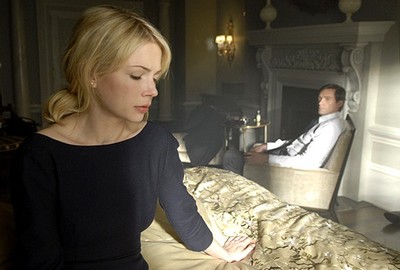 When meek accountant Jonathan (Ewan McGregor) meets slick attorney Wyatt (Hugh Jackman), he’s immediately smitten with Wyatt’s style, wit, and sophistication. The two quickly become friends, with Wyatt introducing Jonathan to the world of an anonymous sex club and assorted debauchery. In this haze of pleasure, Jonathan meets the mysterious S (Michelle Williams) and immediately becomes consumed with her every move. Overwhelmed and now trapped in a net of suspicion from the local police once dead bodies start piling up, Jonathan must fight for his life when Wyatt turns out to be far more dangerous than he ever expected.

“Deception” had me for exactly 40 minutes. Playing in a lurid sandbox once manipulated to memorable results by such filmmakers as Adrian Lyne, the picture sets itself up as a sexual odyssey, where Jonathan quickly gets in over his head trying to play by Wyatt’s hazardous standards. The performances comply to the overall slither, and both Jackman and McGregor appear to enjoy their time basking in the glow of the red light district. It isn’t a grip-the-armrest, cross-the-legs-slowly type of escapism, but “Deception” was achieving small goals in the first act, toying with the audience with flashes of lust and corporate stooge male bonding. After that? Poof. The film turns to dust.

I don’t know where the production found director Marcel Langenegger, but they can put him right back. A lackluster visual stylist and even worse storyteller, Langenegger simply gives up midway through the film, relying on the charms of the actors to see “Deception” to its puzzling conclusion. Perhaps the director isn’t fully to blame here, since the feature has obviously been edited to bits, with basic comprehension and clumps of logic booted out of the proceedings once the heavy breathing is tempered.

Again, once the sexual twitch of the film has been relieved, “Deception” grows increasingly tiresome as the plot switches from braless mystery to violent manipulation. It all becomes a familiar checklist of twists and turns, with nothing left in the film to care about. In short, “Deception” becomes impossibly dull, and no amount of Ewan McGregor hilariously trotting around with a ghastly American accent can save the film from sinking into sleepy routine.

We’ve been here before, most pointedly in 1990’s “Bad Influence.” “Deception” has nothing innovative to offer the screen, so the experience of watching wonderful actors slum through dreadful material and nonexistent direction is disheartening, and frankly there’s nothing sadder in the world than to watch a sex-laden film unable to climax properly.