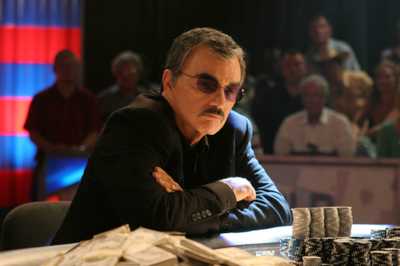 Poker has been dealt some terrific cinematic hands before, but “Deal” is hardly cinematic. It feels like it would be more at home on the small screen, where the curious lack of energy running through this picture wouldn’t seem quite as severe, “Deal” is a passable diversion for poker junkies, but I fear will hold little interest for anyone not enthralled by gambling.

A poker prodigy at age 21, Alex (Bret Harrison) has trained himself with online tournaments and dorm room games. Now vying for a shot on the professional poker circuit, Alex piques the interest of former gambler Tommy (Burt Reynolds), who takes the young man under his wing and teaches him the details of the game. Ready for his shot, Alex heads to the World Poker Tour tournament in Las Vegas to match skills with the best of the best. However, ego and mistrust rear their ugly heads, leaving the partnership strained and futures uncertain with a multi-million-dollar jackpot on the line.

“Deal” is a film of limited ambition, yet I think someone forgot to explain that to director/co-writer Gil Cates Jr. Intoxicated by the recent chess-like romanticism of poker, Cates Jr. directs with an aim to be cutting edge, often abusing commonplace editing techniques, blasting whiny emo rock leftovers, and idolizing the nightlife of Las Vegas with all the visual invention of a Travel Channel special. He’s sweating hard to make “Deal” feel electric and edgy, at the same time filling up his screenplay with hoary scenarios of conflict and redemption that keep the whole affair thoroughly sedated.

It’s difficult to tell if poker maniacs will dig into what “Deal” has to offer, but the film appears to get the surface details of the game right. It’s a familiar road of tells, bluffing, and bravado, but “Deal” does settle into a passable atmosphere of high-tension gambling, using WPT iconography for street cred and the likes of Jennifer Tilly to cameo, lending the picture a reality the rest of the film is sorely lacking. Perhaps Cates Jr. is ultimately more fascinated with the bright lights of competition than the mechanics of the game, but when “Deal” focuses on the cards and chips, the film’s nagging problems melt away.

The mere presence of Burt Reynolds often offers a mixed bag of production quality reactions; however, he’s the best thing to happen to “Deal.” Sure his hair looks like a tennis ball and the man’s face is pulled tighter than the villains of “Star Trek: Insurrection,” but he’s the only one in the cast with Hollywood-bred gravitas, making Tommy far more complicated (and therefore compelling) than Cates Jr. could have ever dreamt of. It’s a sharp performance of concentration and star-powered snap, and he burns his co-stars off the screen; leaving me to wonder why the production even bothered with the Alex arc, since Tommy and his troubled road back to the limelight is sturdy enough for its own movie.

“Deal” is confused when separated from the comfort of the green felt, piling on way too many clichés. As a poker diversion, it should pass the time, but if you’re hoping for a dramatically rewarding piece of filmmaking, your odds are better with a different movie. 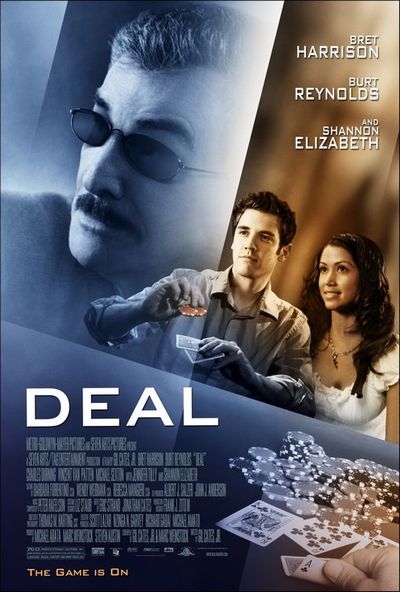