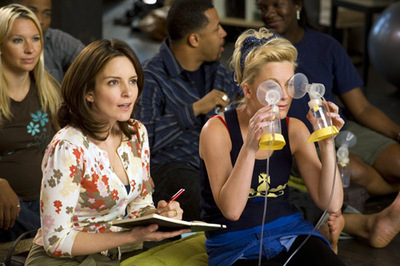 If there’s one thing to be learned from the “Baby Mama” experience, it’s that Tina Fey is a movie star. Effortlessly charming and genuine in front of a camera, she carries the film with a special poise in this, her first starring role. The rest of the movie can’t possibly keep up with her, and often doesn’t even try.

Kate (Tina Fey) is a business woman trying to pull together the opening of an organic food store and fulfill her lifelong wish to have a baby. With her own reproductive system in disarray, Kate turns to a surrogate named Angie (Amy Poehler) for help. A trashy, childlike imp, Angie is the exact opposite of Kate, which horrifies the eager mom-to-be. As the pregnancy starts to ramp up, the two bond in unique ways, starting a friendship that is put to the test when Kate finds an unexpected romance (Greg Kinnear) and Angie reveals a demoralizing secret.

I laughed a lot at “Baby Mama,” because, really, how could I not? With two of today’s brightest comedy stars firmly planted in the lead roles, the picture is assured at least some level of hilarity, and writer/director Michael McCullers is wise to step aside and let the ladies lead the laughs with ideal execution and friendly interaction.

The plot is strong enough to let the actresses play around with their broad opposite roles, with Fey getting the uptight neat freak end of the stick and Poehler playing dumb, or at least unmotivated. These are two wonderful performances that drip with comedic chemistry, bolstered by some fine additions of absurdity and improvisation into the film. Clearly these two are comfortable working together (the years of “SNL” camaraderie show) and remain the bright spots of the movie, which, towards the midsection, doesn’t need any melodrama to remain a successful and fluffy charmer. However, McCullers disagrees.

With paternity issues creeping into the plot, along with a cold fish romance between Fey and Kinnear, “Mama” starts to slow down, padding itself with dramatic nonsense to get the film to a contractual running time. This is McCullers’s first feature directing gig, which shows when film drops dead in the final act, looking for a heart when all it needed was a laugh. The performances stand their ground, but the film quickly becomes labored and needlessly complex, letting the jokes disappear while McCullers robotically tries to pluck heartstrings. Syrupy sentiment and Fey just aren’t an easygoing couple yet.

“Baby Mama” is a funny comedy and absolute catnip for those in the market for a child of their own. I liked its spirit and occasional desire to treat stupidity as a gift, not a crutch. It’s not a perfect film by any means, but as a debutante ball for Fey and Poehler as big screen leading ladies, it’s a dream. Hopefully these two are embarking on a long career as a comedy pair. “Baby Mama” would be nothing without them.