That “88 Minutes” is a cruddy, silly thriller is nothing remotely shocking; the genre has been laying eggs for decades. How Al Pacino found himself roped into this wacky movie is another mystery entirely and one that doesn’t take much research past the words “yacht payment” to solve.

College professor and forensic psychiatrist Jack Gramm (Al Pacino) has lost his way in a fog of meaningless sexual encounters and bottled grief over the murder of his little sister years ago. After successfully putting serial killer Jon Forster (Neal McDonough) behind bars on questionable evidence, Gramm is riding high as the day of execution has finally arrived. Going about his business, Gramm is notified by cell phone that he has 88 minutes left to live. At first confused, but soon aware of certain danger, Gramm, with the help his students (including Alicia Witt, Leelee Sobieski, and Benjamin McKenzie), attempts to track down the mysterious aggressor while barely surviving several attempts on his life.

Pacino has been involved with some real dogs over the years, but the desperation of “88 Minutes” is quite amazing. Even with a semi-respected director like Jon Avnet (“Fried Green Tomatoes”) calling the shots, the picture is toothless thrill ride, using the iffy concept of “real time” cinema to manufacture some suspense, because the screenplay certainly doesn’t have a creative bone in its body.

Written by Gary Scott Thompson, “88 Minutes” isn’t about clichés, it’s about stupidity. The picture seems written to fit a wacky design of suspense in Thompson’s head, leaping eagerly over any sort of basic logic. Characters act like they’re from another planet, subplots do the hokey pokey in and out of the movie, and there’s a strange undercurrent of sexual tension running throughout the picture, aimed directly at Jack. Who am I to discourage the appeal of a leathery sexagenarian, especially one with wildly teased hair that makes him look like the bass player for a Dokken cover band, but there’s a time for sexual come-ons and then there’s this movie, where Alicia Witt’s character begins to disrobe and toss around her strawberry appeal right in the middle of Jack’s feverish 88-minute death sentence.

Avent can only hold on for dear life, trying his best to sell the ridiculous scripted turns and performances; still, the entire film has the feeling of a director that knows the ship is sinking. Even by broad pay-cable thriller standards, “88 Minutes” just isn’t interestingly constructed, pouring an ocean of red herrings into the mix to keep the audience guessing, withholding a reason to bother figuring this mess out in the first place. It’s lazy and boneheaded, clinging to the gimmick of the countdown to help it slip past amazing plot holes, obvious casting (would you believe William Forsythe as a tough cop?), and strange ideas of misdirection.

Obviously Pacino will survive this stinker, and I will admit that his voracious “Pacinoisms” boost the movie’s minuscule entertainment factor. Even half-asleep the man remains a compelling screen presence, and it’s fun to watch him tolerate the acting of co-stars such as Witt and Sobieski while mentally counting down the days until principal photography wraps. Hey, we all have money to make, so who can blame Pacino for occasionally tossing away every shred of his credibility and hitching his legacy up to a mindless, asinine diversion. Perhaps he thought, and rightfully so, that something this slapdash and laughable would never see the light of day. 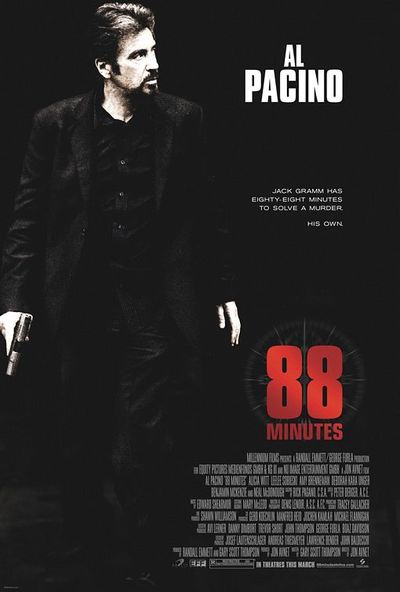