I Believe Harvey Dent Needs a GPS for His Dentmobile 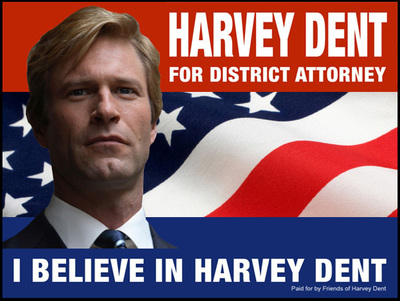 There are times when it’s painfully clear that precious drops of life are being wasted, and I experienced one of these moments on March 15th, when I spent the better part of a day blindly chasing around the “Dentmobile,” sent to Phoenix to promote the upcoming Batman sequel, “The Dark Knight.”

Harvey Dent? Well, he’s running for District Attorney to save a beleaguered Gotham City, and the man needs our help. Badly. Played by actor Aaron Eckhart in the movie, Dent is the other square-jawed face of justice in this Batman world, but he’s probably better known as the grotesque villain “Two-Face,” who, if rumor holds out, shows up in “Dark Knight” as a taste of what ails Batman in the proposed third film.

“Dark Knight” has been running a clever viral marketing campaign for the last year, relying on the fever of fanboys to spread word about the film, asking them to partake in puzzles, some of which have required citywide skills to solve. It’s a neat way to go about business, bringing the audience directly into the line of marketing fire instead of the usual empty-calorie preaching. Granted, it’s not groundbreaking, but this is the first film where I’ve seen the efforts work to build anticipation, instead of dismantling interest with insular gibberish (I’m looking your way “Cloverfield”).

This tour sounded like a superb way to bring the elusive Gotham City to the masses, so I dialed up ibelieveinharveydent.com, scribbled down the local stops for the Dentmobile, and drove up to Scottsdale to pay the future D.A. a visit. Last year, I stopped by the “Transformers” truck tour, which was a highly-themed endeavor with bad actors, film trailers, free merchandise, and as much spectacle as a parked semi allows for. I just assumed the Dentmobile would follow the same template, only with a Harvey Dent lookalike making patriotic speeches, greasy street-team volunteers creating a ruckus, and a fat guy squeezed into a Joker outfit popping up at a precise moment to piss all over the show.

Yeah, so this Dentmobile business is not that interesting.

First of all, and perhaps this was classic Arizona fortune coming into play, good luck even finding the damn thing. The Dentmobile was scheduled to make three stops in Scottsdale this day, and I spent the first two time periods walking and driving around like a moron hoping just to witness the commotion, much less partake in it. No dice.

However, I did spot some folks dressed up in Harvey Dent t-shirts, along with a group of pre-teen girls waving campaign signs and giggling. When I asked these training-bra boosters where the elusive Dentmobile was (since it wasn’t anywhere near the scheduled stop on the website), I received the debut of a phrase I would hear 1,000 more times that day: “I dunno.” 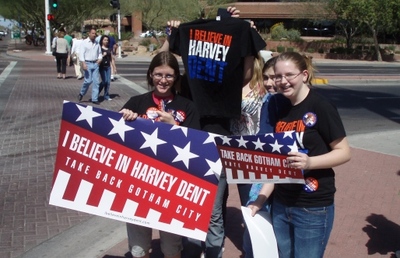 Nobody could tell me where the damn mobile was parked. After wandering around downtown Scottsdale for an hour – no easy feat during a sweaty, tourist-thick Saturday afternoon – I gave up and decided to catch the Dentmobile at the second location: the wickedly popular Scottsdale Fashion Square Mall. Because I can be a total maroon with minimal effort, I spent another two hours of my life questing to find this rolling marketing machine along the various daredevil parking lots and crowded side streets. Again, no luck.

Finally, I was at the point where I could give up and have nothing to show for my effort, or kill an hour at Target staring at bizarre Easter candy and wait patiently for the final stop on the tour. Because I love my readers, I took the bullet and traveled further north to burn out the time before the Dentmobile was to show.

The final stand was made at a mini-golf paradise called “Fiddlesticks,” where I sat in my car desperately trying not fall alseep. To my great relief, other people started to appear for the Dentmobile. Surely this thing had to arrive now! 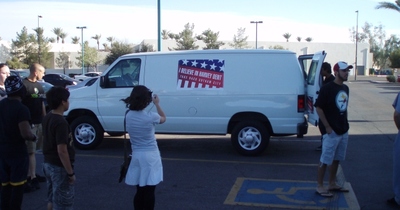 Scheduled for 4pm, an average white van with a few Harvey Dent campaign posters taped sloppily on it strolled tentatively into the parking lot…at 4:45. Where was the fanfare? The excitement? The goddamn joy? Nope. Just a lowly, spare “1974 kidnapper-style” van adorned with a good four seconds worth of decorative thought. Out of this monstrosity stumbled two pooped teenagers with awful trendy haircuts, generating all the enthusiasm one might find at a funeral for a puppy.

The two chump kids spent ten brief minutes passing out tons of Ebayable merchandise to the 30 or so “citizens” gathered, and glumly tried to drum up interest to register for “campaign information” (coming soon to a spam folder near you). It wasn’t much of a show, but people seemed tickled with the results. Funny how a t-shirt and some stickers erase the bitterness of spending an entire afternoon chasing after the most lackluster promotional execution I’ve seen in a long time. 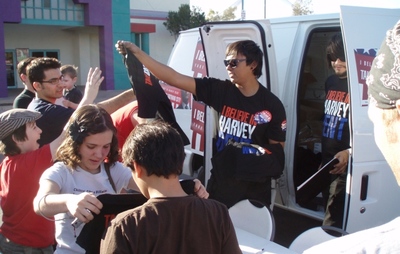 And here’s the kicker: no XL t-shirts for the masses. If you’re a major Hollywood studio trying to appeal to a comic-book-based demographic, make sure you have enough XL shirts to go around. A laughable amount is ideal. That’s day-one stuff, people. What’s a 300-pound man with a Joker tattoo on his neck going to do with a medium? 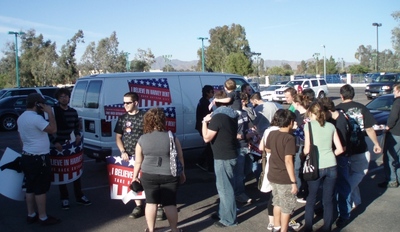 WHERE CAN I BUY ONE OF THOSE "I BELIEVE IN HARVEY DENT" TSHIRTS??!!!