Film Review: Under the Same Moon It almost feels like slapping a nun to find “Under the Same Moon” distasteful, but this eye-rolling tear-jerker pushes enough social-issue buttons to make any viewer mentally check out 10 minutes in.

Rosario (Kate del Castillo, the only warmth in this thing) is an illegal immigrant from Mexico working in Los Angeles, but racked with guilt over leaving her young son Carlitos (Adrian Alonso) behind at home. Gone for four years, Carlitos is having trouble remembering his mother, hoping to cross over to America one day to find her. When his grandmother (and sole guardian) dies, Carlitos seizes his chance and catches a ride with human smugglers (including America Ferrera) over the border to America, where he, a naive 10 year-old, must deal with the new land, helped, of course, by fellow sympathetic illegals who find the boy’s story unbelievable.

The knee-jerk response to “Moon” is to scoff at its politics. This is not a film that merely uses the troubling issue of unlawful Mexican immigration as a plot device; “Moon” sermonizes on the issue by including bizarre soundtrack cuts (one song posits Superman as the ultimate illegal immigrant, only getting a free pass from criticism because of his white skin) and treating nearly all the Caucasian characters as horrible WASPy monsters who delight in tormenting their Mexican workers. This is hot-potato material, smeared across the screen immaturely by director Patricia Riggen, who’s free to make a picture about the dangers of border jumping, but the lack of intelligence and depth on display in “Moon” is maddening.

Of course, none of this would be an issue if the film clicked on the elementary heart-tugging level it wants so dearly to engage on. “Moon” is a shamelessly sentimental tale of motherly love, yet Riggen isn’t an assertive enough filmmaker to earn sniffles and smiles. She squirts the syrup on thick, encouraging her cast to make pouty faces for her camera, just in case someone in the audience doesn’t know how to react to a moment of sorrow. Her direction of young Alonso is the picture’s lowest point, pushing the boy to invest deeper in his highly-trained plastic responses instead of exploring emotional insecurity and building a genuine character out of Carlitos. He’s a well-programmed puppet, wielded like a cannon at a gun fight.

There’s little doubt that the gushy brushstrokes “Moon” paints with will find a receptive audience, but I wasn’t having any of it. I don’t believe it’s the bloodied hand of cynicism either; just a natural response to clumsy filmmaking at its most pandering and unfairly exclusionary. 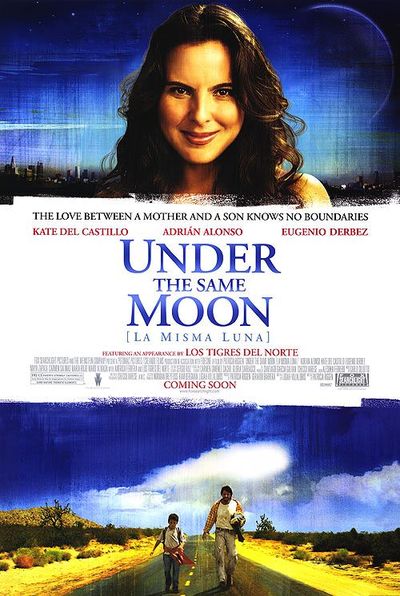