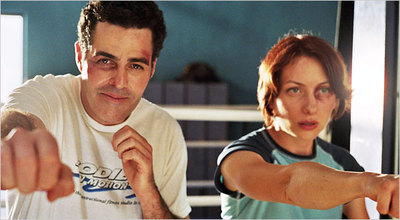 “The Hammer” reminded me quite a bit of Artie Lange’s “Beer League;” the overall feeling being that to best appreciate the charms of the picture, it helps to be able to stomach the star of the show. Adam Carolla isn’t everyone’s cup of tea, but the man can sling around an acidic one-liner with the best of them, and his starring debut is a familiar, but persuasively funny brew of clichés and belly laughs.

40 years-old and fired from his construction job, Jerry (Adam Carolla) is looking for a change of luck. A former amateur boxer, Jerry finds himself drawn back into the ring with aspirations of joining the Olympic team. With his trusty sidekick Oswaldo (Oswaldo Castillo) and a new love interest in his life (Heather Juergensen), Jerry hopes to reverse his fortune by fighting opponents half his age. When he starts racking up victories, Jerry begins to see an actual result from his hard labor, only to find that those who have included him on the boxing circuit didn’t actually believe he could accomplish anything.

There’s really no middle ground to be comforted with here: either you find the nasally, caustic mind of Adam Carolla funny or you don’t. “The Hammer,” born from a story by Carolla, is swathed in the comedian’s arch sense of humor, though it’s more sensitive than the star’s primitive “Man Show” past ever hinted at.

Credit most of this softening to director Charles Herman-Wurmfeld, who is obviously working with a five-dollar budget here, but remains quite successful setting a low-tech tone for “Hammer” that’s cordial enough to support Carolla’s distinct shtick. With the repellent “Legally Blonde 2” and “Kissing Jessica Stein” in his back pocket, it’s a pleasure to see the filmmaker much more relaxed this time out, permitting the jokes a chance to sink in and allowing Carolla space for his signature timing. This is not a glossy feature film, yet Herman-Wurmfeld sets a friendly tone that embraces the charisma of the actors without the need for excessive polish.

The “Hammer” story is nothing to write home about, and often uses eye-rolling cliché to piece itself into an actual, sellable movie. Watching Carolla be Carolla in the film is enough, but there are hard to swallow dramatic requirements that need attending to, especially with a lead who’s pretty much based an entire career around not being taken seriously. “Hammer” is considerably more confident as a light comedy, with Jerry facing obstacles left and right that prevent him from being respected in the ring and in life. The film is comfortable there, and that ease allows for rich situations of comedy to flourish, especially in the hilarious interplay between Jerry and Oswaldo, and Jerry’s insistence on asserting his knowledge of construction minutiae wherever he can.

“Hammer” is a solid leading-man debut for Carolla, and his personality carries the picture a long way. I’m not quite convinced I’m ready to see him emote like Brando just yet, but he can surely light up a film with his acerbic wit and cockeyed perspective. 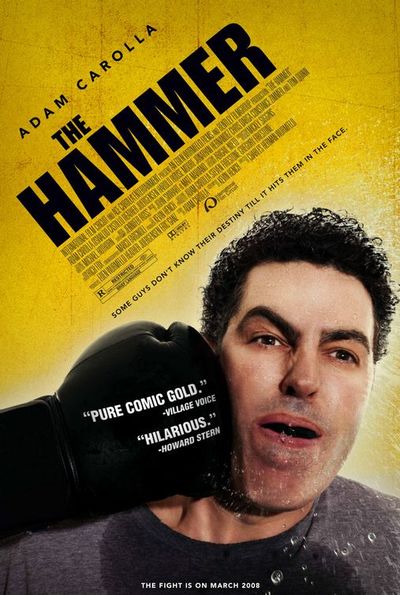 I'm glad to hear it's not an embarrassment. I used to listen to Adam Carolla a lot on Loveline with Dr. Drew Pinsky on the radio back in the late 90s, early 2000s, and he was completely hilarious. I also thought The Man Show with Adam and Jimmy was great, but Loveline is where Adam really made an impression on me. You're absolutely right that he isn't for everyone, but I'm glad to hear that this movie is actually watchable. I saw the trailer a month ago and I was worried because it seemed like he just didn't fit as a leading man, but it's nice to know that his personality shines through. I'll definitely check this out.

Can't wait to see this. I'm very glad to see it's getting good reviews. Adam Corolla is the funniest and wittiest dude on radio - no one has ever been able to match him on Loveline...if his smart and off-center humor works in movies I hope there are many more to come.