No matter what the behind-the-scenes politics involved, it’s taken filmmaker Kimberly Peirce nine years to come up with something to follow her 1999 near-masterpiece, “Boys Don’t Cry.” Maybe her vision rusted shut or inflammable passions on the Iraq War clouded her judgment, but “Stop-Loss” is a miscalculated heap of screwy intentions, abysmal acting, and crudely-realized sermonizing.

While stationed in Iraq, Sgt. Brandon King (Ryan Phillippe) watched in horror as his friends were killed by militants and the country he was fighting to stabilize refused to cooperate with the U.S.’s noble objective. Now finally free of his military duty, Brandon is looking forward to civilian life with pals Steve (Channing Tatum) and Tommy (Joseph Gordon-Levitt), only to find he’s been “stop-lossed,” or contractually forced to return to active duty. Frustrated with the government’s deception, Brandon goes AWOL and hits the road with Steve’s fiancée Michelle (Abbie Cornish, mangling a Texan drawl) in an effort to overturn his contract, finding that only leaving America entirely will solve his problems.

The failure of “Stop-Loss” is amazing to behold considering the excellence of “Boys Don’t Cry.” This isn’t about idiotic cries of a “fair and balanced” view of American troop experiences or other tangled political issues; it concerns Peirce failing the material at nearly every turn of the ham-fisted screenplay, using a jackhammer to sell her zeal when only light tapping was required. It’s a fumbled passion play intended to jab at unfair U.S. policy and further explore the quagmire of Iraq. Instead, “Stop-Loss” features cartoonish lessons on disillusionment and irksome actors trying to blue-steel the crap out of each other.

While watching “Stop-Loss” unfold, I couldn’t help but think of Oliver Stone’s majestic “Born on the Fourth of July,” which covered essentially the same cultural and political terrain, only Stone knew to wield his topic carefully; he made certain primary filmmaking functions were attended to before diving off into personal stances. “Stop-Loss” is a hollow creation by comparison, barely making time to introduce its plethora of characters and their torment before trotting off to the next hackneyed scene of mental combustion.

The failure of this picture doesn’t suggest I believe the military agony offered in “Stop-Loss” is misleading (that would be foolish considering the shape the world is in today), but the hell presented here is devoid of gravitas and rage. It steps into soap opera realms where the actors are incapable of holding an internal thought, instead heaving stiffly-considered words at the screen – perhaps an inch too articulate when placed into the context of blinding frustration.

Peirce wants to spread out her ideas on the futility of the Iraq War and the government’s inability (or flat-out refusal) to protect those in combat. These men and women are open wounds at this point, caught between monolithic ideals of patriotism and the never-ending parade of death that awaits them overseas. The intent of “Stop-Loss” is palpable and commendable, but everything is executed with a fingerless futility that starts with the brainless casting and works its way through the picture’s stunning lack of vision for characterization and resolution.

Just what the hell is Michelle doing following Brandon around the country? Who knows, since Pierce creeps away from the obvious sexual tension like a blushing schoolgirl. Actually, it takes Pierce a full 80 minutes to even address how Michelle is involved in the scenario. The same lack of finesse is found with the Tommy subplot, which never rises above the vet/alcoholic cliché that deserves more careful inspection, or Steve, who comes off more as a vessel for Tatum to try out his new method acting techniques than a rounded character corroded with relatable aggravation. Let’s be honest here: “Stop-Loss” plays like a good hour of footage was removed hastily, turning a considerate examination of emotions into awkward bullet points.

The chasm between intention and execution is abyssal here, and I began to feel disinterest the more “Stop-Loss” kept forcing itself upon the audience. Go rent “Boys Don’t Cry” and you’ll find a movie infatuated with unspoken degrees of longing and violence. “Stop-Loss” is as transparent a statement as you’ll find in this medium, and to originate from a director once held in such high esteem is a truly upsetting development. 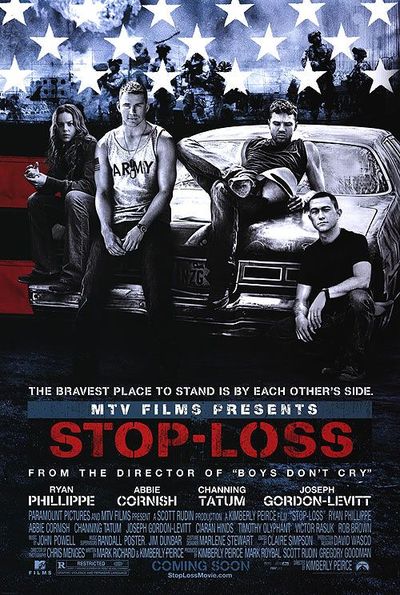