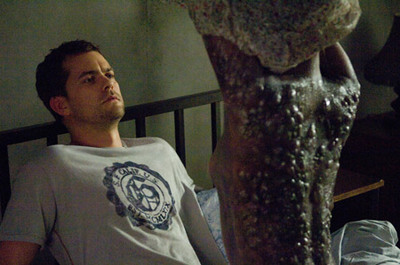 I think the international film industry is running out of hiding places bone-white ghost people can leap out of menacingly. We’ve had television sets, cell phones, and now cameras for the new Asian horror remake, “Shutter,” and all these productions are beginning to look the same.

Newlyweds Jane (Rachael Taylor, “Transformers”) and Benjamin (Joshua Jackson) are sent oversees to Japan to spend their honeymoon furthering Benjamin’s photography career. During travel, the couple slams into a young woman with their car, yet not a single trace of the body remains when they regain consciousness. Perplexed, Jane and Benjamin continue about their business, only to find the same woman in spirit form invading snapshots and terrorizing their home. Pushed to the brink of madness, Jane attempts to uncover who this mysterious creature is, only to stumble upon answers that she finds too horrific to confront.

Reconfigured from a 2004 Thai production, the American “Shutter” is so derivative of other Asian chillers, audiences will easily find themselves one step ahead of every single move the picture makes. It’s a monotonous directorial effort from Japanese filmmaker Masayuki Ochiai, who is either bound to vanilla Hollywood assumptions of how a horror film should walk and talk, or perhaps is just flat-out incapable of producing an interesting composition. It’s difficult to say, but either answer leads back to “Shutter” boring the bejesus out of the audience with its dreary parade of the familiar.

With the aforementioned ghost woman, hostile Japanese locations, and commonplace plotting of righting otherworldly wrongs, “Shutter” limps along, hopeful the few PG-13 scares scattered about will be enough entertainment nutrition to feed the entire film. Ochiai summons no verve to movie, and even worse, no menace. The director leans on his cast to provide the dramatic resonance of the story, but Jackson looks lost with the one-note script and Taylor can’t act, or at least fails to pass off a believable American accent to cover her native Australian. The talent flop around the sets trying to sell the threat of the photo demon, but they both end up looking foolish, and towards the end of the film, understandably bewildered.

Unlike “The Ring,” “The Grudge,” or even this past winter’s “One Missed Call,” I don’t hold bitter animosity towards “Shutter,” I just found it unrelentingly boring and needlessly unimaginative. Ochiai can’t find his footing with this material, and when it falls back on the tried and true barrage of atrocious boo scares and panicky bad acting, my motor skills immediately shut down, waiting numbly for yet another round of reheated Asian horror leftovers to fall prey to third-act absurdity and fade away to bottom-shelf DVD rental obscurity. 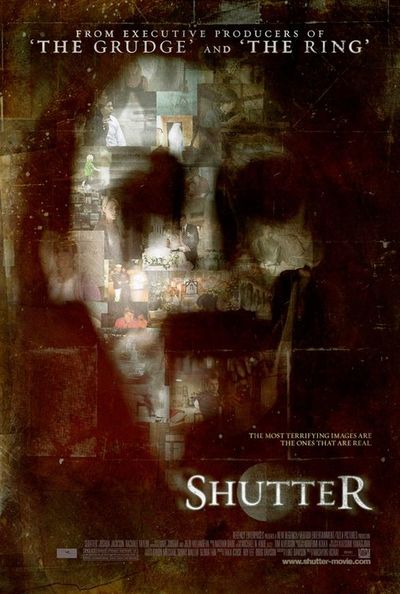